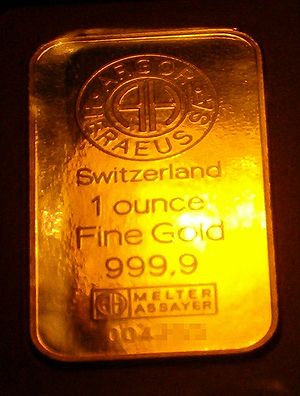 Troy ounce is a traditional unit of gold weight.

Troy weight is a system of units of mass customarily used for precious metals and gemstones. There are 12 troy ounces per troy pound,[1] (373.24 g) rather than the 16 ounces per pound (453.59 g) found in the more common avoirdupois system. The troy ounce is 480 grains, compared with the avoirdupois ounce, which is ​437 1⁄2 grains. Both systems use the same grain defined by the international yard and pound agreement of 1959 as exactly 0.064 798 91 gram.[2] Although troy ounces are still used to weigh gold, silver, and gemstones, troy weight is no longer used in most other applications.

Troy weight probably takes its name from the French market town of Troyes in France where English merchants traded at least as early as the early 9th century.[3][4] The name "troy" is first attested in 1390, describing the weight of a platter, in an account of the travels in Europe of the Earl of Derby.[3][5]

Charles Moore Watson (1844–1916) proposes an alternative etymology: The Assize of Weights and Measures (also known as Tractatus de Ponderibus et Mensuris), one of the statutes of uncertain date from the reign of either Henry III or Edward I, thus before 1307, specifies "troni ponderacionem"—which the Public Record Commissioners translate as "troy weight". The word "troni" refers to markets. Watson finds the dialect word "troi", meaning a balance in Wright's Dialect Dictionary. Troy weight referred to the tower system, the earliest reference to the modern troy weights is in 1414.[6][7]

Before the adoption of the metric system, many systems of troy weights were in use in various parts of Europe, among them Holland troy, Paris troy, etc.[8] Their values varied from one another by up to several percentage points. Troy weights were first used in England in the 15th century, and were made official for gold and silver in 1527.[9] The British Imperial system of weights and measures (also known as Imperial units) was established in 1824, prior to which the troy weight system was a subset of pre-Imperial English units.

The only troy weight in widespread use today is the British Imperial troy ounce and its American counterpart. Both are currently based on a grain of 0.06479891 gram (exact, by definition), with 480 grains to a troy ounce (compared with ​437 1⁄2 grains for an ounce avoirdupois).

The British Empire abolished the 12-ounce troy pound in the 19th century, though it has been retained (although rarely used) in the American system.

The origin of the troy weight system is unknown. Though the name probably comes from the Champagne fairs at Troyes, in northeastern France, the units themselves are probably of more northern origin. English troy weights were apparently derived from the nearly identical troy weight system of Bremen. (The Bremen troy ounce had a mass of 480.8 British Imperial grains.)[10]

An alternate suggestion is that the weights come from the Muslim domains by way of the Gold Dirhem (47.966 British Imperial grains), in the manner that King Offa's weights were derived from the silver Dirhem (about 45.0 British grains).

According to Watson, troy is not linked to the town in France, but a dialect word troi (balance). Then troy weight is a style of weighing, like auncel or bismar weights, or other kindred methods. The troy Weight then refers to weighing as if of small precious or potent goods, such as bullion and medicines.[6]

Comparison of the relative sizes of avoirdupois, Troy, tower, merchant and London pounds

The pennyweight symbol is dwt. There are 24 grains in 1 dwt, and 20 dwt in one troy ounce. Because there were 12 troy ounces in the old troy pound, there would have been 240 pennyweights to the pound—the basis of the fact that the old British pound (currency) contained 240 pence. (However, prior to 1526, English pound sterling was based on the tower pound, which is ​15⁄16 of a troy pound.) The d in dwt stands for denarius, the ancient Roman coin, referred to in the New Testament, that equates loosely to a penny. The symbol d for penny can be recognized in the old-style notation for British pennies, in which a quantity of money expressed in pounds, shillings, and pence was indicated using the symbols £, s, and d, respectively. For example, £6.11s.8d indicated six pounds, eleven shillings, and eight pence.

Mint weights, also known as moneyers' weights were legalised by Act of Parliament dated 17 July 1649 entitled An Act touching the monies and coins of England. A grain is 20 mites, a mite is 24 droits, a droit is 20 perits, a perit is 24 blanks.[11]

In Scotland, the Incorporation of Goldsmiths of the City of Edinburgh used a system in multiples of sixteen. (See Assay-Master's Accounts, 1681–1702, on loan from the Incorporation to the National Archives of Scotland.) Thus, there were 16 drops to the troy ounce, 16 ounces to the troy pound, and 16 pounds to the troy stone. The Scots had several other ways of measuring precious metals and gems, but this was the common usage for gold and silver.

The Pound was 7716 BI grains, but after the union, rounded to 7680 BI grains. This divides to 16 ounces, each of 16 drops, each of 30 grains. The rounding makes the ounce and grain equal to the English standard.

The troy system was used in the apothecaries' system, but with different further subdivisions.

King Offa's currency reform replaced the sceat with the silver penny. This coin was derived from half of a silver dirhem. The weights were then derived by a count of coins, by a mix of Charlemagne and Roman systems. A shilling was set to twelve pence, an ounce to twenty pence, and a pound to twelve ounces or twenty shillings. The penny was quite a lot of money, so weight by coins was not a general practice.

Later kings debased the coin, both in weight and fineness. The original pound divided was the tower pound of 5400 grains, but a later pound of 5760 grains displaced it. Where once 240 pence made a tower pound (and 256 make a troy pound), by the time of the United Kingdom Weights and Measures Act of 1824, a troy pound gives 792 silver pence, still minted as such as Maundy Money.

Sterling originally referred to the Norman silver penny of the late 11th century. The coin was minted to a fineness of 11 oz, 2 dwt (in the pound), or .925 Millesimal fineness.