The "trusty system" (sometimes homophonically though perhaps incorrectly called "trustee system") was a strict system of discipline and security in the United States made compulsory under Mississippi state law (but also used in other states, such as Arkansas, Alabama, Louisiana, New York and Texas) as the method of controlling and working inmates at Mississippi State Penitentiary at Parchman, Mississippi's only prison. It was designed to replace convict leasing. Under this system, designated inmates were used by staff to control and administer physical punishment to other inmates according to a strict prison-determined inmate hierarchy of power.[1] The case of Gates v. Collier (Gates v. Collier Prison Reform Case, 1970–1971) ended the flagrant abuse of inmates under the trusty system and other prison abuses which had continued essentially unchanged since the building of the prison in 1903 in Mississippi. Other states using the trusty system were also forced to give it up under this ruling.[2]

Parchman Farm, as the prison was originally called, was built in 1903 on the rich soil of the Mississippi Delta. By Mississippi law, the prison was required to pay for itself and even make a profit for the state. This essentially meant the State was entering into business, using no-cost labor. This was harmful to normal businesses, which had to bear the normal cost of labor. The prison warden was in complete control of the prison, without outside interference. Its operations essentially remained much the same from 1903 until the Gates v. Collier Prison Reform Case (1970–1971) forced it to change. In 1911, the New York Times wrote an article praising the Mississippi prison system for its for-profit approach to incarceration.[3] 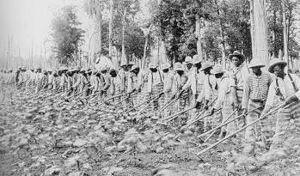 Prison labor at the Parchman Farm under the trusty system

The prison had approximately 16,000 acres (65 km2) of farmland and grew such cash crops as cotton as well as engaged in livestock production. Although the population of the prison was around 1,900 inmates (two thirds of whom were black and in segregated units), by law only a maximum of 150 staff members were allowed to be hired to minimize operating costs. Thus the farm labor was done by inmates. The bulk of guarding and disciplining of the inmates was performed by inmate trusties. They also performed most of the administrative work, supervised by a few employees. Therefore, the inmate trusties essentially controlled inmate care and custody.[1] Essentially, the trusties ran the prison system.[4]

Highest in the prison inmate hierarchy were the inmates armed with rifles, called the "trusty shooters". Their job was to act as prison guards and control other inmates on a day-to-day basis in the residential camps or out on the field work crews. Next came the unarmed trusties who performed janitorial, clerical and other menial tasks for the prison's staff. Simple tasks, such as distributing medication, were carried out by other categories of inmates such as "hallboys". Inmate trusties enforced discipline within the prison inmate living quarters (16 different residential camps) and in the work camps and farms. In addition to punishment administered on site, inmate trusties could recommend further punishment in the special punishment area for disobedient or disruptive inmates.[5]

According to attorney Roy Haber who handled the series of litigation cases brought by the American Civil Liberties Union against the Trusty system, inmates were whipped with leather straps for failing to pick their daily quota of cotton. The farm's camps of black inmates were supervised by one white sergeant, while under him the black inmate "trusty shooters", serving sentences for murder, carried rifles and enforced discipline.[6]

The case of Gates v. Collier (Gates v. Collier Prison Reform Case, 1970–1971) ended the flagrant abuse of inmates under the Trusty system and other prison abuses which had continued essentially unchanged since the building of the prison in 1903.[2][7] On October 20, 1972, federal judge William Keady ordered the end of racial segregation in prison residential quarters. He also required replacement of trusty shooters with civilian prison guards.[8][9]

Any system where inmates were allowed to be in a position of authority and control other inmates, or use physical abuse or intimidation of other inmates, was abolished.[10][11] It also found some types of corporal punishment were a violation of an inmate's Eighth Amendment rights, including “handcuffing inmates to the fence and to cells for long periods of time, ... and forcing inmates to stand, sit or lie on crates, stumps, or otherwise maintain awkward positions for prolonged periods.”[12]

In Hope v. Pelzer, a case in which a former inmate sued the prison superintendent for personal injury suffered under the Trusty system, its structure and abuses were detailed.[1]

Other states utilizing the trusty system, such as Arkansas,[13] Alabama, Louisiana and Texas were also forced to abolish it under the Gates v. Collier rulings.[12] However, some states, such as Texas[14] nonetheless continued their use of 'trusty' systems (known as "building tenders") until the 1980s when Federal Judge William Wayne Justice, in the case of Ruiz v. Estelle, 503 F. Supp. 1265 (S.D. Tex. 1980), compelled Texas to replace its trusty system with the strictly regulated "Support Service Inmate" (SSI) system.