The Tunisian National Dialogue Quartet (Arabic: الرباعي التونسي للحوار الوطني‎‎, French: Quartet du dialogue national) is a group of four organizations that were central in the attempts to build a pluralistic democracy in Tunisia in the wake of the Jasmine Revolution of 2011.[1]

In 2011, Tunisia was experiencing a revolution. In its wake, the stability and security of the country were considerably compromised.[6][7] After the creation of the Assemblée nationale constituante (Constituent Assembly of Tunisia) of 2011, the writing of a new constitution proved difficult and the one-year deadline for its final ratification passed without much progress.[8] During this time, the government was criticized for its lax attitude towards radical Islamists.[8] Several attacks took place; the most widely reported was the assassination of Chokri Belaïd on 6 February 2013.[8][9] 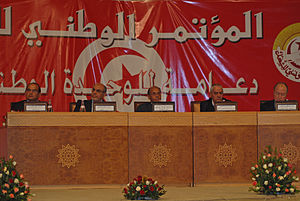 Consequently, tensions between the Tunisian government's Islamist majority and its opposition increased.[10] There were huge opposition-led protests in the summer of 2013 which threatened the continued existence of the national government at that time. After the assassination of Mohamed Brahmi on 25 July 2013, Belaïd and Brahmi's group, Popular Front, banded with the other opposition parties into a group named the National Salvation Front. This group organized the Bardo street protest,[clarification needed] calling for the government to resign.[8][9][10] In addition, 42 opposition members withdrew from the Assembly.[8] From 6 August 2013, the Assembly was unable to carry on normal functioning.[8]

Given the critical situation, the Tunisian General Labour Union took the first step in forming an alliance of civil societies by approaching the Tunisian Confederation of Industry, Trade and Handicrafts, considered their historical rival. The Tunisian Human Rights League and the Tunisian Order of Lawyers later joined.[11] The role of the UGTT throughout the Jasmine Revolution and transition period was recently discussed in the following journal article, "No Ordinary Union: The Role of the UGTT in the Tunisian path to revolution and transition" (Workers of the World, Volume I, Number 7, November 2015).[12]

The regional context of violent exacerbation, coupled with the local discontent against Ennahdha’s performance in office, has put a huge question mark on the Tunisian transition. Although Ennahdha claimed to be a moderate political party, its perceived failure to fight extremist groups and its perceived dual speech has strengthened the belief of anti ennahdha people who claimed that this local branch of the Muslim brotherhood was a light cover for more extreme Islamic groups. The political assassinations against two opposition leaders, Chokri Belaid and Mohamed Brahmi, and the killing of Tunisian soldiers by Islamist terrorists in 2013, will polarize public opinion even more. Huge demonstrations started in the summer of 2013 in Bardo asking for both the constitutional assembly and the government to be dissolved. People wanted democracy to succeed, but not at the expense of security and progressive reform. Ennahdha, was committed to remain in office, and claimed its democratic legitimacy over power. Nidaa Tounes and the opposition argued that although Ennahdha access to power was democratic, the transition was supposed to last 1 year only and had one main objective: the drawing of a new democratic and consensual constitution for the country. 1 year and a half after Ennahdha accession to power, the constitution was far from being completed. The political debate was near a dead-end, and non-political actors will have to step in to find a solution. Civil society will step in a forge a national dialogue initiative to prevent Tunisia’s transition to democracy to fail: the Tunisian National Dialogue Quartet was constituted on that premise.

On 17 September 2013, the four organizations drafted an agreement between the parties suggesting compromises that would allow negotiations to commence.[8] This draft roadmap had four main points: the resignation of the government and its replacement by an "independent technocratic" government, the choice of fixed dates for parliamentary recesses and elections (including presidential elections), the agreement to preserve national identity in the new constitution, and negotiation of the steps necessary for the transition to a democratic government (including deadlines for each).[8][13]

Each political party had to accept the roadmap if it wanted to participate in the negotiations.[8] Twenty-one parties from both sides signed the agreement, making the national dialogue possible.[8] The only major party that refused to participate was the party of interim president Moncef Marzouki, the Congress for the Republic, which was one of the three parties in power.

The first dialogue session took place on 5 October 2013, at the Palais des Congrès in Tunis.[14] During the discussions, a slip of the tongue (substituting the similarly pronounced Arabic word "jackass" in place of "dialogue") by Abdessattar Ben Moussa, president of the Tunisian Human Rights League caused gales of laughter among the delegates, even Rached Ghannouchi, president of the Ennahdha party.[15]

After the initial session, subsequent talks continued regularly, under the aegis of the quartet, at the Transitional Ministry of Human Rights and Justice.[16] During these discussions, the Quartet played an active role which was considered important to the success of these talks.[13] They led to the choosing of Mehdi Jomaa as Prime Minister on 14 December, the resignation of the government of Ali Larayedh on 9 January 2014, the ratification of the new constitution on 24 January and presidential elections in December.[8][17][18][19]

On 9 October 2015, the quartet won the 2015 Nobel Peace Prize "for its decisive contribution to the building of a pluralistic democracy in Tunisia in the wake of the Jasmine Revolution of 2011".[3]

Kaci Kullmann Five, head of the Nobel Committee, said: "It established an alternative peaceful political process at a time when the country was on the brink of civil war".[20] The Nobel committee said it hopes Tunisia will serve as an example for other countries.