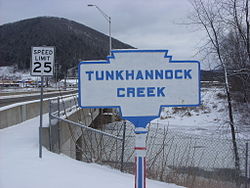 Tunkhannock is a borough in Wyoming County, Pennsylvania, 31 miles (50 km) northwest of Wilkes-Barre. In the past, lumbering was carried on extensively. Today, many residents are employed by the Procter & Gamble plant in nearby Washington Township. As of the 2010 census, the borough population was 1,836. It is the county seat of Wyoming County.[1] Tunkhannock is in the Scranton–Wilkes-Barre–Hazleton, PA Metropolitan Statistical Area.

The name Tunkhannock comes from the Minsi-Len'api term Ptuk'hanna'unk, which means "Bend-in-river-place," especially to the town's west, upstream at the radical bend called "The Neck."[2] Modern Tunkhannock, Lackawanna County, The Tunkhannock Historic District, bounded by Tioga, Pine, and Harrison Sts and Wyoming Ave, was added to the National Register of Historic Places in August 2005.[3]

Tunkhannock is home to the Wyoming County Historical Society and Genealogical Library. The library offers a major source of research material to the public. The collection includes numerous books on New England ancestry, newspapers dating back to 1797 and census records for Wyoming and surrounding counties from 1790 to 1930. Also on file are records for over 90 area cemeteries as well as various other information about local history.

Tunkhannock is also the home of the Northern Tier Symphony Orchestra, under the direction of Conductor Robert Helmacy.[4]

According to the United States Census Bureau, the borough has a total area of 0.9 square mile (2.3 km²), all of it land.

Skyhaven Airport is a public use airport located one nautical mile (1.85 km) south of the central business district of Tunkhannock.[6]

There are 817 households out of which 25.3% have children under the age of 18 living with them, 38.7% are married couples living together, 12% have a female householder with no husband present, and 45.3% are non-families. 40.4% of all households are made up of individuals and 20% have someone living alone who is 65 years of age or older. The average household size is 2.15 and the average family size is 2.92. 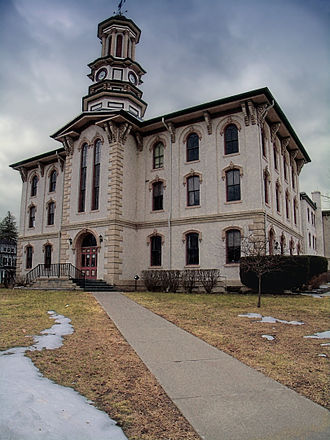 The borough is represented by a council-manager government.