The navy can trace its lineage back to the first Turkish fleets to sail the Aegean in the late 11th century, the fleets of the Anatolian beyliks in the 14th century, and, more immediately, to the Ottoman Navy. However, the modern naval traditions and customs of the Turkish Navy can be traced back to 10 July 1920, when it was established as the Directorate of Naval Affairs during the Turkish War of Independence led by Mustafa Kemal Atatürk. Since July 1949, the service has been officially known as the Turkish Naval Forces.

In 2008, the Turkish Navy had a reported active personnel strength of 48,600; this figure included an Amphibious Marines Brigade as well as several Special Forces and Commando detachments.[3] As of early 2015, the navy operates a wide variety of ships and 51 maritime aircraft.

Following the demise of the Ottoman Empire in the aftermath of World War I, on November 3, 1918, the fleet commander of the Ottoman Navy, Liva Amiral Arif Pasha, ordered all flags to be struck on all warships lying in the Golden Horn and the Ottoman Navy ceased to exist.[6] The major surface combatants of the former Ottoman fleet (totalling 62,000 tons) were rendered inactive by the Allies and in accordance with the terms of the Armistice of Mudros, the warships were disarmed during the last week of 1918. The battleship Turgut Reis and the cruisers Hamidiye and Mecidiye were substantially limited and kept inactive inside the Golden Horn by the occupying forces.[7] Due to its larger size, the battlecruiser Yavuz Sultan Selim was transferred to the Gulf of Izmit on the grounds that she could adversely affect the sea traffic inside the Golden Horn;[7] while her ammunition and guns were removed.[7] During this period, only a small number of Ottoman Navy vessels were allowed by the Allies to remain on active coast guard duties and were released from internment on 26 February 1919;[6] such as the torpedo boats Akhisar and Dıraç which patrolled the Sea of Marmara, the gunboat Hızır Reis which patrolled the Gulf of İzmir, and the minelayers Nusret and Tir-i Müjgan which conducted mine cleaning operations in the Gulf of Saros.[7]

Before the Turkish War of Independence began, the Bahriye Nazırlığı (Naval Ministry) sent the gunboat Preveze to Sinop and the gunboat Aydın Reis to Trabzon in February 1919 for surveillance, reconnaissance and patrol duties.[7] However, a lack of coal to fuel their propulsion systems caused the Preveze and Aydın Reis to remain in harbour until the end of 1919.[7] During the early stages of the Turkish War of Independence, these two gunboats did not return to Istanbul, despite heavy pressure from the Ottoman government and the Allies.[7] Instead, they were placed under the command of the Turkish liberation forces led by Mustafa Kemal Atatürk and headquartered in Ankara.[7]

A large number of the naval officers and students of the Naval Academy went to Anatolia for participating in the Turkish War of Independence. On 10 July 1920, the Directorate of Naval Affairs (Umur-u Bahriye Müdürlüğü) was founded in Ankara under the Ministry of National Defense and was given the duty of organizing and maintaining strategic logistical shipping through the Black Sea in order to provide the Turkish liberation forces in Anatolia with weapons and other supplies.[7] All existing naval institutions in the parts of Anatolia that were administered by the Ankara government were assigned to this Directorate.[7] The Directorate of Naval Affairs was extremely successful in organizing local surface units and volunteers and in forming an intelligence network to discover the movements of the enemy ships.[7] As a result, logistic transportation was carried out effectively.[7] The Turkish Grand National Assembly in Ankara made an agreement with the Soviet Union to procure supplies for the Turkish liberation forces.[7] Aydın Reis left from Samsun (on 16 September 1920) and Preveze left from Trabzon (on 30 September 1920) for Novorossiysk in order to transport weapons, other supplies and financial aid to the Turkish liberation forces.[6][7] The Trabzon Shipping Detachment, which was founded on 21 September 1920, was renamed as the Trabzon Naval Shipping Command with the directive issued by the Ministry of National Defense on 26 October 1920.[7] On January 1, 1921, the Samsun Naval Command was formed.[8] In the subsequent stages of the Turkish War of Independence, due to the growing need for maritime shipping and the increase in the quantity and quality of the units and small ships, the organizational structure of the Directorate of Naval Affairs was gradually extended.[7]

In the same period, a number of Turkish civilian seamen formed a group under the name of the Naval Aid Organization (Muavenet-i Bahriye).[8] This group secretly obtained cannons, light weapons, ammunition, landmines and ordnance from the former Ottoman military warehouses in Istanbul that were under the control of the occupying Allies and sent them to the Turkish liberation forces in Anatolia with civil water transportation crafts.[8]

Presidency of the Naval Department

On 1 March 1921, the Directorate of Naval Affairs was transformed into the Presidency of the Naval Department (Bahriye Dairesi Reisliği) and had control over the Naval Commands in Samsun, Amasra and İzmit (formed on 28 June 1921); the Naval Transport Detachment in Trabzon; the Naval Transport Command in Ereğli; the Naval Detachment in Lake Eğirdir; and the Naval Liaison Group in Fethiye (formed on 16 March 1921.)[7] During the War of Independence, Turkish naval forces transported 220,000 tons of weapons, ammunition and equipment to the land forces in Anatolia.[8]

Ministry of the Navy

Following the Armistice of Mudanya on 11 October 1922, the former Ottoman Ministry of the Navy (Bahriye Nazırlığı) building in the Kasımpaşa quarter of Istanbul, on the Golden Horn, became the headquarters of the Istanbul Naval Command on 14 November 1922.[7] The establishment of the Ministry of the Navy (Bahriye Vekâleti) of the Republic of Turkey, headquartered in Ankara, was decided by the Grand National Assembly on 29 December 1924, and Topçu İhsan Bey (İhsan Eryavuz) was appointed the first (and only) Naval Minister of Turkey.[9][10] When the Republic of Turkey was established on 29 October 1923, the former Ottoman vessels that remained under Turkish control were as follows:[11]

Preparations were made to carry out the maintenance and overhaul of small-tonnage warships (the three Taşoz-class destroyers and the gunboats Burak Reis, Sakız, İsa Reis and Kemal Reis) and to make them combat-ready.[7] Thus, the cruiser Hamidiye, which was planned to be employed as a Cadet Training Ship, was overhauled.[7]

During the 1920s, a commitment to refurbish the battlecruiser TCG Yavuz (which remained in active service until 1950) as the centerpiece of the republic's fleet was the only constant element of the various naval policies which were put forward.[12] The battlecruiser remained in İzmit until 1926, in a neglected state:[13][14][15] only two of her boilers worked, she could not steer or steam, and she still had two unrepaired scars from the mine damage in 1918. Enough money was raised to allow the purchase of a new 26,000-metric-ton (26,000-long-ton) floating dock from the German company Flender,[7] as Yavuz could not be towed anywhere without risk of her sinking in rough seas.[16] The French company Atelier et Chantiers de St. Nazaire-Penhöet was contracted in December 1926 to oversee the subsequent refit, which was carried out by the Gölcük Naval Shipyard.[14] Since the Treaty of Lausanne in 1923 required the disarmament of the Turkish Straits, the infrastructures belonging to the Turkish Naval Forces on the Bosphorus (in Istinye) and on the Golden Horn were transferred to Gölcük.[7] In this period, Gölcük was designated as the main Turkish naval base.[7]

The overhaul works of TCG Yavuz proceeded over three years (1927–1930); they were delayed when several compartments of the dock collapsed while being pumped out. Yavuz was slightly damaged before she could be refloated and the dock had to be repaired before the overhaul works could be resumed. The Minister of the Navy, İhsan Eryavuz, was convicted of embezzlement in the resulting investigation which became known as the Yavuz-Havuz case (havuz meaning "dock" in Turkish naval engineering terminology.)[16] The investigation revealed that Ihsan Eryavuz had reduced the insurance obligation of the French company (Atelier et Chantiers de St. Nazaire-Penhöet) from 5 million to 1.5 million Turkish liras, and was convicted guilty of fraud,[17] which resulted in the abolition of the Ministry of the Navy on 27 December 1927.[8][18]

Undersecretariat of the Sea

Following the dissolution of the Ministry of the Navy, the naval forces were reorganized under the Ministry of National Defense[10] and on 16 January 1928[18] the Undersecretariat of the Sea (Deniz Müsteşarlığı) was established in order to undertake the duties of the former Ministry of the Navy.[8] With this new reorganization, the Turkish Fleet Command was put under the command of the Turkish General Staff in terms of administration and logistics.[7] On 2 November 1930, the Naval War College (Deniz Harp Akademisi) commenced training and education of Staff Officers at its facilities in the Yıldız Palace.[7] During World War II, the naval schools were temporarily relocated from Istanbul to Mersin for security reasons and conducted education and training activities in this city.[7]

In 1933, with the approval of the Turkish Grand National Assembly, Gölcük was designated as the main base of the Turkish Navy.[7] In the same year, the first new ship built at the Gölcük Naval Shipyard, the tanker TCG Gölcük, was laid down; and launched the following year.[7] With the signing of the Montreaux Convention in 1936, Turkey’s sovereignty over the Turkish Straits was internationally recognized, and Fortified Area Commands were founded on the Bosphorus and Dardanelles straits, with Naval Detachments assigned to these Commands.[7] 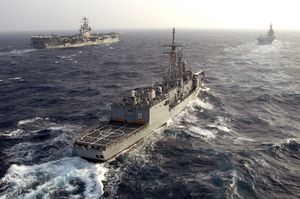 Turkish frigate F-495 TCG Gediz (center) escorting the U.S. aircraft carrier USS Harry S. Truman (left) and the Italian aircraft carrier Giuseppe Garibaldi (right) during the NATO exercise Majestic Eagle 2004 in the Atlantic Ocean.
File:TGS Oruçreis.jpg
Turkish frigate F-245 TCG Oruç Reis departing from Portsmouth Naval Base in the United Kingdom, on September 21, 2009. Off the bows in the distance is Fort Gilkicker, and beyond (to the left) the Isle of Wight.

As of 2015, the navy operates a wide variety of ships, including; 16 frigates, 8 corvettes, 13 submarines, 23 missile boats, 28 patrol boats, 32 mine countermeasures vessels, 29 landing ships, and various auxiliary ships. In 2002, the total displacement of the Turkish Navy was approximately 259,000 tonnes.[19]

The Turkish Navy operates a total of 51 aircraft, including 14 fixed-wing aircraft and 37 helicopters. 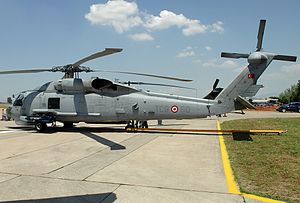 A Sikorsky S-70B-28 Seahawk of the Turkish Naval Forces. 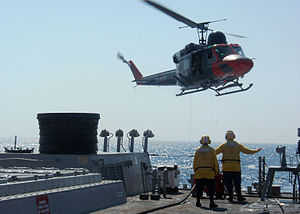 An Agusta-Bell AB-212 ASW of the Turkish Naval Forces.

Future of the Turkish Navy

File:TCG Heybeliada (F-511) -1.jpg
F-511 TCG Heybeliada is the lead ship of the MILGEM project next generation corvettes and frigates of the Turkish Naval Forces. 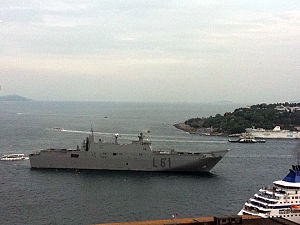 The SEDEF–Navantia consortium won the tender for the LPD/LHD project and will build the Turkish variant of the Juan Carlos I (L61) class BPE for the Turkish Naval Forces.[27][28][29][30][31]