From Infogalactic: the planetary knowledge core
Jump to: navigation, search
This article is about the 1964 U.S. Constitution Amendment. For the failed proposal to amend the Constitution of Ireland, see Twenty-fourth Amendment of the Constitution Bill, 2001 (Ireland).

The Twenty-fourth Amendment (Amendment XXIV) of the United States Constitution prohibits both Congress and the states from conditioning the right to vote in federal elections on payment of a poll tax or other types of tax. The amendment was proposed by Congress to the states on August 27, 1962, and was ratified by the states on January 23, 1964.

Southern states of the former Confederacy adopted poll taxes in laws of the late 19th century and new constitutions from 1890 to 1908, after the Democratic Party had generally regained control of state legislatures decades after the end of Reconstruction, as a measure to prevent African Americans and often poor whites from voting. Use of the poll taxes by states was held to be constitutional by the Supreme Court of the United States in the 1937 decision Breedlove v. Suttles.

When the 24th Amendment was ratified in 1964, five states still retained a poll tax: Virginia, Alabama, Texas, Arkansas, and Mississippi. The amendment prohibited requiring a poll tax for voters in federal elections. But it was not until 1966 that the U.S. Supreme Court ruled 6–3 in Harper v. Virginia Board of Elections that poll taxes for any level of elections were unconstitutional. It said these violated the Equal Protection Clause of the Fourteenth Amendment. Subsequent litigation related to potential discriminatory effects of voter registration requirements has generally been based on application of this clause.

Section 2. The Congress shall have power to enforce this article by appropriate legislation.[1]

Poll tax
Cumulative poll tax (missed poll taxes from prior years must also be paid to vote)
No poll tax
History of the poll tax by state from 1868–1966.

Southern states adopted the poll tax as a requirement for voting as part of a series of laws intended to marginalize black Americans from politics so far as practicable without violating the Fifteenth Amendment. This required that voting not be limited by "race, color, or previous condition of servitude." All voters were required to pay the poll tax, but in practice it most affected the poor. Notably this impacted both African Americans and poor white voters, some of whom had voted with Populist and Fusionist candidates in the late 19th century, temporarily disturbing Democratic rule. Proponents of the poll tax downplayed this aspect and assured white voters they would not be affected. Passage of poll taxes began in earnest in the 1890s, as Democrats wanted to prevent another Populist-Republican coalition. Despite election violence and fraud, African Americans were still winning numerous local seats. By 1902, all eleven states of the former Confederacy had enacted a poll tax, many within new constitutions that contained other provisions to reduce voter lists, such as literacy or comprehension tests. The poll tax was used together with grandfather clauses and the "white primary", and threats of violence. For example, potential voters had to be "assessed" in Arkansas, and blacks were utterly ignored in the assessment.[2]

From 1900–1937, such use of the poll tax was nearly ignored by the federal government. Some state-level initiatives repealed it. The poll tax survived a legal challenge in the 1937 Supreme Court case Breedlove v. Suttles, which ruled that "[The] privilege of voting is not derived from the United States, but is conferred by the state and, save as restrained by the Fifteenth and Nineteenth Amendments and other provisions of the Federal Constitution, the state may condition suffrage as it deems appropriate."[3]

The issue remained prominent, as most African Americans in the South were disenfranchised. President Franklin D. Roosevelt spoke out against the tax. He publicly called it "a remnant of the Revolutionary period" that the country had moved past. However, Roosevelt's favored liberal Democrats lost in the 1938 primaries to the reigning conservative Southern Democrats, and he backed off the issue. He felt that he needed Southern Democratic votes to pass New Deal programs and did not want to further antagonize them.[4] Still, efforts at the Congressional level to abolish the poll tax continued. A 1939 bill to abolish the poll tax in federal elections was tied up by the Southern Block, lawmakers whose long tenure in office from a one-party region gave them seniority and command of numerous important committee chairmanships. A discharge petition was able to force the bill to be considered, and the House passed the bill 254–84.[5] However, the bill was unable to defeat a filibuster in the Senate by Southern senators and a few Northern allies who valued the support of the powerful and senior Southern seats. This bill would be re-proposed in the next several Congresses. It came closest to passage during World War II, when opponents framed abolition as a means to help overseas soldiers vote. However, after learning that the US Supreme Court decision Smith v. Allwright (1944) banned use of the "white primary," the Southern block refused to approve abolition of the poll tax.[6]

In 1946, the Senate came close to passing the bill. 24 Democrats and 15 Republicans approved an end to debate, while 7 non-southern Democrats and 7 Republicans joined with the 19 Southern Democrats in opposition. The result was a 39-33 vote in favor of the bill, but the filibuster required a two-thirds supermajority to break at the time; a 48-24 vote was required to pass the bill.[clarification needed] Those in favor of abolition of the poll tax considered a constitutional amendment after the 1946 defeat, but that idea did not advance either.[7]

The tenor of the debate changed in the 1940s. Southern politicians tried to shift the debate to Constitutional issue, but private correspondence indicates that black disenfranchisement was still the true concern. For instance, Mississippi Senator Theodore Bilbo declared, "If the poll tax bill passes, the next step will be an effort to remove the registration qualification, the educational qualification of Negroes. If that is done we will have no way of preventing the Negroes from voting."[8] This fear explains why even Southern Senators from states that had abolished the poll tax still opposed the bill; they did not want to set a precedent that the federal government could interfere in state elections.

President Harry S. Truman established the President's Committee on Civil Rights, which among other issues investigated the poll tax. Considering that opposition to federal poll tax regulation in 1948 was claimed as based on the Constitution, the Committee noted that a constitutional amendment might be the best way to proceed. Still, little occurred during the 1950s. Members of the anti-poll tax movement laid low during the anti-Communist frenzy of the period; some of the main proponents of poll tax abolition, such as Joseph Gelders and Vito Marcantonio, had been committed Marxists.[9]

President John F. Kennedy returned to this issue. His administration urged Congress to adopt and send such an amendment to the states for ratification. He considered the constitutional amendment the best way to avoid a filibuster, as the claim that federal abolition of the poll tax was unconstitutional would be moot. Still, some liberals opposed Kennedy's action, feeling that an amendment would be too slow compared to legislation.[10] Spessard Holland, a conservative Democrat from Florida, introduced the amendment to the Senate. Holland opposed most civil rights legislation during his career,[11] and Kennedy's gaining of his support helped splinter monolithic Southern opposition to the Amendment. Ratification of the amendment was relatively quick, taking slightly more than a year; it was rapidly ratified by state legislatures across the country from August 1962 to January 1964.

President Lyndon B. Johnson called the amendment a "triumph of liberty over restriction" and "a verification of people's rights."[12] States that maintained the poll tax were more reserved. Mississippi's Attorney General, Joe Patterson, complained about the complexity of two sets of voters - those who paid their poll tax and could vote in all elections, and those who had not and could only vote in federal elections.[12] Additionally, non-payers of the poll tax could still be deterred by requirements that they register far in advance of the election and retain records of such registration.[13] States such as Alabama also exercised discrimination in the application of literacy tests. 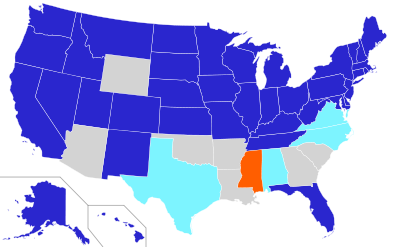 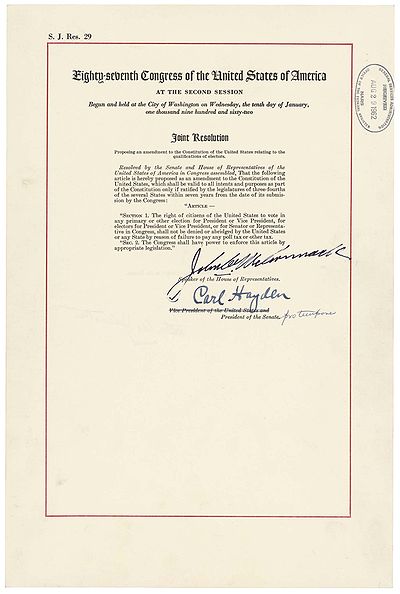 Congress proposed the Twenty-fourth Amendment on August 27, 1962.[14][15] The amendment was submitted to the states on September 24, 1962, after it passed with the requisite two-thirds majorities in the House and Senate.[12] The following states ratified the amendment:

Ratification was completed on January 23, 1964. The Georgia legislature did make a last-second attempt to be the 38th state to ratify. This was a surprise as "no Southern help could be expected"[13] for the amendment. The Georgia Senate quickly and unanimously passed it, but the House did not act in time.[12] Georgia's ratification was apparently dropped after South Dakota's ratification.

The amendment was subsequently ratified by the following states:

The amendment was specifically rejected by the following state:

The following states have not ratified the amendment:

Arkansas effectively repealed its poll tax for all elections with Amendment 51 to the Arkansas Constitution at the November 1964 general election, several months after this amendment was ratified. The poll-tax language was not completely stricken from its Constitution until Amendment 85 in 2008.[16] Of the five states originally affected by this amendment, Arkansas was the only one to repeal its poll tax; the other four retained their taxes until they were struck down in 1966 by the US Supreme Court decision in Harper v. Virginia Board of Elections (1966), which ruled poll taxes unconstitutional even for state elections. Federal district courts in Alabama and Texas, respectively, struck down their poll taxes less than two months before the Harper ruling was issued.

The state of Virginia accommodated the amendment by providing an "escape clause" to the poll tax. In lieu of paying the poll tax, a prospective voter could file paperwork to gain a certificate establishing a place of residence in Virginia. The papers would have to be filed six months in advance of voting and the voter had to provide a copy of certificate at the time of voting. This measure was expected to decrease the number of legal voters.[17] In the 1965 Supreme Court decision Harman v. Forssenius, the Court unanimously found such measures unconstitutional. It declared that for federal elections, "the poll tax is abolished absolutely as a prerequisite to voting, and no equivalent or milder substitute may be imposed."[18]

While not directly related to the Twenty-fourth Amendment, the Supreme Court case Harper v. Virginia Board of Elections (1966) ruled that the poll tax was unconstitutional at every level, not just for federal elections. The Harper decision relied upon the Equal Protection Clause of the Fourteenth Amendment, rather than the Twenty-Fourth Amendment. As such, issues related to whether burdens on voting are equivalent to poll taxes in discriminatory effect have usually been litigated on Equal Protection grounds since.