The Twenty-sixth Amendment (Amendment XXVI) to the United States Constitution prohibits the states and the federal government from using age as a reason for denying the right to vote to citizens of the United States who are at least eighteen years old. The drive to lower the voting age from 21 to 18 grew across the country during the 1960s, driven in large part by the broader student activism movement protesting the Vietnam War. The impetus for drafting an amendment to lower the voting age arose following the Supreme Court's decision in Oregon v. Mitchell, 400 U.S. 112 (1970), which held that Congress may establish a voting age for federal elections, but not for state or local elections.

On March 23, 1971, a proposal to extend the right to vote to citizens eighteen years of age and older was adopted by both houses of Congress and sent to the states for ratification. The amendment became part of the Constitution on July 1, 1971, three months and eight days after the amendment was submitted to the states for ratification, making this amendment the quickest to be ratified.

Section 1. The right of citizens of the United States, who are eighteen years of age or older, to vote shall not be denied or abridged by the United States or by any State on account of age.

Section 2. The Congress shall have the power to enforce this article by appropriate legislation.[1]

Senator Harley Kilgore began advocating for a lowered voting age in 1941 in the 77th Congress.[2] Despite the support of fellow senators, representatives, and First Lady Eleanor Roosevelt, Congress failed to pass any national change. However, public interest in lowering the vote became a topic of interest at the local level. In 1943 and 1955 respectively, the Georgia and Kentucky legislatures passed measures to lower the voting age to 18.[3]

President Dwight D. Eisenhower, in his 1954 State of the Union address, became the first president to publicly state his support for prohibiting age-based denials of suffrage for those 18 and older.[4] During the 1960s, both Congress and the state legislatures came under increasing pressure to lower the minimum voting age from 21 to 18. This was in large part due to the Vietnam War, in which many young men who were ineligible to vote were conscripted to fight in the war, thus lacking any means to influence the people sending them off to risk their lives. "Old enough to fight, old enough to vote," was a common slogan used by proponents of lowering the voting age. The slogan traced its roots to World War II, when President Franklin D. Roosevelt lowered the military draft age to eighteen.

In 1963, the President's Commission on Registration and Voting Participation, in its report to President Johnson, further encouraged considering lowering the voting age. Historian Thomas H. Neale argues that the move to lower the voting age followed a historical pattern similar to other extensions of the franchise; with the escalation of the war in Vietnam, constituents were mobilized and eventually a constitutional amendment passed.[5]

In 1970, Senator Ted Kennedy proposed amending the Voting Rights Act of 1965 to lower the voting age nationally.[6] On June 22, 1970, President Richard Nixon signed an extension of the Voting Rights Act of 1965 that required the voting age to be 18 in all federal, state, and local elections.[7] In his statement on signing the extension, Nixon said:

Subsequently, Oregon and Texas challenged the law in court, and the case came before the Supreme Court in 1970 as Oregon v. Mitchell.[9] By this time, four states had a minimum voting age below 21 including Georgia, Kentucky, Alaska and Hawaii.[10][11]

During debate of the 1970 extension of the Voting Rights Act, Senator Ted Kennedy argued that the Equal Protection Clause of the Fourteenth Amendment allowed Congress to pass national legislation lowering the voting age. In the 1966 decision of Katzenbach v. Morgan, the Supreme Court had ruled that "if Congress acts to enforce the 14th Amendment by passing a law declaring that a type of state law discriminates against a certain class of persons, the Supreme Court will let the law stand if the justices can 'perceive a basis' for Congress's actions".[12]

President Nixon disagreed with Kennedy. In a letter to the Speaker of the House and the House minority and majority leaders, he asserted that the issue is not whether the voting age should be lowered, but how; in his own interpretation of the Katzenbach case, Nixon argued that to include age as something discriminatory would be too big of a stretch and voiced concerns that the damage of a Supreme Court decision to overturn the Voting Rights Act could be disastrous.[13]

In Oregon v. Mitchell (1970), the Supreme Court considered whether the voting-age provisions Congress added to the Voting Rights Act in 1970 were constitutional. The Court struck down the provisions that established 18 as the voting age in state and local elections. However, the Court upheld the provision establishing the voting age as 18 in federal elections. The Court was deeply divided in this case, and a majority of justices did not agree on a rationale for the holding.[14][15]

The decision resulted in states being able to maintain 21 as the voting age in state and local elections, but being required to establish separate voter rolls so that voters between 18 and 20 years old could vote in federal elections.[16]

Although the Twenty-sixth Amendment passed faster than any other constitutional amendment, about 17 states refused to pass measures to lower the voting age after Nixon signed the 1970 extension to the Voting Rights Act.[2] Opponents to extending the vote to youths questioned the maturity and responsibility of people at the age of 18. Professor William G. Carleton wondered why the vote was proposed for youth at a time when the period of adolescence had grown so substantially rather than in the past when people had more responsibility at an earlier age.[17] Carleton further criticized the move to lower the vote citing American preoccupations with youth in general, exaggerated reliance on higher education, and equating technological savvy with responsibility and intelligence.[18] He denounced the military service argument as well, calling it a "cliche".[19] Considering the ages of soldiers in the Civil War, he asserted that literacy and education were not the grounds from limiting voting; rather, common sense and the capacity to understand the political system grounded voting age restrictions.[20]

After the 1970 extension to the Voting Rights Act passed, opposition to lowering the voting age mostly dissolved.[citation needed] James J. Kilpatrick, a political columnist, asserted that the states were "extorted into ratifying the Twenty-sixth Amendment".[21] In his article, he claims that by passing the 1970 extension to the Voting Rights Act, Congress effectively forced the States to ratify the amendment lest they be forced to financially and bureaucratically cope with maintaining two voting registers. George Gallup also mentions the cost of registration in his article showing percentages favoring or opposing the amendment, and he draws particular attention to the lower rates of support among adults aged 30–49 and over 50 (57% and 52% respectively) as opposed to those aged 18–20 and 21-29 (84% and 73% respectively).[22] 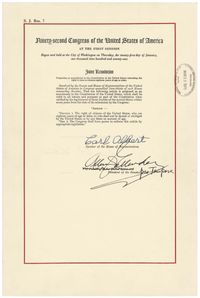 The Twenty-sixth Amendment in the National Archives

Ratification by the states

Having been passed by the 92nd Congress, the proposed Twenty-sixth Amendment was sent to the state legislatures for their consideration. Ratification was completed on July 1, 1971, after the amendment had been ratified by the following thirty-eight states:[25]

Having been ratified by three-fourths of the States (38), the Twenty-sixth Amendment became part of the Constitution. On July 5, 1971, the Administrator of General Services, Robert Kunzig, certiﬁed its adoption. President Nixon and Julianne Jones, Joseph W. Loyd, Jr., and Paul S. Larimer of the "Young Americans in Concert" also signed the certificate as witnesses. During the signing ceremony, held in the East Room of the White House, Nixon talked about his confidence in the youth of America.

As I meet with this group today, I sense that we can have confidence that America’s new voters, America’s young generation, will provide what America needs as we approach our 200th birthday, not just strength and not just wealth but the “Spirit of ‘76’ a spirit of moral courage, a spirit of high idealism in which we believe in the American dream, but in which we realize that the American dream can never be fulfilled until every American has an equal chance to fulfill it in his own life.[26]

The amendment was subsequently ratified by the following states, bringing the total number of ratifying states to forty-three:[25]

No action has been taken on the amendment by the states of Florida, Kentucky, Mississippi, Nevada, New Mexico, North Dakota, or Utah.