Two-Spirit (also two spirit or twospirit) is a modern umbrella term used by some indigenous North Americans to describe gender-variant individuals in their communities.[1] The term was adopted in 1990 at an Indigenous lesbian and gay international gathering to encourage the replacement of the anthropological term berdache.[2] It is a spiritual role that is recognized and confirmed by the Two-Spirit's indigenous community. While some have found the term a useful tool for intertribal organizing, not all Native cultures conceptualize gender this way, and most tribes use names in their own languages.[2][3] While pan-Indian terms are not always appropriate or welcome, the term has generally received more acceptance and use than the term it replaced.[2]

Third and fourth gender roles traditionally embodied by two-spirit people include performing work and wearing clothing associated with both men and women. Not all tribes/nations have rigid gender roles, but, among those that do, some consider there to be at least four genders: masculine man, feminine man, masculine woman, feminine woman.

Before the late twentieth-century, non-Native (i.e. non-Native American/Canadian) anthropologists used the generic term berdache /bərˈdæʃ/ to identify an indigenous individual fulfilling one of many mixed gender roles in their tribe, but that term has now fallen out of favor. Anthropologists primarily used it to identify feminine Native men. Its etymology, however, has meant that it is now considered outdated and potentially offensive: it derives from the French bardache (English equivalent: "bardash") meaning "passive homosexual", "catamite"[6] or even "male prostitute". Bardache, in turn, derived from the Persian برده barda meaning "captive", "prisoner of war", "slave".[7][8][9][10][11] Spanish explorers who encountered two-spirits among the Chumash people called them "joyas", the Spanish for "jewels".[12]

Use of berdache has generally been replaced by the self-chosen two-spirit, which, in 1990, gained widespread popularity during the third annual intertribal Native American/First Nations gay and lesbian conference in Winnipeg.[13] Two-spirit is a term chosen to express the Native/First Nations' distinct approach to gender identity and variance in contrast to the imposed non-Native in addition to replacing the otherwise imposed and non-Native terms of berdache and gay.[14][15][16]

"Two-spirited" or "two-spirit" usually indicates a Native person who feels their body simultaneously manifests both a masculine and a feminine spirit, or a different balance of masculine and feminine characteristics than usually seen in masculine men and feminine women.

Most Indigenous communities have specific terms in their own languages for the gender-variant members of their communities and the social and spiritual roles these individuals fulfill — including Lakota: ''wíŋkte and Navajo: nádleehé.[17]

Two-spirit individuals are viewed in some tribes as having two identities occupying one body. Their dress is usually a mixture of traditionally male and traditionally female articles, or they may dress as a man one day, and a woman on another. According to Dr. Sabine Lang, a German anthropologist, many tribes have distinct gender and social roles.[18] Some specific roles sometimes held by male assigned at birth two-spirits include: 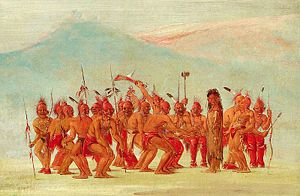 Detail from Dance to the Berdashe by George Catlin.

Some studies of two spirit identities among biological males explain them as a "form of social failure, women-men are seen as individuals who are not in a position to adapt themselves to the masculine role prescribed by their culture"[19] and that two-spirit people lost masculine power socially, so they took on female social roles to climb back up the social ladder within the tribe. However, Lang argues that the problem with the "failure" approach "probably lies, inter alia, in the fact that the women-men's ambivalence in both role and status is over-looked".[20] Lang disputes a supposed example of women being considered inferior to men in Lakota society from R. B. Hassrick's studies:

That Lakota men did not like to be called "heart of a woman" in council meetings (Hassrick 1989:133) is less likely to mean that women were regarded as inferior than that the warrior's role was sharply set off from the woman's role (see DeMallie 1983): a warrior clearly held the status of "man". Because the Lakota winkte (upon whom Hassrick's interpretations are based) were culturally defined as "non-men", the norms valid for the masculine role were therefore not applied to them.[20]

Lang later says "men made to wear women's clothes for the purposes of humiliation are everywhere ... distinguished from women-men".[21]

Cross dressing of two-spirit people was not always an indicator of gender identity. Lang believes "the mere fact that a male wears women's clothing does not say something about his role behavior, his gender status, or even his choice of partner..."[22]

Male-bodied two-spirit people, regardless of gender identification, can go to war and have access to male activities such as male-only sweat lodge ceremonies.[23] However, they may also take on "feminine" activities such as cooking and other domestic responsibilities.[24]

Two-spirits might have relationships with people of either sex.[25] According to Lang, female assigned at birth two-spirits usually have sexual relations or marriages with only females.[26]

Partners of two-spirits do not receive any special recognition, although some believed that after having sexual relations with a two-spirit they would obtain magical abilities, be given obscene nicknames by the two-spirited person which they believed held "good luck," or in the case of male partners, receive a boost to their masculinity. Examples of sexual relationships between two-spirited individuals are absent in the historical literature (with the sole exception of the Tewa tribe),[27] yet are a common occurrence in contemporary two-spirit communities. As male assigned at birth two-spirits often regarded each other as "sisters," Lang has speculated that it may have been seen as incestuous to have a relationship with another two-spirit.[28]

Although two-spirits have been both respected and feared in many tribes, the two-spirit is not beyond being reproached or even killed for bad deeds. In the Mojave tribe, for instance, two-spirits frequently become medicine persons and, like all who deal with the supernatural, are at risk of suspicion of witchcraft, notable in cases of failed harvest or of death. There have been instances of murder in these cases (such as the female assigned at birth two-spirit named Sahaykwisā).[30] Another instance in the late 1840s was of a Crow male assigned at birth two-spirit who was caught, possibly raiding horses, by the Lakota and was killed.[31]

According to some reports there had never been an alternative gender identity among the Comanche.[32] This is true of some Apache bands as well, except for the Lipan, Chiricahua, Mescalero, and southern Dilzhe'e.[33][34] One tribe in particular, the Eyak, has a single report from 1938 that they did not have an alternative gender and they held such individuals in low esteem, although whether this sentiment is the result of acculturation or not is unknown.[35][36]

Williams wrote that the Iroquois do not have a specific role for gender-variant individuals,[32] although there is a single report from Bacqueville de la Potherie in his book published in 1722, Histoire de l'Amérique septentrionale, that indicates that an alternative gender identity existed among them.[37] Many, if not all, tribes have been influenced by European homophobia/transphobia.[38][39][40][41][42][43]

Some sources have reported that the Aztecs and Incas had laws against such individuals,[44][45][46] though there are some authors who feel that this was exaggerated or the result of acculturation, because all of the documents indicating this are post-conquest and any that existed before had been destroyed by the Spanish.[42][47] The belief that these laws existed, at least for the Aztecs, comes from the Florentine Codex. According to Dr Nancy Fitch, Professor of History at California State University, Fullerton,

There is evidence that indigenous peoples authored many codices, but the Spaniards destroyed most of them in their attempt to eradicate ancient beliefs. ... The Florentine Codex is unquestionably a troubling primary source. Natives writing in Nahuatl under the supervision of the Spanish Fray Bernardino de Sahagún apparently produced the manuscript in the 1500s. The facts of its production raise serious questions about whether the manuscript represents the vision of the vanquished or of the colonizers ... colonization of the natives' minds loomed large in the Spanish project ... To make matters worse, while it appears that the original manuscript was completed in Nahuatl some time around 1555, no evidence of it remains. Authorities in New Spain confiscated his manuscripts in 1575, and at various times, the Spanish monarchy ordered him to stop his work. The earliest known version of the manuscript is, thus, Sahagún's summary of it written in Spanish. In 1585, he published a revised version of the codex, which, he argued, corrected some errors and integrated some things ignored in his earlier summary. Sahagún's revised version is the manuscript commonly known as the Florentine Codex.[48]

Don Pedro Fages was third in command of the 1769-70 Spanish Portolà expedition, first European land exploration of what is now the U.S. state of California. At least three diaries were kept during the expedition, but Fages wrote his account later, in 1775. Fages gave more descriptive details about the native Californians than any of the others, and he alone reported the presence of homosexuality in the native culture. The English translation reads:

I have submitted substantial evidence that those Indian men who, both here and farther inland, are observed in the dress, clothing and character of women - there being two or three such in each village - pass as sodomites by profession.... They are called joyas, and are held in great esteem.[49] 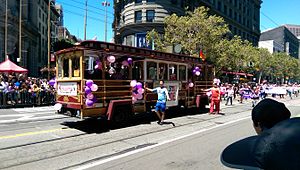 The 2009 documentary film[50] Two Spirits, directed by Lydia Nibley, tells the story of the hate-murder of 16-year-old Navajo Fred Martinez, nádleehí - a male assigned at birth person with a feminine nature.[51]

In 2012, a marker dedicated to two-spirit people was included in the Legacy Walk, an outdoor public display in Chicago, Illinois that celebrates LGBT history and people.[52]