A typographical omission of the word "not" in the sentence "Thou shalt not commit adultery." This printing of the Bible has become known as the Wicked Bible.

The "Judas" Bible in St Mary's Church, Totnes, Devon, UK. This is a copy of the second folio edition of the Authorized Version, printed by Robert Barker, Printer to King James I, in 1613, and given to the church for the use of the Mayor of Totnes. This edition is known as the "Judas" Bible because in Matthew c26 v36 "Judas" appears instead of "Jesus". In this copy the mistake (in red circle) is corrected with a slip of paper pasted over the misprint.[1]

A typographical error (often shortened to typo) is a mistake made in the typing process (such as a spelling mistake)[2] of printed material. Historically, this referred to mistakes in manual type-setting (typography). The term includes errors due to mechanical failure or slips of the hand or finger,[2] but excludes errors of ignorance, such as spelling errors. Before the arrival of printing, the "copyist's mistake" or "scribal error" was the equivalent for manuscripts. Most typos involve simple duplication, omission, transposition, or substitution of a small number of characters.

Fat finger, or "fat-finger syndrome", a slang term, refers to an unwanted secondary action when typing. When one's finger is bigger than the touch zone, there can be inaccuracy in the fine motor movements and accidents occur. This is common with touchscreens. One may hit two adjacent keys on the keyboard in a single keystroke. An example is buckled instead of bucked, due to the L key being next to the K key on many keyboards.[3]

Certain typos, or kinds of typos, have achieved widespread notoriety and are occasionally used deliberately for humorous purposes. For instance, the British newspaper The Guardian is sometimes referred to as The Grauniad due to its reputation for frequent typesetting errors in the era before computer typesetting.[4] This usage began as a running joke in the satirical magazine Private Eye.[5] The magazine continues to refer to The Guardian by this name to this day.

Typos are common on the internet in chatrooms, Usenet, and the World Wide Web, and some—such as "teh", "pwned", and "zomg"—have become in-jokes among Internet groups and subcultures. Pr0n is not a typo but an example of obfuscation.[6]

Typosquatting is a form of cybersquatting which relies on typographical errors made by users of the Internet.[7] Typically, the cybersquatter will register a plausible typo of a well-known website address in hopes of receiving traffic when Internet users mistype that address into a web browser. Deliberately introducing typos into a web page, or into its metadata, can also draw unwitting visitors when they enter these typos in Internet search engines.

Since the emergence and popularization of online auction sites such as eBay, misspelled auction searches have quickly become lucrative for people searching for deals.[8] The concept on which these searches are based is that, if an individual posts an auction and misspells its description and/or title, regular searches will not find this auction. However, a search which includes misspelled alterations of the original search term in such a way as to create misspellings, transpositions, omissions, double strikes, and wrong key errors would find most misspelled auctions. The resulting effect is that there are far fewer bids than there would be under normal circumstances allowing for the searcher to obtain the item for less. A series of third-party web sites have sprung up allowing people to find these items.[9] 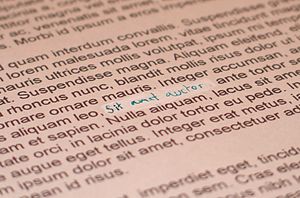 Correction fluid is used to correct typographical errors after the document is printed.

When using a typewriter without correction tape, typos are commonly overstruck with another character such as a slash. This saves the typist the trouble of retyping the entire page to eliminate the error, but as evidence of the typo remains, it is not aesthetically pleasing.

In computer forums, sometimes ^H (a visual representation of the ASCII backspace character) was used to "erase" intentional typos: Be nice to this fool^H^H^H^Hgentleman, he's visiting from corporate HQ.[10]

In instant messaging, users often send messages in haste and only afterwards notice the typo. It is common practice to correct the typo by sending a subsequent message where an asterisk precedes the correct word.[11]

In formal prose, it is sometimes necessary to accurately quote text containing typos. In such cases, the author will write "[sic]" to indicate that an error was in the original quoted source rather than in the transcription.[12]

Another kind of typo—informally called an "atomic typo"—is a typo that happens to result in a correctly spelled word that is different from the intended one, and since it is spelled correctly, the spellchecker cannot find the mistake. Examples include "unclear" instead of "nuclear", "sedan" instead of "Sudan", and "the" instead of "they". The term was coined in 2002 by The Palm Beach Post editor C. F. Hanif.[13]