U.S. Route 33 is a United States Numbered Highway that runs northwest–southeast for 709 miles (1,141 km) from northern Indiana to Richmond, Virginia, passing through Ohio and West Virginia en route. Although most odd-numbered U.S. routes are north–south, US 33 is labeled east–west throughout its route except in Indiana where it is labeled north–south.

As of 2008, the highway's northern terminus is at U.S. Highway 20 in southeastern Elkhart, Indiana. Its eastern terminus is in Richmond, Virginia. The route formerly extended northward through South Bend, Indiana, to St. Joseph on Lake Michigan in Michigan. In Virginia, "Route 33" continues east as State Route 33 to Stingray Point, on the Chesapeake Bay near Deltaville, Virginia.

Beginning with its terminus at US 20 on the southeast side of Elkhart, US 33 is a winding road that cuts diagonally from northwest to southeast through Northeast Indiana and serves as Main Street or a portion of Main Street in several cities and towns, including Elkhart, Dunlap, Goshen and Churubusco.

The road is the main overland link between the Fort Wayne metropolitan area and South Bend metropolitan statistical areas.

Southeast of Benton, U.S. 33 intersects State Road 13 before joining with US 6 to become an east–west rural highway running for a few miles between just north of Lake Wawasee near Syracuse to Ligonier at the intersection of State Road 5, where US 33 splits from US 6 and turns south, joining SR 5 as a north–south road for a few miles before splitting off to the southeast toward Kimmell as it enters Noble County.

US 33 continues southeast through Noble County until it reaches Wolf Lake, where it serves as the northern terminus of State Road 109 before continuing until its intersection with State Road 9 at Merriam just north of the Whitley County line. In Whitley County, the road curves eastward to bypass Blue Lake before intersecting with State Road 205 in Churubusco near the county line with Allen County as it heads toward Fort Wayne.

On the west side of Fort Wayne, US 33 joins US 30 near Interstate 69, then follows the interstate south, intersecting with SR 14 and US 24 before turning east to follow the Interstate 469 bypass around the southwest side of Fort Wayne. At the intersection with SR 1 south of the Fort Wayne International Airport, I-469/US 33 turns to the northeast until it intersects US 27 at the Fort Wayne suburb of Hessen Cassel, where US 33 splits off to the southeast to follow US 27 as a combined highway toward Decatur.

At Decatur, US 33/US 27 becomes a north–south road before it intersects with US 224 and continues as such until US 33 splits off from US 27 south of Decatur and heads east toward the Ohio state line, intersecting SR 101 at Pleasant Mills along the way.

U.S. Route 33 during its brief concurrency with U.S. Route 50 and State Route 32 in Athens, Ohio. 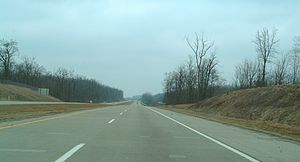 US 33 east of Bellefontaine, Ohio, passing through the Marmon Valley 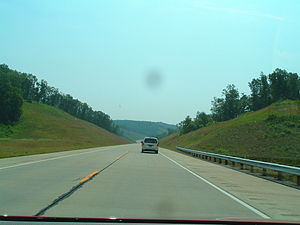 US 33 south of Athens, Ohio

US 33 enters Ohio from Indiana, to the west, near Willshire in Van Wert County as a two-lane route, continuing southeast through Mercer County, crossing US 127, then entering Auglaize County, joining limited-access SR 29 briefly near St. Marys, continuing east as a four-lane parkway, then a controlled-access highway near Wapakoneta, where it intersects I-75.

East of I-75, the road once again becomes two-lane as it continues to Lakeview and Russells Point south of Indian Lake. At the terminus of SR 117 near Huntsville, US 33 becomes a limited-access multi-lane highway before reaching US 68 at Bellefontaine where it resumes as a controlled-access freeway, passing Campbell Hill, the highest point in Ohio, and continuing around Marysville. Entering Franklin County, the road becomes multiplexed with State Route 161, then intersects I-270 in Dublin.

After I-270, the route loses its controlled-access status and passes though the Dublin Historic District and crosses the Scioto River. The multiplex with Route 161 then ends, and US 33 heads south on Riverside Drive towards downtown Columbus, following the Scioto River along the western border of Upper Arlington, where it passes Griggs Reservoir, one of the main sources of water for Columbus. The road changes names two times in this area, first to Dublin Road at the intersection with Trabue Road, and then to Spring/Long Streets at State Route 315. The route continues south on 3rd/4th Streets and then east on Livingston Avenue, heading towards the Columbus neighborhood of Driving Park.

In Bexley, US 33 veers southeast onto College Avenue, then intersects Interstate 70. After Petzinger Road, the route becomes a controlled-access highway, subsequently intersecting State Route 104, I-270 (for the second time), and State Route 317 (Hamilton Road). Following the Ebright Road near Blacklick Estates, the highway continues to the southeast as a non-limited-access expressway.

Beginning at Carroll, U.S. 33 bypasses Lancaster as a limited-access freeway completed in 2005.[2] Continuing southeast, the highway enters Ohio's scenic Hocking Hills region near Sugar Grove as an expressway. East of Logan, the highway again becomes limited-access for approximately 13 miles (21 km). As the route approaches Nelsonville, traffic continues on the limited access four-lane bypass that opened October 1, 2013.[3] Further southeast towards Athens, the expressway design resumes, followed by a brief limited-access section around Athens, where it joins the concurrent U.S. Route 50 and State Route 32 for about 3 miles (4.8 km). South of Athens, US 33 continues as a limited-access highway, bypassing Pomeroy, intersecting State Route 124 and State Route 7, and continuing to the Ohio River in Meigs County, crossing the Ohio on the two-lane cantilever Ravenswood Bridge, and entering West Virginia in Ravenswood. 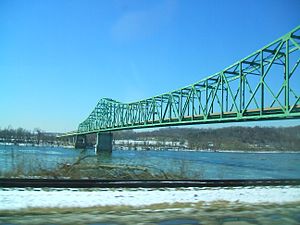 US 33 crossing the Ohio River on the Ravenswood Bridge, viewed from Ravenswood, with the Ohio bank of the river in the distance 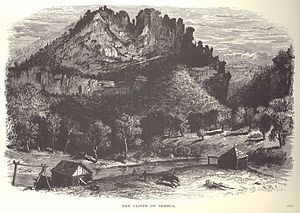 Seneca Rocks, along US 33 in Pendleton County, West Virginia (Wood engraving "The Cliffs of Seneca" by David H.Strother, published in 1872) 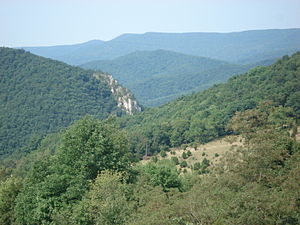 US 33 extends 248 miles (399 km) in West Virginia, from the Ohio River at Ravenswood to the Virginia state line atop Shenandoah Mountain west of Harrisonburg, Virginia.

Shortly after entering West Virginia and crossing the Ohio River, US 33 turns south, joining Interstate 77 to Ripley. The route then turns east from I-77, joining US 119 at Spencer, then passing through extremely rural areas of Roane, Calhoun, Gilmer, and Lewis counties.

US 33 Intersects Interstate 79 at Weston, West Virginia. From Interstate 79 east, US 33 is a four-lane highway, part of Corridor H of the Appalachian Development Highway System. The four-lane segment continues on through rural areas of Upshur, and Randolph counties, to just a couple miles past Elkins.

At Harding, US 250 joins US 33 for several miles after Elkins, where US 33 joins SR 55 and returns to a two-lane road, except for a seven-mile (11 km) section of four-lane across Kelly Mountain between Canfield and Bowden. Passing through the Monongahela National Forest, US 33 crosses the Eastern Continental Divide between Harman and Onego at about 3,240 feet (990 m) elevation, entering Pendleton County, then descends the Allegheny Front along Seneca Creek, skirting the north end of Spruce Mountain, at 4,861 feet (1,482 m) the highest point of the Allegheny Mountains.

US 33 then joins SR 28 at Seneca Rocks, West Virginia, and continues south in the Potomac River headwaters through scenic forest and farmland landscapes. Turning eastward from SR 28 at Judy Gap, US 33 crosses North Fork Mountain at about 3,600 feet (1,100 m), with a turnout on the western slope offering a scenic view of the Germany Valley below and the more distant Allegheny Front from Spruce Knob to Dolly Sods. US 220 joins US 33 for about half a mile in Franklin. After Franklin, US 33 continues eastward through rural areas, then climbs steeply to cross Shenandoah Mountain at Dry River Gap at about 3,450 feet (1,050 m) into Rockingham County, Virginia. 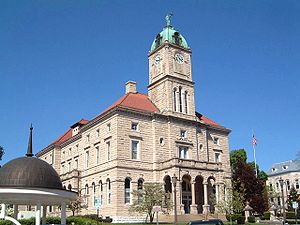 The Rockingham County Courthouse in Harrisonburg, Virginia, at the intersection of US 11 and US 33
Main article: U.S. Route 33 in Virginia
See also: Virginia State Route 33

From Richmond, "Route 33" continues east as Virginia State Route 33 across the Atlantic coastal plain through the Tidewater region of the Middle Peninsula to reach the Chesapeake Bay at Stingray Point just east of Deltaville.

US 33 formerly ended in St. Joseph, Michigan, at the junction of the old U.S. Highway 12, was extended to a junction with Interstate 196 near Lake Michigan Beach, Michigan, north of St. Joseph, but later truncated south of Niles, Michigan (junction U.S. Highway 12), then in April 1998 at Elkhart, Indiana.[4] Before its second truncation, it passed through Mishawaka and South Bend, Indiana.[5][6] Former segments of US 33 are now known as M-63, M-51, and State Road 933. Between South Bend and Fort Wayne, US 33 was part of the Lincoln Highway.

Various segments of US 33 have been improved to limited-access freeways. These include Ohio segments from St. Marys to Wapakoneta; Huntsville (near Bellefontaine) to Dublin (a northwestern suburb of Columbus); and bypasses around Lancaster, Nelsonville,[7][8] and Pomeroy.

In West Virginia, US 33 from Interstate 79 near Weston east nearly to Elkins is four-lane, built as part of Corridor H of the Appalachian Development Highway System. The route's steep grade up Shenandoah Mountain is easternmost West Virginia has been widened, with some sharp curves improved.

The State of Ohio plans to eventually make US 33 a controlled-access freeway from the Interstate 75 interchange near Wapakoneta to Athens, Ohio, except for the section inside I-270, the Columbus Beltway.[citation needed]

US 250 in Richmond. The highways travel concurrently through the city.

I‑295 northwest of Glen Allen

US 522 in Cuckoo. The highways travel concurrently to north-northwest of Cuckoo.

US 11 in Harrisonburg. The highways travel concurrently around the Rockingham County Courthouse.
West Virginia

US 220 in Franklin. The highways travel concurrrently to north of Franklin.

US 119 in Buckhannon. The highways travel concurrently to Spencer.

I‑79 southeast of Weston

US 19 in Weston. The highways travel concurrently through the city.

I‑77 in Ripley. The highways travel concurrently to Silverton.
Ohio

US 50 in Athens. The highways travel concurrently to east of Athens.

US 22 southwest of Lancaster

US 23 in Columbus. The highways travel concurrently through the city.

US 62 in Columbus. The highways travel concurrently through the city.

US 42 northeast of New California

US 36 in Marysville. The highways travel concurrently to west of Marysville.

US 127 southeast of Rockford
Indiana

US 27 in Decatur. The highways travel concurrently to south-southeast of Fort Wayne.

US 224 in Decatur. The highways travel concurrently through the city.

I‑69 east of Roanoke. The highways travel concurrently to Fort Wayne.

US 6 in Ligonier. The highways travel concurrently to northeast of Syracuse.