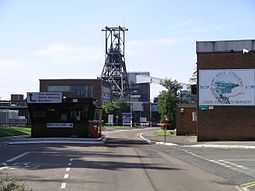 Kellingley Colliery lies in both North and West Yorkshire.

UK Coal Production Ltd, formerly UK Coal plc, was the largest coal mining business in the United Kingdom. The company is based in Harworth, in Nottinghamshire. The company is a former constituent of the FTSE 250 Index. The successor company that contains the former property division, Harworth Group is still listed on the London Stock Exchange.

On 12 December 2012 UK Coal plc completed [2] a complex financial restructuring of the company to secure its future and changed its name to Coalfield Resources plc.[3][4] The company's operations had been restructured into two separate businesses: the mining division (under UK Coal Mine Holdings Limited ("Mine Holdings")) and the property division (under Harworth Estates Property Group Limited ("Harworth Estates")).

Control of the mining division had passed to an Employee Benefit Trust ("EBT"), which initially held shares representing 67 percent of the voting and 10 percent of the economic rights in Mine Holdings for the benefit of current and future employees of the mining division. Coalfield Resources initially retained the remainder of Mine Holdings's economic and voting rights, but the shareholdings rank behind pension fund debt.[2] On 9 July 2013, following a devastating fire, their largest mine, Daw Mill, was forced into closure. As a direct, result both UK Coal Mine Holdings Ltd (UKCMHL) and UK Coal Operations Ltd (UKCOL) were put into administration.[5] The remaining mining operations were again restructured, resulting in the formation of a new business "UK Coal Production Ltd".[6]

The successor of Coalfield Resources, Harworth Group no longer has any equity interest in the mining business.[7] Harworth Group initially (in 2012) owned 24.9 percent of Harworth Estates, with 75.1 percent having passed to EBT in return for a £30 million cash injection and their financial support to the mines. However, in November 2014 Coalfield Resources announced that it had agreed terms with the Pension Protection Fund to buy back the 75.1% of Harworth Estates it did not already own and to change the name of the company to Harworth Group plc. This transaction completed on 24 March 2015.[7]

The predecessor company of UK Coal was founded by Richard J. Budge in 1974 as RJB Mining. In 1994, following the privatisation of the UK mining industry, it grew fivefold with the acquisition of British Coal's core activities.[8] It changed its name to UK Coal in 2001 after the retirement of its founder, having acquired UK Coal plc.

In 2012, UK Coal were fined £200,000 after pleading guilty to breaching health and safety laws after a death of a miner.[9] The miner died after equipment fell on him at the Kellingley Colliery. This marks the third death at the site in four years.

After the closure of the Kellingley Colliery in December 2015, only the former property division operates as the successor company Harworth Estates (wholly owned by the Harworth Group). The shafts of the Colliery will be emptied of cables and ropes and then filled with a concrete block about 10 metres deep. Demolition then starts on the surface buildings and the site will be levelled out before ownership is transferred to Harworth Estates for future redevelopment.[10]

At year end 2008, the company estimated coal reserves and resources of 105 MT at the mines, of which 45 MT is accessible under existing five year mining and investment plans. Production of the other 60 MT will require further investment and other costs.[14]

Contracts and prices in 2008

The company had commitments to deliver coal to customers. Its most important customers were electricity generators. These contracts had duration of up to many years. In these contracts volumes and prices of the coal were agreed. The prices agreed were a mix of:

Due to price increases in imported energy resources since 2005 the economic viability of British mined coal has increased. Therefore, in 2010 the Company has proposed a series of developments, mainly opencast mining, including the Minorca mine project development in Measham, Leicestershire.[16] Since UK Coal exited surface mining in late 2014,[12] it is unlikely that these plans materialize.

One deep mine, the Welbeck colliery, in Nottinghamshire closed in 2011 after continuous production since 1912.[17] Another deep mine, Daw Mill at Keresley, Coventry, closed in 2013 after an underground fire damaged much of the facilities.

On 10 April 2014, Reuters reported that the British government was to give UK Coal a £10 million loan to help fund the closure of its two remaining deep mines. The company will carry out a managed closure of the deep mines by Autumn 2015 and will seek a buyer for its surface mines. UK Coal's difficulties have been precipitated by a flood of U.S. coal on to the market, as a result of shale gas development, and by the strength of sterling.[18]

Thoresby Colliery was shut in July 2015, while Kellingley Colliery ceased production on 18 December 2015.[11]

The company moved into renewable energy, expanding into windfarms, which is helped by a large landbank and the desire to diversify into energy activities beyond coal. Wind power offers financial incentives such as Renewables Obligation Certificates. UK Coal, through its Harworth Power subsidiary, engaged in mine gas recovery, to generate electricity.[19]

Harworth Power was sold on 1 October 2012 to Red Rose Infrastructure Limited for £20.30 million.[20] At the time of the sale, it operated 14 gas engines of 26 MW generation capacity supplying electricity to UK Coal and the national grid.[20]

At the end of 2007 Harworth Estates land was estimated to be worth £411 million.[13] The estate assets are primarily in business parks, industrial sites and agriculture, with a smaller portfolio of residential property (residential assets associated with agricultural properties). Harworth Estates manage, develop and regenerate their extensive portfolio of land totalling over 30,000 acres (12,000 ha).[21]

Harworth Estates are now wholly owned by the Harworth Group, which has no equity interest in the mining operations anymore.

Three surface mines in North East England were owned by UK Coal Surface Mines Limited (company number 08492512) which went into administration on 14 November 2014. The business was then sold to UKCSMR Limited (company number 09275881). The three surface mines are Butterwell and Potland Burn in Northumberland and Park Wall North in County Durham.[22][23]