From Infogalactic: the planetary knowledge core
Jump to: navigation, search
For other ships with the same name, see USS Bancroft.

The second USS Bancroft (DD-256) was a Clemson-class destroyer in the United States Navy, and transferred to the Royal Canadian Navy, where she served as HMCS St. Francis during World War II.

Bancroft joined the Atlantic Fleet and took part in fleet training activities until 26 November 1919 when she went into reserve commission. She was placed out of commission at Philadelphia 11 July 1922.

Bancroft was recommissioned 18 December 1939 and served with the Atlantic Squadron on the east coast until decommissioned at Halifax, Nova Scotia, and transferred to Great Britain in the destroyer-land bases exchange 24 September 1940. 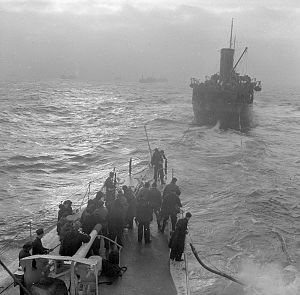 The destroyer HMCS St. Francis, which is escorting a convoy, prepares to take on fuel from a tanker at sea, 7 November 1942

Bancroft was allocated to the Royal Canadian Navy and was taken over by the Canadians 24 September 1940. Following the Canadian practice of naming destroyers after Canadian rivers (but with deference to the U.S. origin), St. Francis was named after the St. Francis River forming the border between northern Maine and Quebec and New Brunswick.[2] St. Francis left Halifax 15 January 1941 and arrived in the River Clyde, Scotland, 26 January. She joined the 4th Escort Group and on 20 May she rescued all the survivors of the steamship Starcrose which had to be sunk after being torpedoed by a submarine. At the end of June she escorted a troop convoy to the Middle East and in July she joined the newly formed Newfoundland Escort Force. Between 1941 and 1943 St. Francis made several attacks on enemy submarines while escorting convoys ON-95, SC-85, ON-105, HX-197, and ON-116 with Mid-Ocean Escort Force group C-4.[3] St. Francis subsequently escorted convoy ON-121 with Escort Group C-3, convoy SC-99 with Escort Group C-1, and convoy ON-147 with Escort Group C-4.[4]

After refitting at Halifax, St. Francis joined Escort Group C.2 in the Western Approaches Command in June 1943 but in August was transferred to the 9th Escort Group (RCN), working from Londonderry Port, Northern Ireland. She returned to the Western Local Escort Force at Halifax the following month. From early 1944 she was employed on training duties at Digby, Nova Scotia, where on 1 April 1945 she was declared surplus.

On her way to Baltimore to be scrapped by the Boston Iron & Metal Co. in July 1945, she sank as a result of a collision off Cape Cod, Massachusetts.[5]