From Infogalactic: the planetary knowledge core
Jump to: navigation, search
For other ships with the same name, see USS Mississippi.

USS Mississippi (Battleship No. 23), the lead ship of her class of battleships, was the second ship of the United States Navy named in honor of the U.S. state of Mississippi. After her career in the USN, she was sold to Greece and renamed Kilkis in 1914. Kilkis was sunk by German bombers in April 1941.

Her keel was laid down on 12 May 1904 by William Cramp & Sons of Philadelphia. She was launched on 30 September 1905 sponsored by Miss Mabel Clare Money, daughter of United States Senator Hernando D. Money of Mississippi, and commissioned at Philadelphia Navy Yard on 1 February 1908, Captain J.C. Fremont in command.

Mississippi and her sister Idaho were designed in response to Congressional desire to cap the growth and expense of new battleships, whose size and cost had increased dramatically since the first US battleships, the Indianas of 1893, had been authorized. Displacement was limited to 13,000 tons (13,200 metric tons), a reduction of 3,000 tons (3,000 metric tons) from the prior Connecticut class.[2]

In terms of design, the two ships were essentially a reduced version of the Connecticuts which had preceded them, and by comparison with which they sacrificed 1 kn (1.2 mph; 1.9 km/h) of speed, four 7 in (180 mm) guns, eight 3 in (76 mm) guns, two torpedo tubes and some freeboard.[3] They were indifferent sea boats and were obsolete upon commissioning in consequence of the advent of HMS Dreadnought.

Though intended to recapitulate in steel and steam the concept of the 74-gun third-rate, which had formed the backbone of the sailing battle fleets of the previous century, the tactical and technical calculus of early 20th century naval warfare had made the third-rate concept obsolete; to be viable, a battle line needed to consist entirely of what could be considered first-rate units.[4]

This combination of Congressional displacement restrictions and a flawed tactical premise produced a class that was never satisfactory in US service. They were close to being second-class units at a time and in a navy which could neither afford to tie up tonnage and money in second-tier designs nor place such vessels in its battle line. 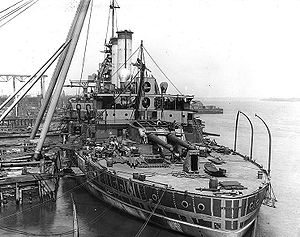 USS Mississippi under construction at the Cramp shipyard, Philadelphia, in 1907

The second Mississippi (Battleship No. 23) was laid down on 12 May 1904 at Philadelphia by the William Cramp and Sons Ship and Engine Building Co. She was launched on 30 September 1905, and commissioned at the Philadelphia Navy Yard, League Island, on 1 February 1908, with Capt. John C. Fremont in command. The ship was sponsored by Miss Mabel Clare Money, daughter of Senator Hernando DeSoto Money of Mississippi.[5] Mississippi departed Philadelphia in February 1908 for Hampton Roads, and then sailed for Guantanamo Bay, Cuba. Following her shakedown off the coast of Cuba in 1908, she returned to Philadelphia for final fitting out. In early 1909 she attended the inauguration of the President of Cuba, met the Great White Fleet upon its return, and was reviewed by the President. For the remainder of the year and into 1910 she traveled the waters off New England, the Caribbean, and the Gulf of Mexico, took a voyage up the Mississippi River, and participated in war games out of Guantanamo Bay.[5]

File:Mississippi - Airplanes.jpg
USS Mississippi off Vera Cruz, Mexico in 1914 with aircraft on board.

In late 1910 she sailed to Gravesend Bay, England and to Brest, France, as part of Atlantic Fleet maneuvers, returning to Guantanamo Bay in early 1911. She then spent about 14 months off the Atlantic coast, based alternately out of Philadelphia and Norfolk, serving as a training ship and conducting operational exercises. In June 1912 she landed a Marine detachment at El Cuero, Cuba, to protect American interests and remained on station in Guantanamo Bay until July, when she sailed for home. Following exercises with Battleship Division 4 (BatDiv 4) off New England, she returned to Philadelphia Navy Yard, where she was put in the First Reserve in August 1912.[5]

Mississippi remained in the Atlantic Reserve Fleet at Philadelphia until detached in December 1913 for duty as an aeronautic station ship at Pensacola, Florida. At Pensacola, she stood by while her crew, along with the early naval aviators, rebuilt the old naval base, laying the foundation for the Pensacola Naval Air Station.[5][6] With the outbreak of fighting in Mexico in April 1914, Mississippi sailed to Veracruz, arriving with the first detachment of naval aviators to go into combat.[6] Serving as a floating base for the fledgling seaplanes and their pilots, the warship launched nine reconnaissance flights over the area during a period of 18 days. One month later, the battleship departed Veracruz for Pensacola.[5] In June 1914 she returned to Hampton Roads where in July she was decommissioned and transferred to the Greek Navy.[5] The US received $12 million for her and USS Idaho.[7]

For more details on this topic, see Greek battleship Kilkis.

Mississippi decommissioned at Newport News on 21 July 1914, and was turned over to the Royal Hellenic Navy the same day. She remained in Greek service for 27 years, before being sunk during World War II.

Although the Mississippi-class ships were decommissioned before the fleet designation reworkings in 1920, and thus never carried the "BB" hull classification symbol in service, many lists of American battleships (including the one in this encyclopedia) list them as "BB-23" and "BB-24" for completeness.