USS Stark was deployed to the Middle East Force in 1984 and 1987. Captain Glenn R. Brindel was the commanding officer during the 1987 deployment. The ship was struck on 17 May 1987, by two Exocet anti-ship missiles fired from an Iraqi Mirage F1[3][4] aircraft during the Iran–Iraq War. The plane had taken off from Shaibah at 8 pm and had flown south into the Persian Gulf. The pilot fired the first Exocet missile from a range of 22.5 nautical miles (41.7 km), and the second from 15.5 nautical miles (28.7 km), just about the time Stark issued a standard warning by radio.[5] The frigate did not detect the missiles with radar; warning was given by the lookout only moments before the missiles struck.[3]The first penetrated the port-side hull and failed to detonate, but left flaming rocket fuel in its path. The second entered at almost the same point, and, leaving a 3-by-4-meter gash, exploded in crew quarters. 37 sailors were killed and 21 were injured.[3] 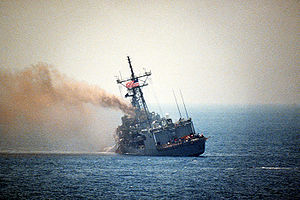 On fire and listing, the frigate was brought under control by its crew during the night. The ship made its way to Bahrain where, after temporary repairs by the tender USS Acadia to make her seaworthy,[6] she returned to her home port of Mayport, Florida, under her own power. The ship was eventually repaired at Ingalls Shipbuilding in Mississippi for $142 million.

It is unknown whether Iraqi leaders authorized the attack. Initial claims by the Iraqi government (that Stark was inside the Iran–Iraq War zone) were shown to be false. The motives and orders of the pilot remain unanswered. American officials have claimed he was executed, but an ex-Iraqi Air Force commander later said that the pilot who attacked Stark was not punished, and remained alive.[7]

Citing lapses in training requirements and lax procedures, the U.S. Navy's board of inquiry relieved Captain Brindel of command and recommended him for court-martial, along with Tactical Action Officer Lieutenant Basil E. Moncrief. Instead, Brindel and Moncrief received non-judicial punishment from Admiral Frank B. Kelso II and letters of reprimand. Both opted for early retirement, while Executive Officer Lieutenant Commander Raymond Gajan Jr. was detached for cause and received a letter of admonition.[8]

Stark was part of the Standing Naval Forces Atlantic Fleet in 1990 before returning to the Middle East Force in 1991. She was attached to UNITAS in 1993 and took part in Operation Support Democracy and Operation Able Vigil in 1994. In 1995, she returned to the Middle East Force before serving with the Standing Naval Forces, Atlantic (STANAVFORLANT) in 1997 and in 1998.

Stark was decommissioned on 7 May 1999. A scrapping contract was awarded to Metro Machine Corp. of Philadelphia, Pennsylvania, on 7 October 2005. The ship was reported scrapped on 21 June 2006.[9]

This article includes information collected from the Naval Vessel Register, which, as a U.S. government publication, is in the public domain. The entry can be found here.