The protagonists are the X-Men, a group of mutants whose unusual genetics grant them superpowers which set them apart from the rest of humanity. They are led by Professor Charles Xavier, the world's most powerful telepath. The series features many characters and storylines similar to those of the original X-Men series. Ultimate X-Men almost completely ignores supernatural or mystical elements as plot devices, and the X-Men have no secret identities, and mutants are mistrusted and hunted down. The series began in 2001 under writer Mark Millar and artists Adam Kubert and Andy Kubert, whilst the final issues of the series were written by Aron Coleite and penciled by Mark Brooks.

A quasi-sequel/spinoff titled Ultimate Comics: X began in February 2010, but only lasted for 5 issues. The series focused on Wolverine's secret son Jimmy Hudson, Jean Grey, and several other mutants dealing with the aftermath of Ultimatum.

Ultimate X-Men was then relaunched by Nick Spencer and Paco Medina, with the title now called Ultimate Comics: X-Men.

Upon its debut in February 2001, Ultimate X-Men was the second comic of the Ultimate Marvel line, preceded a few months by its sister title Ultimate Spider-Man. The heads of the Ultimate Universe line, Bill Jemas and Joe Quesada, originally tried to hire Brian Michael Bendis to write the title, but he declined.[dead link][2] Marvel hired Scottish writer Mark Millar, who was best known at the time for his run on The Authority and was largely ignorant of the X-Men franchise. With the first X-Men film as his only reference, Millar reinvented the X-Men.[3] As a result, Millar's original X-Men consisted of telepath Professor X, Cyclops, whose eyes shoot concussive beams, telepathic and telekinetic Jean Grey, weather-manipulating Storm, simian genius Beast, metal-skinned Colossus, and cryokinetic Iceman.

Common to the Millar period was an edgy tone, featuring quick action-driven plots and less moral X-Men. For instance, Wolverine tries to kill Cyclops in "Return of the King" because he is envious of Jean's love. In an interview with Sequential Tart, Millar commented, "You're not competing with Cartoon Network on these books; you're competing with 'Buffy'...Superhero comics aren't adult, but they shouldn't be written for five-year-olds either."[3] Millar shaped Ultimate X-Men into a commercial hit, consistently outselling its sister titles, X-Treme X-Men and Uncanny X-Men and staying just behind Grant Morrison's experimental and popular New X-Men run.[4]

After Mark Millar's run, Ultimate Spider-Man writer Brian Michael Bendis took over for a year. Bendis stated that his run on the book would be more character-driven, especially concerning Wolverine, who had previously tried to kill his teammate Cyclops.[2] Bendis' run was marked by the relative absence of major villains and was also notorious for killing Beast, who was killed when a Sentinel attacked the White House during Emma Frost's public disclosure of her school. This made Beast the first dead Ultimate X-Man. As a side note, Ultimate X-Men #40 features what Marvel claims to be the first marriage proposal[citation needed] in a comic book letters column, which is answered in Ultimate X-Men #44 with a positive response.

The third Ultimate X-Men writer was Brian K. Vaughan, best known at the time for his work on Y: The Last Man. His run was marked by the relative absence of Wolverine as the main character and the re-imagining of second-string X-Men characters. He introduced Mr. Sinister as a mutant-killing scientist with hypnosis and stealth powers in "The Tempest" (#46-49), German twins Fenris as mutant corporate criminals in "Cry Wolf" (#50-53), as well as Mojo and Longshot as a corrupt TV producer and a mutant felon, respectively in "The Most Dangerous Game" (#54-57). Both are of non-alien origin in this world and have the civilian names "Mojo Adams" and "Arthur Centino", a play on the names of their creators, writer Ann Nocenti and artist Art Adams. Further arcs were centered on Professor X (#58) and Deathstrike in "Shock and Awe" (#59-60). Lady Deathstrike possesses adamantium claws and regenerative powers. Vaughan also reintroduced Emma Frost's mutant team and Magneto in "Magnetic North" (#61-65), and established Ultimate Colossus to be homosexual. [Vol. 13 - Magnetic north (#65)]

Vaughn's run was followed by Robert Kirkman, author of The Walking Dead and Invincible comic books. Kirkman's run was noted for adapting several major storyarcs from the regular X-Men series. These included Jean Grey's transformation into Phoenix, the arrival of Cable and Bishop, and the appearance of Apocalypse. Kirkman reintroduced Wolverine as an important character, and played with issues of team loyalty. Under his authorship, major characters such as Nightcrawler and Colossus left the team. His tenure also featured Cyclops' decision to turn Xavier's into a more traditional school and consequently disband the X-Men. When this was done an alternate team of X-Men was formed by Bishop as part of the upcoming fight against Apocalypse. After the Ultimatum storyline, nearly all of the X-Men were killed, and the team disbanded.

After the events in Ultimatum the book, along with Ultimate Fantastic Four, was canceled after its 100th issue.[5] A follow-up one-shot, called Requiem, was released and concluded the series' story. A new series, Ultimate Comics: X, debuted in early 2010 and featured Kitty Pryde, Wolverine's son, Jimmy Hudson and Jean Grey.

Ultimate X-Men quickly established itself as a hit comic, lauded by critics and popular with the fans. The following table shows the development of comic sales in comparison to the mainstream titles.[8] 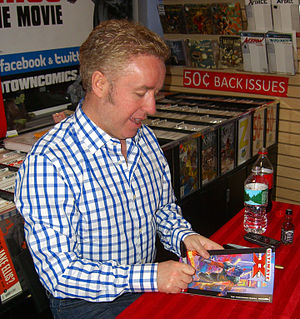 Writer Mark Millar signing a copy of the first issue during an appearance at Midtown Comics in Manhattan.

Ultimate X-Men introduced revised versions of classic X-Men villains, such as mutant supremacist, would-be world conqueror, and evil genius mastermind Magneto. He heads the anti-human, genetic terrorist group Brotherhood of Mutants. The series also features the amoral, Mengele-like mutant super-weapon project Weapon X, the shady Hellfire Club and many more. In addition, the Academy of Tomorrow is the Ultimate Marvel version of a spin-off X-Men team called the New Mutants. In this world the group consists of: headmistress Emma Frost, who can turn her skin into organic diamond; Cyclops' older brother Havok (Alex Summers), who shoots concussive blasts from his hands; airborne Sam Guthrie, or Cannonball; non-mutant genius Doug Ramsey, also known as Cypher; Canadian speedster Jean-Paul Beaubier, or Northstar; Havok's girlfriend, Lorna Dane, the magnekinetic Polaris; Roberto da Costa, the Brazilian solar-powered Sunspot; and recently Angel. In addition, the Shi'ar are a religious movement, led by "Majestrix Lilandra". They worship the "Phoenix God", which they think is reincarnated in the X-Man Marvel Girl (Jean Grey). The Ultimate version of Cable is revealed to be a future version of Wolverine, who kidnaps Charles Xavier in an attempt to prevent the coming of Apocalypse.

"Syndicate" is the name of two mutants, psi-resistant conjoined twins named Luke and Matthew. They try to rob a bank to help their terminally ill sister, but are stopped by Professor X. Realizing their plight, he gives them a chance to redeem themselves by working as his private agents. Created by Brian K. Vaughan and Steve Dillon, they first appeared in Ultimate X-Men #58. The characters have an unusual heart which pumps out electromagnetic pulses with each beat; this disables almost any electrical system. Their interlinked brain matter also makes them immune to telepathic control, although they are still susceptible to mind readings.

In the shared universe of Ultimate Marvel, the X-Men have more than once crossed the paths of other superheroes: Peter Parker is a good friend of the X-Men and is Shadowcat's ex-boyfriend. The X-Men share a wary truce with Nick Fury and The Ultimates, who have been both their best benefactors ("New Mutants" arc) and worst enemies (Ultimate War) in the past. The Ultimate Fantastic Four have met the X-Men in Ultimate X4 and the teams are generally on positive terms.

Ultimate X-Men has been collected in the following trade paperbacks:

Ultimate X-Men also has been collected in the following hardcovers: