Unalaska (Aleut: Iluulux̂[3]) is a city in the Aleutians West Census Area, a regional component of the Unorganized Borough in the U.S. state of Alaska. Unalaska is located on Unalaska Island and neighboring Amaknak Island in the Aleutian Islands off mainland Alaska. The population was 4,376 at the 2010 census, which is 79% of the entire Aleutians West Census Area. Unalaska is the second-largest city in the Unorganized Borough, behind Bethel.

The Aleut or Unangan people have lived on Unalaska Island for thousands of years.[4] The Unangan, who were the first to inhabit the island of Unalaska, named it "Ounalashka", meaning "near the peninsula". The regional native corporation has adopted this moniker, and is known as the Ounalashka Corporation.[5] The Russian fur trade reached Unalaska when Stepan Glotov and his crew arrived on August 1, 1759. Natives, Russians and their descendants comprised most of the community's population until the middle 20th century, when the involvement of the United States in World War II led to a large-scale influx of people and construction of buildings all along the strategically-located Aleutians.

Almost all of the community's port facilities are on Amaknak Island, better known as Dutch Harbor or just "Dutch". It is the largest fisheries port in the U.S. by volume caught. It includes Dutch Harbor Naval Operating Base and Fort Mears, U.S. Army, a U.S. National Historic Landmark. Dutch Harbor lies within the city limits of Unalaska and is connected to Unalaska by a bridge. Amaknak Island is home to almost 59 percent of the city's population, although it has less than 3 percent of its land area. 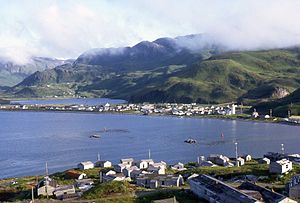 Unalaska view in 1972 with the collapsed buildings of the closed Naval Base in the foreground. 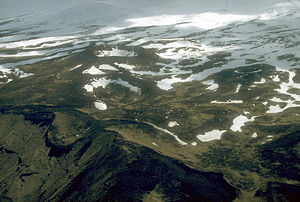 Aerial view of the Point Kadin vents, a series of post-glacial explosion pits and small cinder cones that occur along a fracture zone northwest of the summit of Makushin Volcano.

The island of Unalaska was first inhabited by the Aleut people, who named it "Ounalashka", meaning: "Near the Peninsula". They developed an intricate and complex society long before their first contact with the Russian fur traders who would document their existence.

Unalaska and Amaknak Islands contained 24 settlements with more than 1,000 Aleut inhabitants in 1759, when the first Russian group under Stepan Glotov came and started trading for three years on Umnak and Unalaska. Between 1763 and 1766, a conflict between the Russian fur traders and the Unalaska Natives occurred; the Aleuts destroyed four Russian ships and killed 175 hunters/traders. Solov'ev then returned to Unalaska and directed the massacre of many Natives. In the 1760s, Unalaska was temporarily used as a Russian fur trading post.[6] The post was permanently established in 1774,[7] and was eventually incorporated into the Russian-American Company. It was there that Captain James Cook encountered the navigator Gerasim Izmailov in 1778.

In 1788 the Spanish made contact with the Russians in Alaska for the first time. An expedition by Esteban José Martínez and Gonzalo López de Haro visited several Russian settlements. Their westernmost visit was to Unalaska. On August 5, 1788, they claimed Unalaska for Spain, calling it Puerto de Dona Marie Luisa Teresa.

In 1825, the Russian Orthodox Church of the Holy Ascension was built in Unalaska. The founding priest, Ivan Veniaminov, later canonized as Saint Innocent of Alaska, composed the first Aleut writing system with local assistance, and translated scripture into Aleut. Between 1836 and 1840, measles, chicken-pox and whooping-cough epidemics drastically reduced the population; thus, at the end of the decade, only 200 to 400 Aleuts lived in Unalaska.

In 1880, the Methodist Church opened a school and a clinic for orphans in Unalaska. Between 1899 and 1905, the Gold Rush brought many ships through Dutch Harbor where the North American Commercial Company had a coaling station.

During the first half of the century, the island was touched by numerous epidemics, first in 1900, and then in 1919 the Spanish flu touched the island: these contributed to a dramatic decrease of the population in Unalaska.

The United States started fortifying Dutch Harbor in 1940, resulting in the construction of the Dutch Harbor Naval Operating Base and Fort Mears. On June 3, 1942, the town was attacked by Japanese forces in the Battle of Dutch Harbor, part of the Aleutian Islands campaign. After the attack and the Japanese occupation of Attu, almost all of the native residents of the island were arrested. Many were held, under poor conditions, in camps in Southeast Alaska for the duration of the war; a substantial number of the internees died during the imprisonment.[9]

Beginning in the 1950s, Unalaska became a center of the Alaskan king crab fishing industry; by 1978 it was the largest fishing port in the United States. A 1982 crash in king crab harvests decimated the industry, and the mid-1980s saw a transition to bottom fishing.[10] Since 2005, the Discovery Channel's documentary show Deadliest Catch has focused on fishermen who are based in Dutch Harbor.

Satellite shot of the islands of Umnak (left) and Unalaska (right).

Makushin Volcano (5,691 ft/1,735 m) is located on the island; it is not quite visible from within the town of Unalaska, though the steam rising from its cone is visible on the rare clear day. By climbing one of the smaller hills in the area, such as Pyramid Peak or Mount Newhall, it is possible to get a good look at the snow-covered cone.

A major find was announced in 2015 after scientists examined a group of giant, tusked, quadruped, marine mammal fossils. The species had been unearthed during excavation for the construction of a school. They are unique, shore dwellers belonging to the extinct order Desmostylia, and possibly related to Proboscidea or Sirenia.[11] A rendition of a group was drawn by Alaskan artist Ray Troll.[12]

As in all of the Aleutian islands, the climate of Unalaska is a subpolar oceanic climate (Cfc) with moderate and fairly uniform temperatures and heavy rainfall. Fog is often present even when it is not raining. Summer weather is around 5 °F (2.8 °C) cooler than Southeast Alaska (Sitka), but the winter temperatures are nearly the same.

There were 927 households out of which 34.1% had children under the age of 18 living with them, 43.1% were married couples living together, 7.7% had a female householder with no husband present, and 42.5% were non-families. 35.3% of all households had individuals under 18 and 5.0% had someone living who was 65 years of age or older. The average household size was 2.46 and the average family size was 3.17. 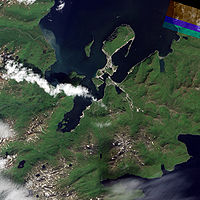 The port of Unalaska / Dutch Harbor is the main port and field base for the storied Bering Sea king crab fishery. The Dutch Harbor crabbing fleet is featured in the television show Deadliest Catch, a documentary style show on the Discovery Channel, and Dutch Harbor's facilities and local pub are featured prominently in numerous episodes.

Dutch Harbor has also been the largest fisheries port in the United States, in terms of volume of seafood caught, for nearly every year since 1981.[16][17] Until 2000, it also ranked first in terms of the dollar value of its catch; since 2000, however, the port of New Bedford, Massachusetts, has outranked Dutch Harbor in that category.[18]

A pilot project in Unalaska / Dutch Harbor, Alaska, is producing fish oil biodiesel from the local fish processing industry in conjunction with the University of Alaska Fairbanks. It is rarely economical to ship the fish oil elsewhere and Alaskan communities are heavily dependent on diesel power generation. The local factories process 3.5 million tons of fish oil annually.[citation needed]

Unalaska has a council–manager form of government. The mayor is elected at large, and serves a three-year term; his or her powers are mostly ceremonial.

The city council is the legislative body of the city; it is made up of six members, who are elected at large by a direct vote of the city's electorate. They also serve three-year terms. The city council has for its mission to "enact the laws of the city, set the mill rate for property taxes within the city, approve the annual budget for the city, and appropriate funds to provide for city services".[19]

The incumbent mayor is Shirley Marquardt. Marquardt was elected without opposition to a fourth term in office in 2013, the first time in over two decades that a mayoral election went uncontested.[20] The city's longest-serving mayor was Frank Kelty, who was elected to five consecutive terms.

Unalaska is located in the Aleutians No. 2 voting precinct, in the 37th election district and Senate district S. The city is represented in the Alaska House of Representatives by Bob Herron and in the Alaska Senate by Lyman Hoffman, both Democrats from Bethel.

Unalaska was home to Carl Moses, who moved there from King Cove in the mid 1960s and was a business and political leader in the community for decades until shortly before his death in 2014. Moses was the longest-serving member in the history of the Alaska House, serving a total of 22 years, from 1965 to 1973 and from 1993 to 2007. He also served under three different political parties, first as a Republican, later switching to Democrat, and also served the majority of one term as a member of the Alaskan Independence Party. The only other Unalaska resident to serve in the legislature was Eric G. Sutcliffe, at the time owner of Stormy's Restaurant. Sutcliffe served a single term in the House, from 1981 to 1983.

As Unalaska is designated a first-class city and located within the Unorganized Borough, it is required under state law to operate its own schools rather than participate in a Rural Education Attendance Area. The Unalaska City School District reported an enrollment of 409 students for the 2013–2014 school year, split roughly evenly between Eagle's View Elementary School (pre-elementary through 6th grade) and Unalaska Jr/Sr High School (7th through 12th grades).

UCSD was voted one of the best 100 school districts in the United States by Offspring Magazine, a Forbes publication. It has also consistently been one of the highest scoring schools in Alaska in both the Standards-based exams and Alaska Exit Exam. In 2006, the Alaska Association of School Boards awarded the school district with the Outstanding School Board Award and Superintendent of the Year award.

11% of Unalaska residents age 25 and older have a bachelor's or advanced college degree.[22]

The state of Alaska owns a 4,100 by 100 ft (1,250 by 30 m) paved runway,[23] where daily flights are scheduled. Because of the very harsh weather conditions around Unalaska Airport, about a fifth of those flights are cancelled. A seaplane base is also available. The state of Alaska changed the name of the airport in 2002 to "Tom Madsen Airport", after a bush pilot killed in an accident that year, although the FAA still uses the airport's original name.

The State Ferry operates once every two weeks from Kodiak between April and October. Out of the ten major docks in Unalaska, three are operated by the city. A World War II sub dock was refurbished and now offers ship repair services.[24]

There are approximately seven miles of paved road, and 38 miles (61 km) of road total in Unalaska.[21] According to traffic counts taken by the Alaska Department of Transportation and Public Facilities, the most heavily traveled roads in Unalaska are Airport Beach Road between 5th Street and East Point Road, 5th Street between Broadway Avenue and Airport Beach Road, and Broadway Avenue between 5th Street and Steward Road. These roads recorded an annual average daily traffic volume of approximately 3,000 cars.[25]

Unalaska has been twinned with Petropavlovsk-Kamchatsky, Russia since 1990.[28]