Uniforms and insignia of the Sturmabteilung 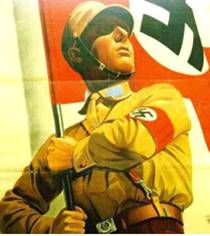 The brown shirted stormtroopers of the Sturmabteilung gradually come into being within the Nazi Party beginning in 1920. By this time, Adolf Hitler had assumed the title of Führer of the Nazi Party, replacing Anton Drexler who had been known as the more democratically elected Party Chairman. Hitler began to fashion the Nazi Party on fascist paramilitary lines and, to that end, the early Nazis of the 1920s would typically wear some sort of paramilitary uniform at party meetings and rallies. The most common of these were World War I uniforms with full medals. Also common were uniforms of the Freikorps as well as uniforms of veteran groups such as the Stahlhelm. Nazi Party members would also mix components from all three types of uniforms with little to no standardization except a swastika armband worn on the left arm.

By 1921, the Nazi Party had taken its "Sports Detachment", consisting mostly of burly bodyguards Hitler used for his own protection, and had formed the Nazi stormtroopers, or the "Storm Detachment", which was shortened to be known as the SA. It was at this point that the very first SA titles came into being, although there were no established uniforms or insignia except a swastika armband worn on a paramilitary uniform. At the start of the group's existence, the SA had four primary titles:

In 1923, the SA was disbanded after the failed Munich Beer Hall Putsch. The group was refounded two years later in 1925. 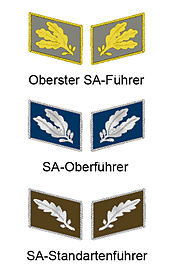 From 1923 to 1925, the SA did not officially exist since Adolf Hitler had been imprisoned for his actions in the Munich Putsch and the Nazi Party banned in Germany. Underground cells of SA men did continue to meet in secret, including one run by an SA leader named Gerhard Roßbach. It was Roßbach who effectively invented the "Nazi brownshirt" uniform since, in 1924, Roßbach located a large store of war-surplus brown denim shirts in Austria originally intended for tropical uniforms.[1]

In 1925, the SA was re-founded as part of the new Nazi Party which Hitler had put together following his release from prison. The reborn SA then received its first formal uniform regulations and also began using the first recognizable system of rank insignia.

Along with a brown shirt uniform, SA members would wear swastika armbands with a kepi cap. Originally, the SA used its pre-1923 rank titles, but this changed in 1926 when local SA units began to be grouped into larger regiment sized formations known as Standarten. Each SA regiment was commanded by a senior SA officer called a Standartenführer. At the same time, to differentiate from the SA rank and file, senior SA officers began to wear oak leaves on their collars to signify their authority. Under this system, a Standartenführer wore one oak leaf, an Oberführer two, and the Supreme SA Commander wore three. The lower ranks of SA-Führer and SA-Mann still wore no insignia.

In 1927, the officer rank of SA-Führer became known by the title of "Sturmführer" and a higher officer rank known as "Sturmbannführer" was created to be held by battalion formation commanders directly subordinate to the Standartenführer. In 1928, an expansion of SA enlisted ranks was required in response to the growing rank and file membership of the SA troopers. These new titles and ranks were denoted by an insignia system which consisted of silver pips pinned to a wearer's collar. The pip system was adopted from the Stahlhelm veteran's group which was closely connected to the SA both in dual membership and ideological design.

A further change in 1928 was the creation of the rank of Gruppenführer. This rank used the three leaf collar insignia previously reserved for the Supreme SA Commander and the rank was held by the senior most SA commanders in Germany who led division sized formations of several SA-Standarten. By this time, the SA had also begun to use unit insignia for its junior members which consisted of a numbered collar patch, showing both battalion and regiment affiliation, worn opposite the badge of rank. This unit insignia patch was worn by those holding the rank of Sturmbannführer and below; the higher officer ranks wore oak leaf insignia on both collars.

By the close of the 1920s, the SA rank system had solidified into the following titles: 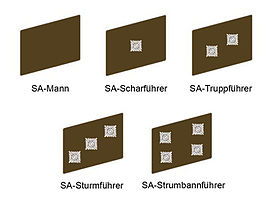 The original pip system used by the SA in the 1920s. 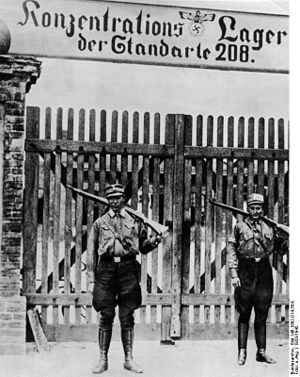 The next major change in SA uniforms and insignia occurred in 1930 when Ernst Röhm was appointed as Chief of Staff of the SA. Röhm's appointment was as the result of Adolf Hitler personally assuming command of the SA as the Oberster SA-Führer. Hitler would hold this title until the fall of Nazi Germany in 1945 and, after 1930, it was the SA Chief of Staff who was the effective leader of the organization.

Röhm undertook several changes to the SA uniform and insignia design, the first being to invent several new ranks in order for the SA rank system to mirror that of the professional military. The rank expansion took place gradually between 1930 and 1932, with the final addition being the creation of a rank of SA-Obergruppenführer which Röhm appointed to himself as well as senior SA-generals of the SA command staff. The new ranks used the same collar pip and oak leaf system as before, but with the addition of corded shoulder boards worn on the right shoulder for the officers. Further, the officers wore right shoulder cord of either gold or silver. In contrast, the enlisted men wore piping cords shaped as shoulder straps on the right shoulder.[2]

Ernst Röhm's special insignia as SA Chief of Staff, used between 1933 and 1934. The insignia was abolished after the Night of the Long Knives.

In 1933, when Adolf Hitler became Chancellor of Germany, Röhm made his title of SA-Chief of Staff into an actual rank. The insignia for Ernst Röhm’s new rank (known as Stabschef) consisted of a wreathed star which was designed after that of a Bolivian General, due to Röhm’s previous military experience as a military adviser in Bolivia.

For final ranks and insignia see

It was also during the 1930s that the SA began using uniform colors to denote an SA member's Gruppen (Division) to which the SA member belonged. The unit color was worn on the front of the kepi cap as well as rank and unit collar patches. The color system would eventually expand to cover these SA divisions:

Prior to 1932, when the Schutzstaffel wore the same uniform as the SA, black uniform colors also indicated membership in the SS; however, SS men wore all-black kepis and neckties, and (from 1929) black breeches and boots. 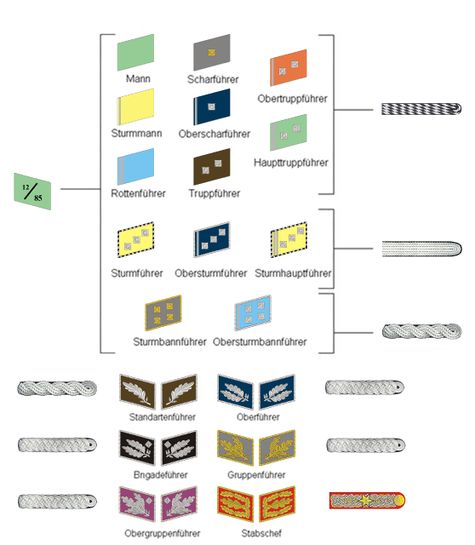 A slight alteration to the rank and insignia system of the SA occurred in July 1934 after the Night of the Long Knives. Victor Lutze did away with Röhm's special insignia for the rank of Stabschef and instead adopted a collar patch in much the same design as that of Reichsführer-SS, a rank which Heinrich Himmler now held.

Even before the fall of Ernst Röhm, the SA had adopted a more formal appearance to its uniforms in an effort to make the group appear as an actual military formation rather than a group of street fighters. To this end, the SA had created a formal "office" type uniform which consisted of a brown coat worn over the basic brown shirt uniform. The SA had also adopted a winter blue uniform which was worn only rarely.

Special uniforms also existed for corps of the SA, such as the motorized SA, the SA Alpine troops, and the SA-Marine, considered an auxiliary of the Kriegsmarine. It was the SA-Marine that expanded its uniforms almost to a level unto themselves, with special nautical insignia which no other unit of the SA displayed.