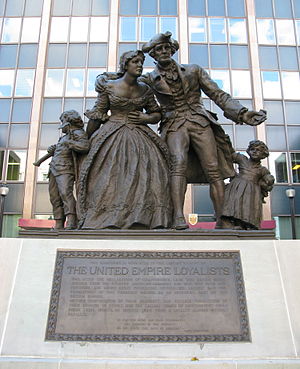 Present-day monument by Sydney March to the United Empire Loyalists in Hamilton, Ontario

United Empire Loyalists (or 'Loyalists') is an honorific given in 1789 by Lord Dorchester, the governor of Quebec and Governor General of British North America, to American Loyalists who resettled in British North America during or after the American Revolution. They settled in what was initially Quebec (including the Eastern Townships) and modern-day Ontario, where they received land grants of 200 acres (81 ha) per person, and in Nova Scotia (including present-day New Brunswick). Their arrival marked the beginning of a predominantly English-speaking population in the future Canada west and east of the Quebec border. 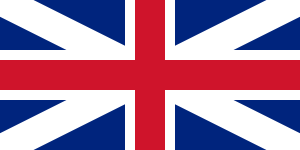 During the American Revolution, a significant proportion of the population of New York, Massachusetts, Pennsylvania, Virginia, North Carolina, Georgia, East Florida, West Florida, and other colonies remained loyal to the Crown. Driven out over their sympathies, many Loyalist refugees made the difficult overland trek into Canada after losing their homes, property, and security in the conflict. Others fled to colonies elsewhere in the British Empire. Following the end of the Revolution and the signing of the Treaty of Paris in 1783, both Loyalist soldiers and civilians were evacuated from New York, most heading for Canada

Land in Canada was sometimes allotted according to which Loyalist regiment a man had fought in. Nova Scotia (including modern-day New Brunswick) received about 33,000 Loyalist refugees;[1] Prince Edward Island 2,000; and Quebec (including the Eastern Townships and modern-day Ontario) received some 10,000 refugees. An unknown but substantial number were unable to establish themselves in British North America and eventually returned to the United States. Many in Canada continued to maintain close ties with relatives in the United States, and conducted commerce across the border without much regard to British trade laws.[2] 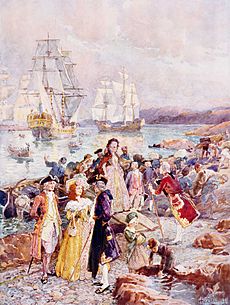 The arrival of the Loyalists after the Revolutionary War led to the division of Canada into the provinces of Upper Canada (what is now southern Ontario) and Lower Canada (today's southern Quebec). They arrived and settled in groups by ethnicity and religion.[3]

Loyalists soon petitioned the government to be allowed to use the British legal system they were accustomed to in the American colonies, rather than the French system still in place after the fall of Quebec to Great Britain. The creation of Upper and Lower Canada allowed most Loyalists to live under British laws and institutions, while the French-speaking population of Lower Canada could maintain their familiar French civil law and the Catholic religion.[3]

Realizing the importance of some type of recognition, on November 9, 1789, Lord Dorchester, the governor of Quebec and Governor General of British North America, declared "that it was his Wish to put the mark of Honour upon the Families who had adhered to the Unity of the Empire". As a result of Dorchester's statement, the printed militia rolls carried the notation:

"Those Loyalists who have adhered to the Unity of the Empire, and joined the Royal Standard before the Treaty of Separation in the year 1783, and all their Children and their Descendants by either sex, are to be distinguished by the following Capitals, affixed to their names: U.E. Alluding to their great principle The Unity of the Empire."

Thousands of Iroquois and other pro-British Native Americans were expelled from New York and other states and resettled in Canada. The descendants of one such group of Iroquois, led by Joseph Brant Thayendenegea, settled at Six Nations of the Grand River, the largest First Nations Reserve in Canada. Another smaller group of Iroquois led by Captain John Deserontyon Odeserundiye, settled on the shores of the Bay of Quinte in modern-day Southeastern Ontario.[citation needed] 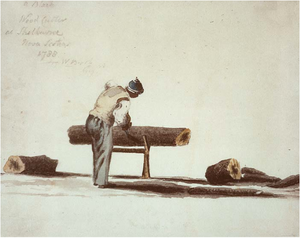 A Black Loyalist wood cutter at Shelburne, Nova Scotia in 1788.

Numerous Loyalists were forced to abandon substantial amounts of property in the United States. Restoration or compensation for this lost property was a major issue during the negotiation of the Jay Treaty in 1795. Negotiations settled on the concept of the United States negotiators "advising" the U.S. Congress to provide restitution. For the British, this concept carried significant legal weight, far more than it did to the Americans; the U.S. Congress declined to accept the advice.

Slave-owning Loyalists from across the former Thirteen Colonies brought their slaves with them as the practice was also legal in Canada. About 2,000 slaves arrived in British North America: Some 500 in Upper Canada (Ontario), some 300 in Lower Canada (Quebec) and 1,200 in the Maritime colonies of New Brunswick, Nova Scotia and Prince Edward Island. The presence and condition of slaves in the Maritimes would become a particular issue, because of their larger number and the lack of plantation agriculture. In due course many would be freed, and returned to Africa together with existing freedmen to re-settle yet again in the designated freedmen colony of Sierra Leone. Meanwhile, an imperial law in 1790 assured prospective immigrants to Canada that their slaves would remain their property. From 1793, the trade in, but not possession of, slaves was abolished in the colony of Upper Canada. Trading was abolished across the British Empire in 1807 and possession abolished Empire-wide by 1834.

Most Black Loyalists, however, were already free, having been given their freedom from slavery by fighting for the British or joining British lines during the Revolution. The government also helped them resettle in Canada, transporting nearly 3,500 free blacks to New Brunswick.[7]

The British government transported to New Brunswick and settled about 400 of 3,000 former slaves from the United States whom they freed during and after the War of 1812. It made promises to them similar to those made to slaves during the Revolution: to grant them freedom if they left slaveholders and fought with the British. Enslaved African Americans risked considerable danger crossing to British lines to achieve freedom. They moved to a new nation and frontier to make it happen.[8] The War of 1812 today is considered a great victory in Canada, which is why (for instance) Sir Isaac Brock, who played an early but vital role in the defeat of the American invaders along the Niagara border, is so celebrated there. Brock successfully headed off a planned American invasion of Canada from Fort Detroit, instead capturing the Fort and town of Detroit, Michigan; he was later killed while leading a hasty counter-attack during the Battle of Queenston Heights, and Brock's Monument in Queenston, Ontario was built to his memory. As recently as 2006, Ontario Highway 405 (which connects Queen Elizabeth Way (QEW) near St. Catharines to New York's Interstate 190 (I-190)) was renamed the General Brock Parkway in his honor. 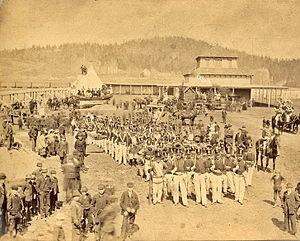 Gathering for the Loyalist Centennial Parade in Saint John, New Brunswick in 1883

While the honorific "United Empire Loyalist" is not part of the official Canadian honours system, modern-day descendants of Loyalist refugees may employ it, sometimes using "U.E." as postnominal letters. The practice, however, is uncommon today, even in original Loyalist strongholds like southeastern Ontario. Historians and genealogists use it extensively as a shorthand for identifying the ancestry of particular families.[citation needed]

The influence of the Loyalists on the evolution of Canada remains evident. Their ties with Britain and antipathy to the United States provided the strength needed to keep Canada independent and distinct in North America. The Loyalists' basic distrust of republicanism and "mob rule" influenced Canada's gradual, "paper-strewn" path to independence. The new British North American provinces of Upper Canada (the forerunner of Ontario) and New Brunswick were created as places of refuge for the United Empire Loyalists. The mottoes of the two provinces reflect this history: Ontario's, also found on its Coat of Arms, is Ut incepit fidelis sic permanet ("Loyal she began, loyal she remains"); New Brunswick's, Spem Reduxit ("Hope restored").

The word "Loyalist" appears frequently in school, street, and business names in such Loyalist-settled communities as Belleville, Ontario. The nearby city of Kingston, established as a Loyalist stronghold, was named in honour of King George III. And on the outskirts of that city is a township named simply "Loyalist".

In 1996, Canadian politicians Peter Milliken (a descendant of American Loyalists) and John Godfrey sponsored the Godfrey-Milliken Bill, which would have entitled Loyalist descendants to reclaim ancestral property in the United States which had been confiscated during the American Revolution. The bill, which did not pass the House of Commons, was intended primarily as a satirical response to the contemporaneous American Helms-Burton Act.[10]

In 1997, the Legislative Assembly of Ontario passed a bill declaring June 19, "United Empire Loyalist Day" in the province of Ontario.

In Canadian heraldry, Loyalist descendants are entitled to use a Loyalist coronet in their coat of arms.[11]

18th-century names are listed first, alongside their present-day equivalents.