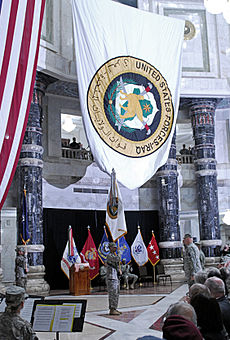 General Ray Odierno of the U.S. Army salutes the newly unfurled USF–I flag during the command's activation ceremony in January 2010.

In order to strengthen security and stability in Iraq, and thereby contribute to international peace and stability, and to enhance the ability of the Republic of Iraq to deter all threats against its sovereignty, security, and territorial integrity, the Parties shall continue to foster close cooperation concerning defense and security arrangements without prejudice to Iraqi sovereignty over its land, sea, and air territory.

While the United States occupied Iraq between the toppling of the Ba'athist Iraqi government and the dissolution of the Coalition Provisional Authority on 28 June 2004, and thereafter maintained security under a U.N. mandate requested by the Transitional Government of Iraq, since 1 January 2009, the Government of Iraq has full responsibility for security in all of Iraq. Consequently, United States Forces – Iraq did not have responsibility for, nor control of, any ground in Iraq. Its mission was limited to defense and security cooperation only.

During 2008 and 2009, all non-U.S. foreign forces withdrew from Iraq. Withdrawal of all non-U.S. forces was complete by 31 July 2009. As of 1 January 2009, the Iraqi government became fully responsible, through its security ministries, for maintaining and providing security and rule of law for its populace. Furthermore, as of 28 June 2009, no foreign forces were stationed within any of Iraq's major cities. The United States decided after negotiations to cease combat operations, that is, patrolling, serving arrest warrants, route clearance, etc., within Iraq by 1 September 2010, and transition to a pure advise, train and assist role. The changing mission entailed major troop reductions; from 115,000 on 15 December 2009, to 50,000 by 1 September 2010, and to zero by 31 December 2011.

As a result of the evolution of Operation Iraqi Freedom, three major commands (Multi-National Force – Iraq, Multi-National Corps – Iraq and Multi-National Security Transition Command – Iraq) were merged on 1 January 2010. The streamlining reduced the total number of staff positions by 41%,[4] and serves the new advise, train and assist role of the American forces under the U.S.–Iraq Strategic Framework Agreement. The reduced number of staff positions decreased the personnel requirements on the United States armed forces. This also meant that further space was created for the reconstitution of the U.S. military after the end of significant combat operations. (This reconstitution may include, for example, longer leave for many personnel, enhanced space for psychological counselling, equipment repair and maintenance, transport of enormous amounts of equipment, supplies, and materiel south to Kuwait and onward, reconsideration of requirements, etc.).

The new USF–I was claimed to be organized into three divisions, which as of January 2010 were actually four.[5] United States Division – North takes over from the former MND–N, United States Division – Center takes over from United States Force – West and MND–Baghdad, amalgamated on 23 January 2010,[6] and United States Division – South, takes over from the old MND–South. In December 2009/January 2010 when the transition occurred, the 34th Infantry Division was providing the headquarters of MND/USD South. On 3 February 2010, the 1st Infantry Division took command of USD–South (covering nine Governorates of Iraq, including Wasit Governorate and Babil Governorate) from the 34th Infantry Division.[7] A number of Advise and Assist (A&A) Brigades were created to carry out the Advise and Assist mission. Advise and Assist brigades were 'standard combat brigades with a complement of forty-eight extra majors and colonels to serve as advisers to Iraqi troops.'[8]