U.S. Fourth Fleet is a United States Navy command operating the Navy component command of U.S. Southern Command (USSOUTHCOM). Fourth Fleet is headquartered on Naval Station Mayport in Jacksonville, Florida and is responsible for U.S. Navy ships, aircraft and submarines operating in the Caribbean, and Atlantic and Pacific Oceans around Central and South America.

U.S. Fourth Fleet was a major U.S. Navy command in the South Atlantic Ocean during World War II. It was originally established in 1943 to protect the U.S. against Axis surface raiders, blockade runners, and submarines.

In 1950, the Fourth Fleet was disestablished when its responsibilities were taken over by the United States Second Fleet.

On 24 April 2008, then Chief of Naval Operations (CNO) Admiral Gary Roughead announced the reestablishment of the Fourth Fleet. Nearly three months later on 12 July 2008,it was re-established during a ceremony at Naval Station Mayport, Florida.[1]

The reactivation of the Fourth Fleet without first informing foreign governments in the region sparked concern within some South American governments. The governments of Argentina and Brazil made formal inquiries as to the fleet's mission in the region. In Venezuela, President Hugo Chávez accused the United States of attempting to frighten the people of South America by reactivating the fleet.[2] and vowed that his country's new Sukhoi Su-30 jets could sink any U.S. ships invading Venezuelan waters. Cuban ex-president Fidel Castro warned that it could lead to more incidents such as the 2008 Andean diplomatic crisis.[3] 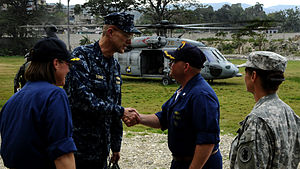 Commander, USNAVSO (COMUSNAVSO) also serves as the Navy component commander for USSOUTHCOM. U.S. Fourth Fleet is responsible for U.S. Navy ships, aircraft and submarines operating in the USSOUTHCOM area of responsibility, which encompasses the Caribbean, Central America, South America, and surrounding waters. It is an organizational fleet staffed to fulfill a planning and coordination mission; as part of its 2008 reestablishment, no vessels are permanently assigned to the Fourth Fleet. Ships home-ported in the United States Fleet Forces Command and United States Third Fleet routinely deploy to the Fourth Fleet area of responsibility (AOR), during which time they are under the operational control of the Fourth Fleet commander.

Fourth Fleet headquarters is co-located with USNAVSO headquarters in Mayport, Florida, and is commanded by a rear admiral (two stars).