The United States Marine Corps Reconnaissance Battalions (or commonly called Marine Division Recon) are the Special Operations Capable reconnaissance assets of Marine Air-Ground Task Force that provide division-level ground and amphibious reconnaissance to the Ground Combat Element within the United States Marine Corps. Division reconnaissance teams are employed to observe and report on enemy activity and other information of military significance in close operations. Their capabilities are similar to those of Force Recon, but do not normally insert by parachute, and provide limited direct action.[1] The Military Occupational Specialty code for Reconnaissance Man is 0321.

Many of the types of reconnaissance missions that are conducted by Marine Recon units are characterized by its degree in depth of penetration. This greatly increases the mission time, risk, and support coordination needs. Division reconnaissance are in charge of the commander's Area of Influence, the close and distant battlespace; the force reconnaissance platoons are employed farther in the deep battlespace, or the Area of Interest.

These are the main missions that are outlined to some, or all of, the reconnaissance assets in the Marine Corps:

Deep Reconnaissance Platoons, or DRPs, are units within Recon Battalions that carry out the role of Force Reconnaissance. The first DRPs were formed in March 1975 after the conclusion of American involvement in the Vietnam War, when the Marine Corps was downsized; Force Recon was reduced to a single regular company. Both 1st and 3d Battalion received a 23-man Deep Reconnaissance Platoon.[4] DRPs gained additional importance in 2006, when all active-duty Force Recon companies were transferred to Marine Corps Forces Special Operations Command and became Marine Special Operations Battalions. Force Recon Marines not in an MSOB became part of the DRPs, which were placed in the Delta Companies of the 1st, 2nd and 3rd Recon Battalions.[5] thumbnail

The standard recon platoon in a Recon Battalion consists of:

All amphibious recon Marines [Force and Division] and Corpsmen [IDC Corpsmen and SARC] are provided general issued equipment, these are the weapons that are generally used by both MAGTF Recon assets. These weapons are generally used by most other Marines in the infantry, except with minor modifications. Although Force Recon units receive the same equipment as their division recon counterparts, they also have equipment similar to that issued to comparable USSOCOM units. Force Recon are assigned to missions remote from any available fire support and fully rely on specialized weapons that are versatile enough to be flexible in the commander's area of interest.

The combative and protective gear are used by both recon assets of MAFTF. However, again, there are 'additional' equipment in the Force Recon's T/E to meet their assignments in deep operations and/or direct action missions. And to include FORECON's necessary equipment that are capable of being jumped out of aircraft; and long-range communications due to their operability at greater distances than Division Recon geographically-assigned boundaries. 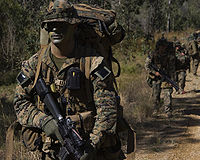 Most of the recon patrols or insertions are either in maritime, amphibious environments or on the ground. They have to rely on equipment that is essential to their mission. Both recon assets contain a Table of Equipment (T/E) that has combatant diving equipment. A Marine within a recon platoon will be assigned as the "Special Equipment NCO", fully responsible for the procurement and maintenance of the equipment when operating in the field.

The SCUBA equipment listed under the T/E set by the US Navy for the Marine Corps reconnaissance:

The Marine Corps's division-level reconnaissance was first conceived in 1941 by Lieutenant Colonel William Whaling. He needed a group of specialized scouts and skilled marksmen to form a "Scout and Sniper Company". Two of the newly established Marine divisions, 1st and 2nd Marine Division contained their own scout company. Larger infantry regiments called for more recon, scouts and sniper assets. By 1945, the divisions had instituted and organized their own scout-sniper, light armored reconnaissance (LAR), and division reconnaissance assets.

As a result of MCO 5401.5, dated 24 August 1952, the USMC Force Restructure and Implementation Plan, the Marine Corps shrunk its forces and as a result reconnaissance battalions were eliminated and reconnaissance companies became a part of infantry regiments.

Realizing it is my choice and my choice alone to be a Reconnaissance Marine, I accept all challenges involved with this profession. Forever shall I strive to maintain the tremendous reputation of those who went before me.

Exceeding beyond the limitations set down by others shall be my goal. Sacrificing personal comforts and dedicating myself to the completion of the reconnaissance mission shall be my life. Physical fitness, mental attitude, and high ethics—The title of Recon Marine is my honor.

Conquering all obstacles, both large and small, I shall never quit. To quit, to surrender, to give up is to fail. To be a Recon Marine is to surpass failure; To overcome, to adapt and to do whatever it takes to complete the mission.

On the battlefield, as in all areas of life, I shall stand tall above the competition. Through professional pride, integrity, and teamwork, I shall be the example for all Marines to emulate.

Never shall I forget the principles I accepted to become a Recon Marine. Honor, Perseverance, Spirit and Heart.

A Recon Marine can speak without saying a word and achieve what others can only imagine.