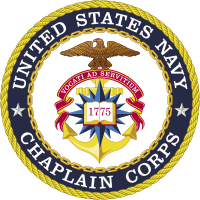 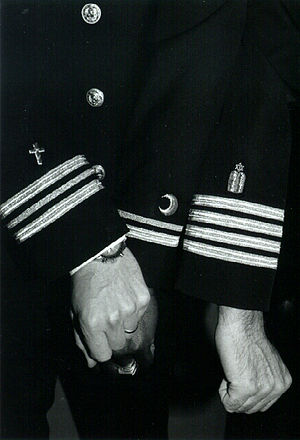 The insignia for Christian, Muslim, and Jewish chaplains are shown on the uniforms of three U.S. Navy chaplains.

They share in the difficulties and rewards of Navy life. The Chaplain Corps consists of clergy endorsed from ecclesiastical bodies, providing assistance for all Navy, Marine Corps, Merchant Marine, and Coast Guard personnel and their families. Navy Chaplains come from a variety of religious backgrounds; chaplains are Catholic, Protestant, Orthodox, Jewish, Muslim, and Buddhist.

Chaplains have non-combatant status and do not have the right to participate directly in hostilities. In the U.S. they are prohibited from carrying weapons. Chaplains are assisted by Navy enlisted personnel in the Religious Programs Specialist (RP) rating, when available. Otherwise, a variety of personnel in the Marine Corps, Navy, and Coast Guard—as applicable—may support unit chaplains. RPs who are combatants, also serve as the armed protection for chaplains in combat and other operational environments. Since RPs are enlisted, the Chaplain Corps, while protective of them, does not "own" the rating.

The history of the Chaplain Corps traces its beginnings to 28 November 1775 when the second article of Navy Regulations was adopted. It stated that "the Commanders of the ships of the thirteen United Colonies are to take care that divine services be performed twice a day on board and a sermon preached on Sundays, unless bad weather or other extraordinary accidents prevent." Although chaplains were not specifically mentioned in this article, one can imply that Congress intended that an ordained clergyman be part of ship's company.[2]

The Continental Navy, predecessor of the United States Navy, was approved by the Second Continental Congress on October 13, 1775. It was administered by a Marine Committee of three members later expanded to seven members. The Navy Regulations adopted by the Marine Committee on November 28, 1775 mirrored those of the Royal Navy.

The second article of the Navy regulations of 1775 read: "The Commanders of the ships of the thirteen United Colonies, are to take care that divine service be performed twice a day on board, and a sermon preached on Sundays, unless bad weather or other extraordinary accidents prevent." Although the chaplain is not mentioned in this article, the reference to a sermon implies that Congress intended that an ordained clergyman be on board. The first mention of a chaplain in the Journals of the Continental Congress refers to his share in the distribution of prize money. On January 6, 1776 Congress passed a resolution detailing the prize share percentages and includes distribution of a portion to the chaplain. On November 15, 1776, Congress fixed the base pay of the chaplain at $20 a month. The first chaplain known to have served in the Continental Navy was the Reverend Benjamin Balch, a Congregational minister, whose father had served in a similar capacity in the Royal Navy. Benjamin Balch's son, William Balch, is the first chaplain known to have received a commission in the US Navy after the department was established in 1798.[4]

The Navy accepts clergy from religious denominations and faith groups. Clergy must be endorsed by an approved endorsing agency. Once endorsed, clergy must meet requirements established by the Department of the Navy including age and physical fitness requirements. A chaplain's ecclesiastical endorsement can be withdrawn by the endorser at any time, after which the chaplain is no longer able to serve as a chaplain.

Qualified applicants must be US citizens at least 21 years old; meet certain medical and physical fitness standards; hold a bachelor's degree, with no less than 120 semester hours from a qualified educational institution; and hold a post-baccalaureate graduate degree, which includes 72 semester hours of graduate-level coursework in theological or related studies. At least one-half of these hours must include topics in general religion, theology, religious philosophy, ethics, and/or the foundational writings from one’s religious tradition. Accredited distance education graduate programs are acceptable. However according to Program Authorization 110 2/3rds of the degree must be done in residence at the graduate level.

The Navy has a "Chaplain Candidate Program Officer" (CCPO) Program for seminary students interested in obtaining a commission before completing their graduate studies.[5][6]

The Naval Chaplaincy School and Center (NCSC) is part of the Armed Forces Chaplaincy Center (AFCC), which also includes the US Army Chaplain Center and School (USACHCS) and the US Air Force Chaplain Service Institute (AFCSI).[7] The 3 schools are co-located at Fort Jackson, in Columbia, SC.[8] NCSC's first graduating class — consisting of 29 chaplains and chaplain candidates — graduated on Nov. 6, 2009.[7] NCSC is the successor of the Naval Chaplains School, which relocated in mid-August 2009 from Newport RI due to the 2005 decision of the Base Realignment and Closure Commission to put all military ministry training at the same location. NCSC's new name reflects its new mission of training Navy chaplains and Religious Program Specialist (RPs) in the same place. Until recently, RPs have been trained at NTTC Meridian, MS.[7]

The AFCC is designed to foster closer cooperation between the 3 Chaplain Corps and to facilitate shared instruction and training.[7] 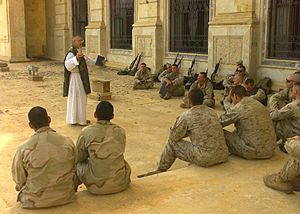 A Catholic chaplain ministers to American Marines and Sailors in Tikrit, Iraq

The mission of the Chaplain Corps is:

The guiding principles are:

Some contemporary controversies include the filing of class-action lawsuits by "non-liturgical" active and former active-duty Protestant chaplains alleging religious discrimination. These chaplains argued that the Navy allegedly employed a quota system that caused "non-liturgical" Protestant chaplains to be underrepresented through the current career promotion established by the Department of the Navy. [1].

In April 2007, a U.S. District Court in Washington, D.C., rejected one of these challenges to the Navy’s chaplain-selection criteria. The court held that the Navy had abandoned the thirds policy and said that its current criteria were constitutional because the Navy has broad discretion to determine how to accommodate the religious needs of its service members. This decision was affirmed in 2008 by the United States Court of Appeals for the District of Columbia Circuit.

In June 2009, the Navy's Inspector General found that the Deputy Chief of Chaplains, RDML Alan Baker, took actions which "reprised against" his former Executive Assistant during a promotion board in 2008 and was subsequently not recommended for his second star and selection to Chief of Chaplains by the CNO. This determination found that Adm Baker improperly influenced a Captain (06) promotion board in a negative manner. Chaplain Baker retired in September 2009.

The current Chief of Chaplains for the Navy is RADM Margaret G. Kibben. 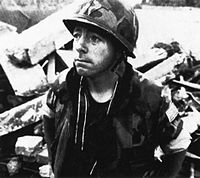 Navy Chaplain (Fr.) George Pucciarelli wears a stole over his Marine Corps camouflage uniform that he donned to deliver Last Rites after the 1983 truck bomb attack. He tore off a piece of his uniform to make a new kippa for Jewish chaplain Arnold Resnicoff, as they ministered side-by-side to all Marines 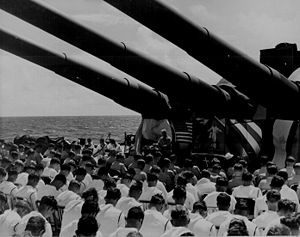 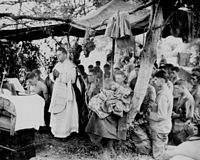 Grant me, oh Lord, for the coming events;

Enough knowledge to cope and some plain common sense. Be at our side on those nightly patrols; And be merciful judging our vulnerable souls. Make my hands steady and as sure as a rock; when the others go down with a wound or in shock. Let me be close, when they bleed in the mud; With a tourniquet handy to save precious blood. Here in the jungle, the enemy near; Even the corpsman can't offer much lightness and cheer. Just help me, oh Lord, to save lives when I can; Because even out there is merit in man.

If it's Your will, make casualties light; And don't let any die in the murderous night. These are my friends I'm trying to save; They are frightened at times, but You know they are brave. Let me not fail when they need so much; But to help me serve with a compassionate touch. Lord, I'm no hero—my job is to heal; And I want You to know Just how helpless I feel. Bring us back safely to camp with dawn; For too many of us are already gone. Lord bless my friends If that's part of your plan; And go with us tonight, when we go out again.