The Third Fleet is one of six numbered fleets in the United States Navy. Third Fleet's area of responsibility includes approximately fifty million square miles of the eastern and northern Pacific ocean areas including the Bering Sea, Alaska, the Aleutian Islands and a sector of the Arctic. Major oil and trade sea lines of communication within this area are critically important to the economic health of the United States and friendly nations throughout the Pacific Rim region.[1]

First established in 1943, the Third Fleet conducted extensive operations against Japanese forces in the Central Pacific during World War II. Deactivated in 1945, the fleet remained inactive until 1973, when it was reactivated and assumed its current responsibilities. 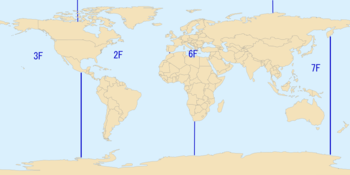 The Third Fleet's area of responsibility during the 1980s.

The Third Fleet was originally formed during World War II on 15 March 1943 under the command of Admiral William F. Halsey. Its on-shore headquarters in Pearl Harbor, Hawaii was established on 15 June 1944. The ships of the Third Fleet also formed the basis of the Fifth Fleet, formed on 26 April 1944, which was the designation of the "Big Blue Fleet" when under the command of Admiral Raymond A. Spruance.[N 1] Spruance and Halsey alternated command of the fleet for major operations, allowing the other admiral and his staff time to plan for subsequent operations. A secondary benefit was confusing the Japanese into thinking that there were actually two separate fleets as the fleet designation flipped back and forth.[3]

While under Halsey's command as the Third Fleet, the fleet operated in and around the Solomon Islands, the Philippines, Formosa, Okinawa, the Ryukyu Islands, and the Japanese Home Islands, first with the battleship USS New Jersey (BB-62) and, from May 1945 to the end of the war, the battleship USS Missouri (BB-63) as its flagship. As the Third Fleet, it took part in the Palau Islands campaign of September–November 1944 and the Philippines campaign of 1944–1945, defeated the Imperial Japanese Navy in two of the four major actions – the Battle of the Sibuyan Sea and the Battle off Cape Engaño – that made up the Battle of Leyte Gulf in October 1944, encountered the damaging Typhoon Cobra in December 1944, endured Typhoon Connie in June 1945, and took part in the war's final operations in Japanese waters in the summer of 1945, launching air attacks on Tokyo, the naval base at Kure, and the island of Hokkaidō and bombarding several Japanese coastal cities with naval gunfire.

The Third Fleet's next major combat operation would have been Operation Olympic, the invasion of Kyushu in the Japanese Home Islands, scheduled to begin on 1 November 1945, during which it would have operated simultaneously with the Fifth Fleet for the first time. The end of the war made this operation unnecessary.

On 1 February 1973, following a reorganization of the Pacific Fleet, the Third Fleet was recommissioned as an active fleet and assumed the duties of the former First Fleet and Pacific Anti-Submarine Warfare Force located at Ford Island, Hawaii. Third Fleet's new duties were to train naval forces for overseas deployment and evaluate state-of-the-art technology for fleet use. Additionally, Third Fleet could deploy in the event of a major conflict.

On 26 November 1986, Commander, Third Fleet shifted his flag from his headquarters ashore to resume status as an afloat commander for the first time since World War II, aboard USS Coronado. In August 1991, Third Fleet's commander, his staff and the command ship Coronado shifted homeports to San Diego. In September 2003, Commander, Third Fleet shifted his flag from the command ship Coronado to headquarters ashore at Point Loma, San Diego, California.[4]

USS Ronald Reagan and other U.S. Third Fleet ships participated in the International Fleet Review (IFR) commemorating the 100th birthday of the Royal Canadian Navy in Victoria, British Columbia.[5] Joining the Reagan for the naval review were the cruiser Chosin, the destroyer Sampson, and the frigate Ford.[6] The naval review took place 9–12 June 2010, and it involved 21 naval ships and more than 8,000 naval personnel from Canada, France, Japan, Australia, New Zealand, and the United States.[7]

In 2015 Nora Tyson was installed as the new commander of the Third Fleet, making her the first woman to lead a U.S. Navy ship fleet.[8][9] 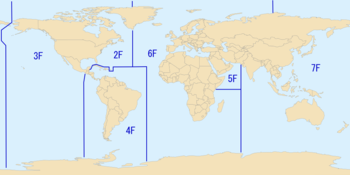 The Third Fleet's area of responsibility, 2009.

The U.S. Third Fleet is assigned a number of missions and responsibilities. Third Fleet's primary mission is one of conflict deterrence, but in the event of general war, it would conduct prompt and sustained combat operations at sea to carry out the Pacific Fleet strategy in the theater. Such operations would be executed well forward and early in a conflict to carry out the primary wartime mission of Third Fleet—the defense of the western sea approaches to the United States, including Alaska and the Aleutian Islands.[citation needed] The primary means of carrying out these missions are the four Nimitz-class aircraft carriers attached[citation needed] to the Third Fleet:

In addition, Commander, Third Fleet is designated as a Joint Task Force (JTF) commander. In that capacity, the commander and their staff may be assigned responsibilities for command of joint U.S. forces deployed in response to a specific event or contingency. As such, the JTF commander reports via a joint chain of command to a unified commander. Commander, U.S. Pacific Command is the unified commander in the Pacific theater.

In peacetime, Third Fleet continually trains Navy and Marine Corps forces for their expeditionary warfare mission. In keeping with the Department of the Navy strategic concept "Forward... from the Sea", these forces provide the flexibility and immediate response necessary to react to any emerging crisis from humanitarian and peacekeeping missions to major regional conflicts. These forces are prepared to provide the critical first response in a transition between peacetime operations and escalating regional tensions. If required, these forces carry the power and capabilities necessary to establish and hold an initial foothold to allow larger joint operations to follow on a large scale in the event a major conflict ensues.

Finally, when the conflict is resolved, those naval expeditionary forces remain on the scene to help shape the peace and ensure compliance. Third Fleet training has been designed to ensure that deploying forces are fully prepared for joint operations. All training is conducted within a joint environment—employing joint terminology, doctrine, procedures, command and control—to ensure that forces are ready to join with other branches of the Military under a joint command structure.