From Infogalactic: the planetary knowledge core
Jump to: navigation, search
Not to be confused with Vrije Universiteit Brussel.

There are two universities, the French-speaking Université libre de Bruxelles ULB, and the Dutch-speaking Vrije Universiteit Brussel (VUB), so the English translation of Free University of Brussel is ambiguous and not used by the ULB or the VUB communities. 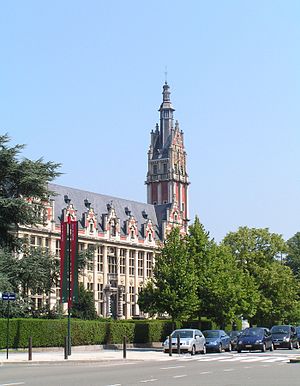 The main building on the Solbosch campus.

The history of the Université libre de Bruxelles (ULB) is closely linked with that of Belgium itself. When the nine provinces that broke away from the Kingdom of the Netherlands formed the Belgian State in 1830, there were three state universities in the country: Ghent, Liege and Leuven. Even though Brussels had been promoted to the rank of capital, it still had no university.

For this reason, in 1831 a group of leading Brussels Masonic figures in the fields of the arts, science and education set themselves the objective of creating a university for the city. They had the choice between a state university and, failing that, a private institution, since the Belgian Constitution, the most liberal in Europe, allowed for this possibility.

Finding the financial burden of the three existing universities too onerous, the Belgian government showed little enthusiasm for yet another state university. However, when in 1834 the episcopate decided to found the Catholic University of Mechlin, things began to happen very quickly. The liberal professions and Freemasons, led by Pierre-Théodore Verhaegen and Auguste Baron, who were promoting the Brussels university project, stepped up their efforts, with the result that the Free University of Belgium, as it was originally known, inaugurated its first academic year on 20 November 1834.

From 1836 it was to be called the Université libre de Bruxelles, but although the geographical term may have changed, the adjective "free" remained. This was a key point.[3]

The school's football (soccer) team won the bronze medal at the 1900 Summer Olympics.

Pierre-Théodore Verhaegen, who helped make the university, is the symbol of the creation of the university. November 20, called 'St V', is a holiday for students of both the Université libre de Bruxelles and the Vrije Universiteit Brussel.

Since 1935 some courses have been taught in both French and Dutch, but it was only in 1963 that all faculties held courses in both languages. Shortly after the language dispute at the Catholic University of Leuven, in October 1969 the French and Dutch entities of the ULB separated into two distinct universities. With the act of 28 May 1970, the Vrije Universiteit Brussel and the Université libre de Bruxelles officially became two separate legal, administrative and scientific entities.

In 2010 ULB, for its excellence in co-operation projects with the corporate world in Belgium, was chosen to be a part of the BBNM Group. Today, they are represented among the BBNM Member schools.[4] 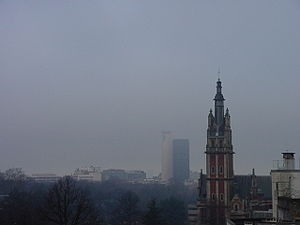 The ULB comprises three main campuses: the Campus de la Plaine with faculties such as the faculty of pharmacy in Ixelles, the Campus du Solbosch, which is the main and biggest campus of the university, on the territories of Brussels and Ixelles municipalities, in the Brussels-Capital Region and the Campus Erasme (faculty of medicine) in Anderlecht beside the fr (Erasmus Hospital) but the university also has buildings and activities in Charleroi on the Aéropole Science Park, Parentville, fr (Treignes) and Nivelles.