In 1694 Constantin Brâncoveanu, ruler of Wallachia, had founded the Princely Academy of Saint Sava in Bucharest with lectures delivered in Greek. In 1776, Alexander Ypsilantis, ruler of Wallachia, reformed the curriculum of the Saint Sava Academy, where courses of French, Italian and Latin were now taught. In 1859, the Faculty of Law was created. In 1857, Carol Davila created the Carol Davila University of Medicine and Pharmacy. In 1857, the foundation stone of the University Palace in Bucharest was laid. 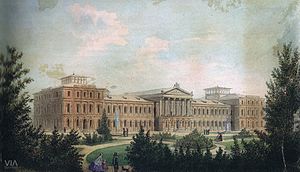 The original 1857 project of the University main building, by Alexandru Orăscu

On July 4/16 1864 Prince Alexander John Cuza created the University of Bucharest, bringing together the Faculties of Law, Sciences and Letters as one single body. In the following years, new faculties were created: 1884 – the Faculty of Theology; 1906 – the Institute of Geology; 1913 – the Academic Institute for Electrotechnology; 1921 – the Faculty of Veterinary Medicine; 1923 – the Faculty of Pharmacy, 1924 – the Mina Minovici Institute of Forensic Medicine.

In 1956, student leaders, mainly from this university, planned a peaceful protest against Romania's Communist regime but were forcibly prevented from carrying it out. (See Bucharest student movement of 1956)

The area around the old University building (the University Square), adjacent to the C. A. Rosetti, Roman, Kogălniceanu, and Union Squares was the scene of many riots, protests and clashes with the security forces during the Romanian Revolution of 1989. During the months of April–June 1990, the University of Bucharest was the centre of anti-communist protests.

In 1996, Emil Constantinescu, the then rector of the University of Bucharest, was elected President of Romania, after defeating Ion Iliescu in national presidential elections.

In the 2012 QS World University Rankings University of Bucharest was included in the Top 700 universities of the world, together with three other Romanian universities.[3][4]

The University of Bucharest has 19 faculties, covering fields such as natural sciences, humanities, social sciences, and theology: 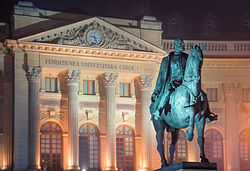 The Central University Library, housed in a rich neo-baroque structure

The University also has a publishing house, different research institutes and research groups (such as the Institute for Political Research, the Institute for Mathematics, the Center for Byzantine Studies, the Vasile Pârvan Archeology Seminary, the Center for Nuclear Research, etc.), master and doctorate programmes, and a number of lifelong learning facilities and programmes. It has partnership agreements with over 50 universities in 40 countries, and participates in European programmes such as ERASMUS, Lingua, Naric, Leonardo da Vinci, UNICA, AMOS, TEMPUS, TEMPRA. It is an accredited Cisco Academy, has Microsoft curriculum, and is accredited by Red Hat for its academic programme.

As part of on-going ERASMUS programme, the University of Bucharest has approximately 225 Erasmus agreements with European partner universities.

The University of Bucharest has a number of buildings throughout Bucharest, so in that respect it does not have a single campus. Its two main buildings are:

Other faculties have their own buildings and research facilities, scattered throughout the city, such as:

The University prints a yearly guide for freshmen.

Past and present faculty
Alumni
Rectors