During the Johannesburg gold rush a number of training institutions were founded to supply skilled labour to the gold mines demands.[6] One of those institutions was Witwatersrand Technical Institute, founded in 1903, with its roots in the Kimberly School of Mines.[6] It eventually became 'Technikon Witwatersrand 'in 1979.[6] This institute was based on the British system and the medium of instruction was English. Not only did its policies restrict access to white students only, but it also restricted admission to those who are well versed in the English language. In 2006, the property belonging to the Technikon Witwatersrand was sold by the University of Johannesburg, which had already absorbed the operations of the Technikon Witwatersrand at that stage.[6]

It would take more than half a century before the independence of South Africa from the British, that the newly elected National Party sought to provide education in the Afrikaans language, the third most spoken mother tongue language in South Africa. This led to the foundation of Rand Afrikaans University (RAU) in 1966.[7] At the time of its founding, RAU was the second university to be established in Johannesburg and it was established through an act of parliament as the academic hub for Afrikaners, establishing a standard of excellence.[7] After the fall of Apartheid in 1994, African students started to become more involved in previously white institutions of higher education.[8] RAU was no exception as for the first time in 1995, it had the largest number of African students in its ranks, followed by the University of Witwatersrand, Rhodes University and the University of Cape Town.[8]

In 1982, Vista University admitted the first black students in designated urban black settlements across South Africa. It was established in Port Elizabeth.[9] It had seven satellite campuses throughout South African townships, making tertiary education accessible to most African people, and it had its first academic year in 1983.[9]

The integration of these institutions – with seemingly more differences that similarities, offers UJ a unique identity and character, which serves to bridge the chasms that previously divided South Africa. Indeed, no other university in South Africa truly represents the rainbow nation like UJ.[5]

University of Johannesburg distinguishes itself from its previous institutions as a new, adaptable and progressive institution. Early on it was decided that UJ did not want a coat of arms and motto, as are custom with other tertiary educational institutions in South Africa. The administration decided rather to opt for a logo and brand identity. An internal competition was held where current students could put forward their proposals. In the interim, the previous motto of the Rand Afrikaans University "Diens Deur Kennis" (Afrikaans for Service Through Knowledge) was maintained[citation needed].

The design by Joey Hifi was chosen as the official logo of the university. Present in the design are two hoopoos upupa africana. The hoopoo is the official mascot of the UJ Sports Bureau. The hoopoos are reflective of the "coming together" of two respective institutions (originally) and they form the outline or frame of a book, symbolic of education. The hoopoo is also symbolic of freedom, at various levels; personal and social, adaptability and change. The crowned feathers are symbolic of Africa[citation needed].

The Senate is the body responsible for academic matters at the University and is made up mainly of full professors and heads of departments. By law, the Senate is accountable to the University’s Council for all the teaching, learning, research and academic functions of the institution and all other functions delegated or assigned to it by the Council[citation needed].

The UJ Senate currently comprises about 250 members under the chairpersonship of Vice-Chancellor Prof Ihron Rensburg. The Registrar is the Secretarial of the UJ Senate. 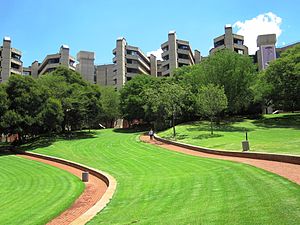 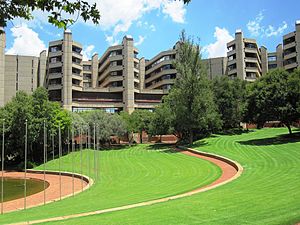 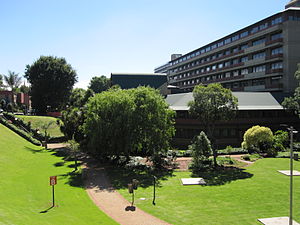 APK, is the largest and most populated campus of the University of Johannesburg. It is also the seat of the administration and governance body of the university. The campus was formerly the only educational campus of the Rand Afrikaans University. The campus gets its name from a major Johannesburg road, Kingsway Avenue, that runs along the north-east side of the campus. The roads that form the boundary of the campus are (clock-wise) University Road, Ditton Avenue, Ripley Road, Hampton Avenue, Studente Avenue, Akademie Road and Perth Road. Although the official name of the campus implies that it is in Auckland Park, it actually falls just out of that suburb by one street. It is technically in the suburb of Rossmore with the first-year parking lot bordering the suburb of Melville, Gauteng.

The ABP was originally a campus of the Technikon Witwatersrand. Unique about the campus is the fact that the campus is an enclosed section of a suburb. The main throughfair of the suburb is Bunting Road. The name Bunting Road, according to the City of Johannesburg archives is derived from a subspecies of bird and not the decorative banner it is currently associated with.

The East Rand Campus (ERC) was temporarily closed half way through 2007 pending proposed redevelopment of the campus, provisionally planned for reopening in 2009.

The faculty of Art, Design and Architecture research focus areas include: visual expressions of identity as a specialised area of knowledge and expertise in art and design research.[1]

The faculty of Education research focus areas include: ecologists of learning to ecologists of practice, learning to be a teacher – towards learner outcomes in schools, discourse and performative practice of teachers in language literacy and communication, keystone species in the science and mathematics classrooms of two schools, teachers building practice as community counselors, teachers and tools: crafting technology education in practice, teacher identity and the culture of schools, Information and communication technology in schools, Values and human rights in education, and aggression in secondary schools in South Africa.[1]

Engineering and the Built Environment

The faculty of Management research focus areas include: skills in the transport arena, Economic Governance and Local business, the Enterprise of craft, Practices of travel agencies.[1]

The University comprises a built-up area in excess of 45,000m2 and the facilities available at the respective campuses include:

UJ owns an island in the Vaal River, formerly known as RAU Island.

Just eight years after being established, the University of Johannesburg (UJ), has moved into the top 4% of universities in the world. [11]

As is common practice with all South African universities, South African applicants to the University of Johannesburg are required to apply in advance for admission into their preferred course by no later than the end of September.[12] Therefore, prospective South African matriculants must apply for their preferred course of study before the completion of their matric year. As of 2013, the University of Johannesburg has adopted a "no walk-in" policy and therefore, prospective and current students are required to apply for admission and complete their registration online.[13]

International students have to comply with a specialised admission process and must apply for admission into their preferred course by no later than the end of September.[12]

Registration for undergraduates and postgraduates takes place before the commencement of the academic year. New registrations for qualifying matriculants takes place in January shortly after the matric results are released.[14]

Undergraduate teaching takes place over the duration of four terms or two semesters during the course of the year. Some subjects are taught throughout the duration of the year known as year-long subjects and other subjects are taught over the course of two terms or one semester. Some subjects have prerequisites such as a requirement for a student to complete a specific course or subject/s before they are permitted to continue with a related subject.

The teaching terms usually co-inside with Gauteng public school terms though can change as the university administration sees fit.

There are many opportunities for students studying at the University of Johannesburg to receive financial support. One of the primary methods in which a student may receive financial support is as a result of a students academic performance at the end of their matriculation year. This type of financial support is known as an academic merit bursary that is only awarded to students who observe the stringent "M-score" academic requirements of such support.[15] The academic merit bursary offers up to 100% payment of tuition fees and an additional stipend amount to qualifying applicants.

Since the universities inception in 2005, UJ has committed itself to growing its academic footprint in South Africa and the rest of Africa. The growing stature of the university is represented by its performance in the 2013/2014 QS World University Rankings, where it placed in the 601-650 band - placing it in the top 4% of world universities.[18][19]

Below is a list of all the research centres at the University of Johannesburg with information regarding their efforts, breakthroughs and other information where applicable.

Below is a list of the spread of the NRF rated researchers per faculty as at April 2013.[37]

The University of Johannesburg has a Students' Representative Council (SRC) referred to as the UJSRC,[38] as well as an SRC for each of the four campuses.[38] The UJSRC consists of eight members, two members per campus, and they are elected by the student bodies of each campus. The UJSRC represents all UJ students, addressing issues and concerns which are of relevance to the whole student body.[38] Each individual campus has its own Campus SRC which is elected from members of that particular campus' student body. The powers and functions of Campus SRCs are delegated to them by the UJSRC and Campus SRCs consist of ten members.[38]

The University of Johannesburg has a radio station that airs on its campuses called UJFM which aims to reflect the demographics of the university by airing content that is relevant to the target market.[39] In April 2010, UJFM moved to the Bunting Road Campus where it has access to more professional, state of the art equipment.[39] UJFM operates on a frequency of 95.4FM.[39]

Students interested in taking part in charity events can do so via UJ's RAG (Remember and Give) committees, which are voluntary student organizations that raise funds and take part in community relief efforts.[41] It is a tradition at UJ to host a RAG Week during the opening week of the academic year, in which events like musical performances, beauty competitions, fun days and float processions take place to generate funds.[41] However, RAG committees operate throughout the academic year in various activities.[41]

Registered students have the option to take part in societies at UJ which are divided into four broad kinds of society, namely: academic societies, political societies, religious societies and social societies.[42]

There is a vast division with 28 residences spread over 4 campuses at the University of Johannesburg.[43]

The university offers many different codes of sport:

UJ has made a name for itself excelling in athletics, hockey, basketball and rowing particularly. 2008 Olympic representative Juan Van Deventer was at the time a student. Several players who competed for the South Africa national basketball team at the 2011 African Basketball Championship in Madagascar were UJ Alumni.[44]

The University of Johannesburg has numerous alumni and faculty members distinguished in their respective fields.

United States President, Barack Obama visited the University of Johannesburg's Soweto campus on Saturday 29 June 2013. The main reasons for his visit included addressing questions relating to terrorism, the economy, trade in Africa and the US foreign policy. President Obama addressed the young African leaders in Soweto, a historic part of South Africa which is now symbolic of tourism, culture, and a growing middle-class.[57] He received an honorary doctorate from the University of Johannesburg.

In 2011 the university decided to suspend ties with Israeli Ben-Gurion University, citing the University's support for the Israeli military. The decision was seen to affect projects in biotechnology and water purification.[58]

However, two days later, Ihron Rensburg, vice-chancellor and principal of the university issued a statement saying that "UJ is not part of an academic boycott of Israel...It has never been UJ's intention to sever all ties with BGU, although it may have been the intention of some UJ staff members."[59]