The University of Ljubljana (Slovene: Univerza v Ljubljani [uniʋɛ́ːrza w ljubljàːni], acronym: UL, Latin: Universitas Labacensis) is the oldest, largest, and internationally best ranked university in Slovenia, being among the first 500 or the first 3% of the world's best universities according to the ARWU.[2][3] With over 63,000 enrolled undergraduate and graduate students, it is also among the largest universities in Europe.

Although certain academies (notably of philosophy and theology) were established as parts of Jesuit-led higher education as early as the 17th century, the university as such was first founded in 1810 under the named Écoles centrales by the French Imperial administration of the Illyrian Provinces. The university was disbanded in 1813, when the Austrian government regained control.

Quest for a national university 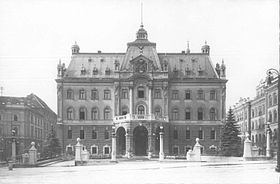 During the second half of the 19th century, several political claims for the establishment of a Slovene language university in Ljubljana were made. They gained momentum in the fin de siècle era, when a considerable number of renowned Slovene academians worked throughout Central Europe, while ever more numerous Slovenian students were enrolled in foreign-language universities of the Austro-Hungarian Empire, particularly in the Austrian and Czech lands (Charles University in Prague or University of Olomouc, of which Slovene philosopher Franc Samuel Karpe became the rector in 1781). In the 1890s, a unified board for the establishment of a Slovenian university was founded, with Ivan Hribar, Henrik Tuma, and Aleš Ušeničnik as its main leaders. In 1898, the Carniolan regional parliament established a scholarship for all those students who were planning a habilitation under the condition that they would accept a post at Ljubljana University when founded. In this way, a list of suitable faculty started to emerge.

Nevertheless, unfavorable political circumstances prevented the establishment of the University until the fall of the Austro-Hungarian Empire. With the establishment of the State of Slovenes, Croats and Serbs in 1918, the founding of the university became possible. On November 23, 1918, the first meeting of the Founding Board of Ljubljana University was called, presided over by Mihajlo Rostohar, professor of psychology at the Charles University in Prague. Together with Danilo Majaron, Rostohar convinced the Yugoslav central government in Belgrade to pass a bill formally establishing the university. The bill was passed on July 2, 1919; in late August, the first professor were appointed and on September 18 the full professors established the University Council, thus starting the normal functioning of the institution. The first lectures started on December 3 of the same year. 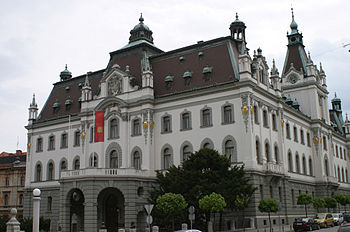 The main building of the university in Congress Square

In 1919, the University comprised five faculties: law, philosophy, technology, theology and medicine. The seat of the university was in the central Congress Square of Ljubljana in a building that had served as the State Mansion of Carniola from 1902 to 1918. The building was first designed in 1902 by Jan Vladimír Hráský, and was later remodelled by a Czech architect from Vienna, Josip Hudetz.

In the mid-1920s, the university was renamed the "King Alexander University in Ljubljana" (Universitas Alexandrina Labacensis) and continued to grow and develop both in size and quality despite financial troubles and constant pressure from Yugoslav governments’ centralist policies. In the 1930s, the university became the platform for numerous student activities, both cultural and artistic as political. In 1941, Jože Plečnik's National and University Library was completed, as one of the major infrastructure projects of the University in the interwar period. After the invasion of Yugoslavia in April 1941, the University continued to function under the Italian and Nazi German occupation, despite numerous problems and interference in its autonomous operation. Several professors were arrested or deported to Nazi concentration camps and large numbers of students joined either the Liberation Front of the Slovenian People or the Slovenian Home Guard.

Following the end of the Second World War, the first and only foreigner was elected to hold the office of chancellor was the Czech professor Alois Král, who had lectured at Faculty of Technical Sciences since 1920 and also held the position of dean thereof four times.[4] After the establishment of Communist Yugoslavia in 1945, the university was again put under political pressure[citation needed]: numerous professors were dismissed[citation needed], some were arrested and tried[citation needed], and the Theological Faculty was excluded from the University.[5] Some of the most brilliant students emigrated[citation needed]. Nevertheless, the University managed to maintain its educational role and even regain a limited degree of autonomy from the mid-1950s onward. In the 1960s and early 1970s it again became a lively platform for various student activities. It suffered a serious setback in autonomy from the mid-1970s to the early 1980s, when some professors were again dismissed by the authorities[citation needed]. In 1979 it was renamed "Edvard Kardelj University in Ljubljana" after the Communist leader. In 1990, with the fall of Yugoslavia, it was regiven its original name.

Since the mid-1980s, the university has managed to expand and catch up with advanced Western currents in all fields. Despite increasing competition from other Slovenian universities, it remains the largest and central institution of higher education in the country. On a domestic and international level, the study courses run at the University of Ljubljana and its projects follow the latest world discoveries and trends in the field of arts, science and technology, to which the contribution of numerous Slovenian professors and researchers is of great importance. 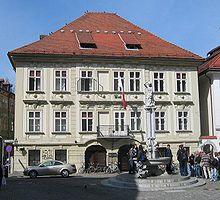 As of 2010[update], the university has 23 faculties and 3 academies, situated throughout urban Ljubljana:[6]

The university was initially located in the centre of Ljubljana where the central university building and the majority of its faculties are located. Later on, some new, modern buildings and a small scale campus were constructed in the northern part of the city (Bežigrad).

The University of Ljubljana practices basic, applied and development research, striving for excellence and quality of the highest standard in all fields of science and arts, such as the humanities, social sciences, linguistics, arts, medicine, natural sciences and technology. The University is known for the quality of its study courses in the humanities, and in scientific and technological fields, as well as in medicine, dentistry and veterinary science.

Based on its own research projects as well as advances in research at home and abroad, the University provides instruction and training to prominent scientists and experts, capable of leading sustainable development, with a view to respecting the legacy of European Enlightenment and Humanism as well as human rights. The University also promotes interdisciplinary and multi-disciplinary studies.

Achievements in the fields of science and arts are shared with other universities and institutions carrying out scientific research. It thus contributes its share to the world's treasure of knowledge and at the same time, disseminates this knowledge within the country’s borders. The University works in co-operation with various economic institutions in both the public and private sectors, with the government and local authorities as well as other civil institutions. In this way it encourages the harnessing and application of its research and educational achievements and contributes to social development.

The University of Ljubljana has a consolidating role in the academic community of professors, researchers, students and other associates, and strives to establish a fine reputation both at home and around the world. According to its statute, the research, education, public activities and relations among its members is carried out based on the following principles:

The University of Ljubljana houses the permanent seat of the International Association for Political Science Students (IAPSS), an international academic group consisting of 10,000 political science graduate and undergraduate students worldwide.

Since its foundation in 1919, the University of Ljubljana has employed several prominent faculty. Its alumni have formed the elite in the economic, political, social and cultural spheres in Slovenia.