University of National and World Economy

The University of National and World Economy (Bulgarian: Университет за национално и световно стопанство) is a university located in Sofia, Bulgaria. It was formerly known as the Karl Marx Higher Institute of Economics.

University of National and World Economy (UNWE) is one of the biggest and oldest higher educational institutions of economics in the Republic of Bulgaria and South Eastern Europe with a history of more than 95 years.[2] It was co-founded by Stefan Bobchev and the Russian emigre Peter Bogaevsky. 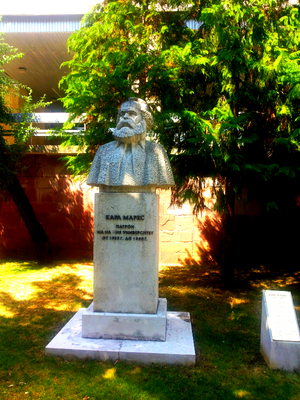 Monument of Karl Marx in UNWE

The autonomy of the higher school was regained during Communist period in Bulgaria in 1952 under the name Higher Institute of Economics (HIE). In 1953 the institute was named after Karl Marx.

After the democratic changes in Bulgaria, the Academic Board (AB) passed a resolution renaming the Karl Marx Higher Institute of Economics into the University of National and World Economy (On 27 April 1990 ). Officially this was done with an act of the National Assembly of the Republic of Bulgaria on the establishment and transformation of higher educational institutions (26 July 1995).

Prof. Statty Stattev is the current rector of the university, elected in December 2011.[3]

UNWE is a leading and coordinating university for Bulgaria in the Central European Initiative for university networking.[4] Development of programmes providing mobility for students and academic staff (in the form of seminars, summer school or a master's degree programme) is in its initial stage. Application for funded joint education is done on the basis of already established contacts with universities from CEI member states whenever students and academic staff are in another foreign university. 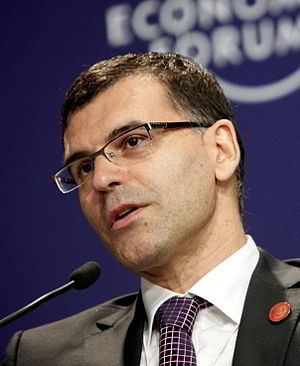 Simeon Djankov is a Bulgarian economist. In 1989, he passed the entrance exam to the UNWE with the highest national scores. From 2009 to 2013, he was the Deputy Prime Minister and Minister of Finance of Bulgaria in the government of Boyko Borisov. Also he was a Chief economist of the finance and private sector vice-presidency of the World Bank

University of National and World Economy is the eldest, the most prestigious and the largest University of Economics in Southeast Europe, a leader in Bulgarian higher education. In 2006 UNWE was given the highest institutional evaluation among all Bulgarian universities by the National Agency for Assessment and Accreditation, in 2007 the professional field of Economics and in 2008 the professional fields of Administration and Management also received the highest estimate that has been given so far in Bulgaria.

UNWE is the first in the rankings of Bulgarian and foreign universities with economic concentration. The University took the 1st place in Bulgaria, 28nd place in Europe and 64th in the world ranking of business universities worldwide worked out from the Supreme consortium of 126 research centers and institutes under the Ministry of Education of Spain.[5] The Consortium is the largest research organization, which makes global ranking of the universities from all over the world. University of National and World Economy is the absolute leader among students in the professional fields of Economics, Administration and Management. By this criteria, according to the ranking system of the Ministry of Education and Science and the Open Society Institute, UNWE is № 1. 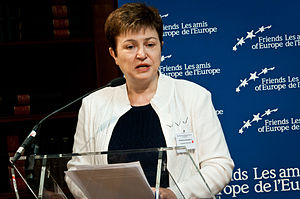 Kristalina Georgieva is a Bulgarian economist and administrator, currently serving as European Commissioner for Budget and Human Resources in the college of the Juncker Commission.PhD in Economics and an MA in Political Economy and Sociology from the University of National and World Economy in Sofia, Bulgaria.

Traditionally, the highest number of applicants as well as a record number of A students study at UNWE in comparison to other universities in the country. For admission at the university since 2007 there is a unified exam (test) similar to the SAT test and since 2008 it is under the professional fields.

The University ranks first in Bulgaria by the realization of its graduates and the majority of them hold extremely favorable positions in the labor market. State and private employers adopt UNWE as a synonymous with excellent training and professionalism of its graduates. It is not a coincidence that UNWE is known as Bulgarian Harvard – the university where state, political and business elite of Bulgaria is trained. Only in the recent few years among its graduates there are four prime ministers, vice prime ministers, ministers, a president of the National Assembly, many deputies, a President of the National Audit Office, a chief prosecutor, a lot of bankers, businessmen and many others. 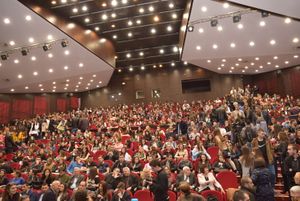 Under regular and distance form of education are trained more than 20,000 students at UNWE. There are 39 majors for bachelor's degree (in four of them – Economics, International Economic Relationships, Finance and Accounting, Business Informatics – the education is only in English) as well as over 40 graduate programs.

The University has been awarded the Certificate of quality in education according to ISO 9001:2000.

UNWE is the coordinating university for Bulgaria in the Central European initiative for inter-university relationships and it is in collaboration with over 100 universities of US, Europe and Asia.

The university issues an almanac, a yearbook and "Scientific Works", the scientific magazine "Economic Alternatives" and the "UNWE newspaper" . The material facilities have been completely renovated in the recent years. 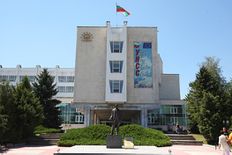 The building of UNWE is a 41 thousand square meters built up area and there are 120 auditoriums, a lot of computer rooms, offices, laboratories, 367 study rooms, a modern library with 100 computer workstations and free Internet access, a ceremonial hall, some modern conference rooms, an electronic system of information services for students, a publishing house, a printing house, a bookshop, a website, a sports center, dormitories for nearly 5000 students, health – educational facility in Ravda and many others.

UNWE has 8 faculties and 32 departments.

At UNWE there are: