The University of Niš (Serbian: Универзитет у Нишу / Univerzitet u Nišu) is a university in Niš, Serbia. It was founded in 1965 and it consists of 13 faculties with 1500 teachers, 630 staff and extracurricular staff, and around 30,000 students. Since its foundation the university diploma has been acquired by more than 50,000 students, including 1,300 foreigners.

It has a university library "Nikola Tesla"; the Faculty of Technology is in Leskovac and the Teacher-Training Faculty is in Vranje. 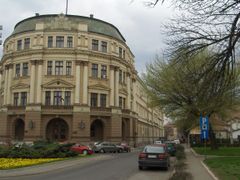 The University of Niš was incorporated as an independent degree-granting institution on June 15, 1965.

Its establishment rounded off an important, in many ways pioneering, period in the more recent history of the town which started in 1960 when the first undergraduate programs commenced in Niš under the academic patronage of the University of Belgrade. They were institutionalized as the faculties of Law & Economics, Medicine, and Engineering, constituting a core from which a more and more complex and richer physiognomy of the university would systematically develop, following the demands of the times.

The university started its independent life with 234 full-time teaching staff and 6,800 students. The increase of the student population, the development of new disciplines, and the rising needs of the immediate and broader industrial and social environment brought about a reorganization of the existing faculties and foundation of new ones. 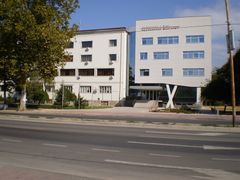 The beginning of the third millennium finds the university as a medium-sized, mature and well-developed academic community comprising thirteen academic units:

Eleven faculties are located in Niš. The Faculty of Technology is in Leskovac and the Teacher-Training Faculty is in Vranje.

Most of the mentioned faculties have a composite structure, i.e., departments, divisions or majors offering wide and diversified study and research opportunities at the undergraduate and graduate levels, including opportunities to obtain Ph.D. degrees.

So far, more than 49,000 students have graduated from the university, 2,254 have earned master's degree and 1,275 have successfully defended their doctoral dissertations. 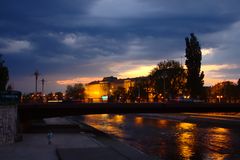 View of the University of Niš from the Nišava River

The university main offices are in one of the most representative city structures, an edifice built in the late 19th century, which was formally recognized as a cultural treasure of major significance in 1979.

The building was constructed in 1887, in the city center, at the right bank of the river Nisava, for the needs of the district authorities of that time. The monumental building bears characteristics of the neo-Renaissance style, designed by an unknown Viennese architect. During its long history, it first housed the District Court, the District Government and the military headquarters and then, from July 26, 1914 to October 16, 1915, when Niš was the Serbian war capital, the building was the seat of the Serbian government and its Ministry of the Interior. The formal declaration of war was directed from Austria-Hungary on July 28, 1914 to this building.

In 1930, the building became the administrative seat of the Morava County, after the World War II it housed the District Administration, while in 1967 it was assigned to the permanent use to the University of Nis.

In 2008, marking the 120th anniversary of its building, the University of Niš completed adaptation and construction work to enable access for persons with disabilities to all university facilities.