From Infogalactic: the planetary knowledge core
(Redirected from University of Plymouth)
Jump to: navigation, search
This article is about the university in England. For the school in New Hampshire, USA, see Plymouth State University.

Plymouth University is a public university based predominantly in Plymouth, England where the main campus is located, but the university has campuses and affiliated colleges all over South West England. With 25,895 students, it is the 22nd largest in the United Kingdom by total number of students (including the Open University). It has 2,820 staff.[5]

The university was originally a Polytechnic Institute, with its constituent bodies being Plymouth Polytechnic, Rolle College, the Exeter College of Art and Design (which were, before April 1989, run by Devon County Council) and Seale-Hayne College (which before April 1989 was an independent charity). It was renamed Polytechnic South West in 1989 and remained as this until gaining university status in 1992 along with the other polytechnics. The new university absorbed the Plymouth School of Maritime Studies.

In 2006 part of the remains of the World War II Portland Square air-raid shelter were rediscovered on the Plymouth campus.[9] On the night of 22 April 1941, during the Blitz, a bomb fell here killing over 70 civilians, including a mother and her six children.[9] The bomb blast was so violent that human remains were found in the tops of trees. Only three people escaped alive, all children.

The university's first Vice-Chancellor was John Bull. He was succeeded by Roland Levinsky until his death on 1 January 2007, when he walked into live electrical cables brought down during a storm.[10] He was temporarily replaced by Mark Cleary (now VC of the University of Bradford),[11] and then by Steve Newstead. Wendy Purcell became VC on 1 December 2007. She was placed on leave on 2 July 2014 by the University's governors while an internal review is conducted.[12] A month later the Higher Education Funding Council for England requested an independent external review of the university's governance.[13]

The university was selected by the Royal Statistical Society in October 2008 to be the home of its Centre for Statistical Education.[14] It also runs courses in maritime business, marine engineering, marine biology,[15] and Earth, ocean & environmental sciences.

In August 2014, the university was instructed by HEFCE to undertake an external review of its governance after vice-chancellor, Wendy Purcell was placed on leave.[16]

When university status was gained in 1992, the university was based in various locations. Under Vice-Chancellor Levinsky the university began a policy of centralising its campus activities in Plymouth.

The Exmouth campus – Rolle College – housed the Faculty of Education and relocated to the new Rolle Building in August 2008. The decision was unpopular with students and the town of Exmouth itself, there were several protest marches and a campaign to keep the campus open.[17]

Recently completed developments include Portland Square, a library extension, refurbished and new laboratory and teaching facilities in many of the campus buildings, halls of residence near the Business School and a new £16 million Peninsula Medical School headquarters at Derriford, in the north of the city.[18] A new maritime centre has been constructed behind the Babbage Building to house civil engineering, coastal engineering and marine sciences.

An exception to the trend of centralising activities are the university's extensive activities in education for the health professions. In addition many of its students are taught at Further Education Colleges throughout Devon, Cornwall and Somerset, such as South Devon College. A new building which opened in 2008 is shared between the Peninsula Medical School and the Faculty of Health, Education and Society. 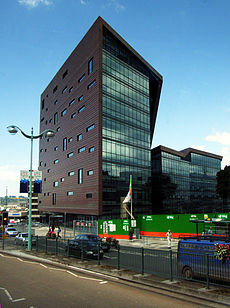 The Roland Levinsky Building, designed by architects Henning Larsen with Building Design Partnership, is clad with copper sheets in a seamed-cladding technique, is nine storeys high and has 13,000 square metres (140,000 sq ft) of floor space.[19] The Faculty of Arts, previously based in Exmouth and Exeter moved here in August 2007. The building contains two large lecture theatres, the Jill Craigie Cinema, used by the film students to display their films and for showing of films to the public; three performance rehearsal studios; digital media suites; and a public art gallery which displays work by local artists groups, students and famous artists.

University-managed accommodation in the first year of study is guaranteed for all applicants who choose Plymouth as their first choice institution.[20]The university provides an approved accommodation database, which is available to all continuing students. Special accommodation arrangements can be made for students with disabilities or medical conditions.

Plymouth is a modern university that has undergone a great deal of development, including several new buildings.

The books represent the university’s focus on learning and scholarship. The scattering of small stars, represent navigation, which has played a key role in the history of the city and the university. The scallop shells in gold, represents pilgrimage, a sign of the importance of the departure of the Pilgrim Fathers from a site near the Mayflower Steps in the Barbican aboard the Mayflower in 1620. A Pelican and a Golden Hind support the shield and reflect both the original and later, better known, name of Sir Francis Drake’s ship. The crest contains the Latin motto, "Indagate Fingite Invenite" which translates as "Explore Dream Discover" and is a quote from Mark Twain, reflecting the university's ambitions for its students and Plymouth's history of great seafarers.

The Letters Patent granting Arms to the University of Plymouth were presented by Eric Dancer, Lord Lieutenant of Devon, in a ceremony on 27 November 2008, in the presence of Henry Paston-Bedingfeld, York Herald of the College of Arms, the Lord Mayor and Lady Mayoress of Plymouth, Judge William Taylor, the Recorder of Plymouth, and Baroness Judith Wilcox.[22]

The Coat of Arms are rarely seen in use, other than at graduation. The university tends to use the modern globe logo on stationery and signs and is very keen to keep the Coat of Arms exclusive. The use of the arms is therefore restricted to graduations and other formal ceremonies, degree certificates and associated materials and the exclusive use by the Office of the Vice-Chancellor.[citation needed] 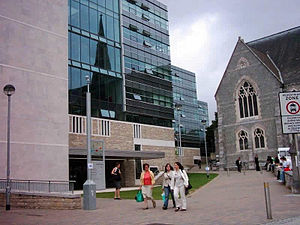 A wide variety of undergraduate and postgraduate programmes are taught at the main city campus in Plymouth. The university scores well in law, psychology, geographical sciences, computing (including digital media) and computer science, fine art and art history.[23] Key developments include: the creation of a new Business School; bringing together complementary subjects in a new combined faculty of Science and Technology; and creating the largest Marine Science and Engineering School in Europe.[citation needed]

This faculty is host to the School of Architecture, Design and Environment, School of Art & Media, the School of Humanities and Performing Arts, and the Plymouth Institute of Education. Arts subjects are usually taught in the Roland Levinsky building and the Scott building, a 19th-century building located next to Roland Levinsky which was modernised externally in 2008 to keep to the university's current design. The faculty offers degrees in Architecture, English, History, Art History, 3D Design, Fine Art, Music, Photography, Media Arts, Theatre & Performance and Dance Theatre. Advanced research is available across the disciplines in all three Schools, including via the innovative international Planetary Collegium in new media art.

Faculty of Health and Human Sciences

Faculty of Science and Engineering

The university provides professional diving qualifications on a number of its courses, the only university in the country to do so. The university's diving centre is located within its Marine Station teaching and research facility based next to Queen Anne's Battery Marina, and has a full-time team of instructors and dedicated boats and equipment.[citation needed]

In October 2005, The Sun newspaper voted the university as having the most bizarre degree course in the country, the BSc (Hons) in Surf Science & Technology. Commonly known as "surfing", this course is actually centred on coastal/ocean sciences, surfing equipment/clothing design and surfing-related business, which has its popularity increased by the geographical location of the university.

The university has strong links with the cruising industry, offering courses in the Maritime and Cruising sector. The school offers BSc (Hons) in Cruise Management, where students can opt to take a year out to work with P&O or Princess Cruises for a period of two, four-month periods.[24]

The Academic Partnerships network is a collaboration between the university and local colleges across the South West and South of the country, from Penzance to Jersey. There are hundreds of higher education courses available providing opportunities for progression to other qualifications. For example, someone who has spent two years studying for a foundation degree at their local college – and who has successfully passed their exams – can move on to the final year of a full honours degree at the university.

Centres for Excellence in Teaching and Learning

In 2005 the university was awarded four HEFCE funded Centres for Excellence in Teaching and Learning (CETLs). In addition, Plymouth was a partner in a fifth successful bid, led by Liverpool Hope University.[citation needed] The university's CETLs are:

The results of the 2014 Research Excellence Framework showed that, overall, Plymouth was ranked joint 66 of 128 UK institutions, rising 9 places from the previous Research Assessment Exercise in 2008.[35] Across all assessed subject areas Plymouth showed substantial evidence of 3* (internationally excellent) and 4* (world leading) research, and this was particularly evident in Clinical Medicine, Computer Sciences & Informatics, Psychology, Psychiatry & Neuroscience, and Earth Systems & Environmental Sciences, where 79-85% of research was ranked as 3* or 4*.[36]

See also: Category:Academics of the University of Plymouth

Staff include political scientists Colin Rallings and Michael Thrasher, who have written extensively on electoral systems, voting behaviour, polling results and British politics and have regularly appeared on national television election programmes for both the BBC and ITV. Other notable academics include Roy Lowry[37] who, in August 2006, broke the world record for launching the most rockets at once;[38] Iain Stewart who has fronted BBC documentaries such as Journeys into the Ring of Fire and Journeys from the Centre of the Earth; Alexis Kirke an internationally-known interdisciplinary performer and artist; Angela Smith who has published several celebrated works on the subject of gender and 20th Century warfare; choreographer Adam Benjamin, co-founder of Candoco Dance Company; and sociologist John Scott, a leading expert on elites, power, social stratification, and social network analysis.

See also: Category:Alumni of the University of Plymouth

The Plymouth University Students' Union, usually abbreviated "UPSU" is a non-profit making organisation. Each year, students elect the officers who will represent them for the following year. The Union offers a range of services and stages a number of events throughout the year. As well as events, the Union is the base for most of the sports teams and societies at the university.

The Students' Union has a garden that has been set up by the Centre for Sustainable Futures (CSF) which the students can use.