The University of Sarajevo (Bosnian, Croatian and Serbian: Univerzitet u Sarajevu / Универзитет у Сарајеву) is the largest and oldest university in Bosnia and Herzegovina, and is the oldest institution of tertiary education in the ex-Yugoslav states.[1][2] It was originally established in 1531 as an Ottoman Islamic law college; the university in its modern, secular incarnation being established and effectively added to that in 1949.[3] Today, with 20 faculties, three academies and three faculties of theology and with 30,866 enrolled students as of school year 2014/15, it ranks among the largest universities in the Balkans in terms of enrollment. Since opening its doors in 1949, 122,000 students received bachelor's degrees, 3,891 received master's degrees and 2,284 received doctorate degrees in 45 different fields.[4]

It is now widely regarded as the most prestigious university in Bosnia and Herzegovina,[citation needed] and employs more than one thousand faculty members. 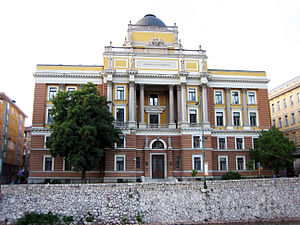 The University of Sarajevo Faculty of Law building, built in the 1850s.

The original establishment of the University of Sarajevo dates back to the 16th century, as an Ottoman institute of higher education. It was called the Ottoman Madrasah of Sarajevo, a religious school teaching Islamic Law, i.e. Sharia Law and was recognized as a university in the confines of the Ottoman Empire, and the Islamic world. It co-existed at the time with several similar institutions (religious schools) held in Orthodox Christian and Catholic monasteries in Bosnia. In the Middle Ages, those were the only kind of educational institutions in Europe. Due to Bosnia's relative stagnation under much later Ottoman rule, the Ottoman Madrasah of Sarajevo lost this status in the late 19th century upon the country's annexation to the Austro-Hungarian Empire, effectively ceasing most education duties until 1949 when the modern University of Sarajevo was established.

In 1949, the Engineering Faculty was opened. On 2 December of that year with the appointment of the first rector, the University of Sarajevo was established. With the opening of the Faculty of Philosophy (1950) and the Faculty of Economics (1952) the initial phase of establishment of the Sarajevo University was completed.

The second phase of development (1955–69) was characterized by the affirmation of the university, the opening of new institutions of higher education and the relative satisfaction of the needs for highly educated personnel in Bosnia and Herzegovina. Another significant achievement is the organization and initiation of postgraduate studies at the university.

The third phase (1970–82) was defined by more institutions of higher education being opened at the university, a scientific promotion of the university and its intensified involvement and promotion on the international academic plane. The university contributed directly and indirectly to the establishment of new universities in Banja Luka, Mostar and Tuzla.

The fourth phase (1982–92) was characterized by the separation of scientific activities from the university and the formation of favored scientific institutes outside it. This brought considerable damage to the University of Sarajevo, because the coherence of university education and scientific research was endangered. This resulted in a lower quality of education and a technological stagnation of the university. The uncontrolled enrollment of an enormous number of students resulted in a significantly lower efficiency of studies and a hyper-production of personnel in certain areas of education.

The fifth phase (1992–95) was marked by devastation of the facilities and equipment of the university, caused by the war in Bosnia and Herzegovina and the Siege of Sarajevo.

Despite all of these difficulties of life and work during the four-year siege of Sarajevo, because of the help and the enthusiasm, professionalism, patriotism and perseverance of university teachers and associates as well as the students, the University of Sarajevo managed to retain its continuity of work and life. This was a specific aspect of intellectual academic resistance against everything that is barbaric and uncivilized. It represented the university's contribution to the affirmation of freedom and democracy, the outcry against the war and aggression and the affirmation of the sovereignty of Bosnia and Herzegovina.

At the beginning of 1996 the University of Sarajevo entered the phase of post-war physical and academic renewal and reconstruction. The physical renewal is aimed at the reconstruction and the rebuilding of destroyed facilities (through the realization of the New University Campus Project), the replacement of destroyed educational and scientific equipment and the reconstruction of student dormitories. Significant results have been achieved on this plane and the conditions for higher quality studies have been formed in certain areas. However, despite the numerous reconstruction projects the University of Sarajevo still hasn't reached the full prewar potential. The quality and number of student dormitories are still far below the required, technology is mostly outdated, and since the working conditions could be much better academic staff is also lacking. In addition, the war caused a rift even among the academics and many who worked at the university before the war didn't continue after. The quality of studies is slowly improving, partly because of the Bologna Process implementation, but there is still hyper-production in some areas of education since the Bosnia and Herzegovina doesn't have a unified program of higher education (one could say that it has as many as 11 programs, each implementing Bologna Accord in its own manner)

The process of renewal and reconstruction of the university is supported by the activities of the European University Association, the European Council, the European Union as well as a whole line of international organizations and institutions involved in the field of higher education.

The University of Sarajevo enjoys partnerships with over 120 universities in Europe, the USA, Canada, and the Middle East. [5]

The main objective of all the university's current activities is to raise the quality of studies, to create a contemporary university of European origins, which will be a respectable representative of Bosnia and Herzegovina on the international level and a promoter of the traditional, historical, cultural, scientific and artistic values of the country, and Southeastern Europe. 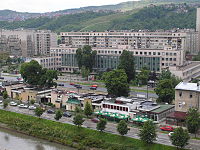 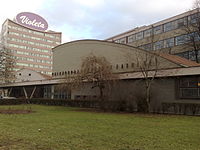 Faculty of natural science and mathematics 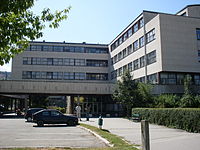 The University comprises 31 faculties, academies and colleges, further subdivided into 6 academic groups, and an additional number of other programs: