From Infogalactic: the planetary knowledge core
Jump to: navigation, search
For other universities that use the UT mnemonic, see UT. 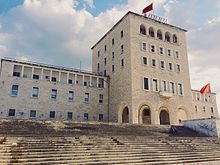 The University of Tirana (UT) (Albanian: Universiteti i Tiranës) is a public university located in Tirana, Albania.

UT was founded in 1957 as the State University of Tirana (Universiteti Shtetëror i Tiranës) through the merging of five existing institutes of higher education, the most important of which was the Institute of Sciences, founded in 1947. Between April 13, 1985 and 1992 (during the communist regime), UT was called the Enver Hoxha University of Tirana (Universiteti i Tiranës "Enver Hoxha").

UT is the largest and highest ranking university in Albania.[3] It includes eight colleges, 50 academic departments, and 41 study programs or majors. Most programs are offered in Tirana; a few smaller affiliated campuses are located in other Albanian cities, including Saranda in the south and Kukës in the north.

UT offers three-year Bachelor, one- or two-year Master, and three- to five-year doctorate degree programs, in accordance with the Bologna system.

The current campus is urban and decentralized. A new large and centralized campus has been planned in the southeast periphery of Tirana.[4] Students dorms are grouped in a separate location called Student City (Qyteti Studenti) in southeast Tirana.[5]

UT is the biggest college in Albania and the Balkans, and among the biggest in Europe with 35 000 students. In 2013 the college accepted 95 new Ph.D. students. These are students in possession of bachelor's degrees.