The University of Zagreb (Croatian: Sveučilište u Zagrebu, pronounced [sʋeǔt͡ʃiliːʃte u zǎːgrebu]; Latin: Universitas Studiorum Zagrabiensis) is the largest Croatian university and the oldest continuously operating university in the area covering Central Europe south of Vienna and all of Southeastern Europe.[2]

History of the University began on September 23, 1669 when the Holy Roman Emperor Leopold I issued a decree granting the establishment of the Jesuit Academy of the Royal Free City of Zagreb. Decree was accepted at the Council of the Croatian Kingdom on November 3, 1671. The Academy was run by the Jesuits for more than a century until the order was dissolved by Pope Clement XIV in 1773. In 1776 Empress Maria Theresa issued a decree founding the Royal Academy of Science which succeeded the previous Jesuit Academy. Bishop Josip Juraj Strossmayer proposed to the Croatian Parliament in 1861 founding of a University. Emperor Franz Joseph signed the decree on the establishment of the University of Zagreb in 1869. Act of Founding was passed by the Parliament in 1874, and was ratified by the Emperor on January 5, 1874. On October 19, 1874, a Royal University of Franz Joseph I was official opened.

University comprises 29 faculties, 3 art academies and 1 university center with more than 70.000 students. University is as of 2015 at a 551 place out of 1000 on the list of Universities of the world made by the Center for University World Rankings.[3] 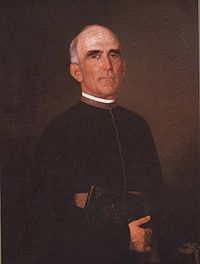 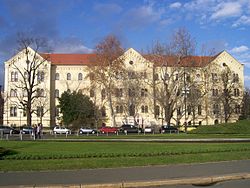 Palace of Rectorate and the Faculty of Law 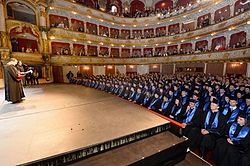 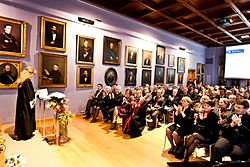 Great Hall of the Rectorate of the University

The beginnings of the later university date back to 23 September 1669 when Emperor and King Leopold I Habsburg issued a decree granting the establishment of the Jesuit Academy of the Royal Free City of Zagreb.[4] According to that document the study of philosophy in Zagreb acquired a formal and legal status as Neoacademia Zagrabiensis and officially became a public institution of higher education.

The academy was run by the Jesuits for more than a century until the order was dissolved by Pope Clement XIV in 1773. Under a new leadership in 1772 the academy enrolled a total of 200 students.

In 1776 Empress and Queen Maria Theresa issued a decree founding the Royal Academy of Science (Latin: Regia Scientiarum Academia).[4] It consisted of three studies or faculties of philosophy, theology, and law. The former political-cameral studies became part of the newly established faculty of law, and thus were integrated into the academy. Each of the faculties of the Royal Academy of Sciences had several chairs teaching one or several courses.

The academy in Zagreb remained until 1874, despite numerous organizational changes, the focal institution of higher education in Croatia, educating most of the members of the Croatian intelligentsia.

Bishop Josip Juraj Strossmayer in 1861 proposed to the Croatian Parliament the founding of a university at Zagreb. During his visit in 1869, the Emperor Franz Joseph signed the decree on the establishment of the University of Zagreb. Five years later, the Parliament passed the Act of Founding, which was ratified by the Emperor on 5 January 1874. On 19 October 1874, a ceremony was held in the name of the founding of the Royal University of Franz Joseph I in Zagreb,[5] making it the third university in the Hungarian realm of the Austro-Hungarian Empire.[6]

In 1874 the University had four faculties:

The Faculty of Medicine was not put into function in 1874; it had to wait until 1917. The Faculty of Philosophy served as the general scientific faculty. Since 1876 it had geology, botany, physics, mathematics, and chemistry; since 1877 zoology; since 1882 pharmacy; since 1883 geography.

In the Faculty of Philosophy, major reorganization ensued in the 1920s, as mathematics, pharmacy and other sciences started to split off, first with the creation of separate mathematics and pharmaceutical departments in 1928, when the faculty was renamed into its current name Filozofski fakultet.

In 1926, the university was composed of seven faculties:

During the Independent State of Croatia (1941–1945), the university was known as the Croatian University (Hrvatsko sveučilište).

The individual departments of the Faculty of Philosophy became separate faculties in 1942, 1946 when the Faculty of Sciences was formed, and finally in 1963.

In 1956, the Faculty of Technology was divided into four faculties:

These eventually split up into the current layout.

University bodies are in control of University of Zagreb as they make decisions and may establish the expert and advisory bodies which could help in carrying out University tasks.

In July 2012 the Municipal Court in Varaždin found that the Faculty of Organization and Informatics discriminated and harassed Kresic on the grounds of sexual orientation and the Court ordered the Faculty of Organization and Informatics to refrain from any actions that would prevent Kresic from career and academic advancement.[11] This case was the first lawsuit of its kind in Croatia.