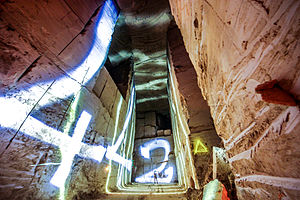 Light painting inside an abandoned limestone quarry in France.

Urban exploration (often shortened as urbex or UE) is the exploration of man-made structures, usually abandoned ruins or not usually seen components of the man-made environment. Photography and historical interest/documentation are heavily featured in the hobby and, although it may sometimes involve trespassing onto private property, this is not always the case.[1] Urban exploration is also commonly referred to as infiltration, although some people consider infiltration to be more closely associated with the exploration of active or inhabited sites. It may also be referred to as draining (when exploring drains), urban spelunking, urban rock climbing, urban caving, or building hacking.

The nature of this activity presents various risks, including both physical danger and the possibility of arrest and punishment. Some activities associated with urban exploration may violate local or regional laws and certain broadly interpreted anti-terrorism laws or be considered trespassing or invasion of privacy.[2] 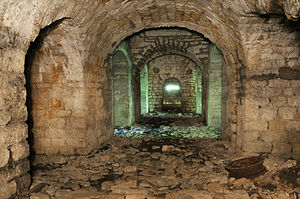 Ventures into abandoned structures are perhaps the most common example of urban exploration. At times, sites are entered first by locals and may suffer from large amounts of graffiti and other acts of vandalism. Although targets of exploration vary from one country to another, high-profile abandonments include amusement parks, grain elevators, factories, power plants, missile silos, fallout shelters, hospitals, asylums, schools, poor houses, and sanatoriums.

In Japan, abandoned infrastructure is known as haikyo (廃虚?) (literally "ruins"), but the term is synonymous with the practice of urban exploration.[3] Haikyo are particularly common in Japan because of its rapid industrialization (e.g., Hashima Island), damage during World War II, the 1980s real estate bubble, and the 2011 Tōhoku earthquake and tsunami.[4]

Many explorers find decay of uninhabited space to be profoundly beautiful, and some are also proficient freelance photographers who document what they see, as is the case with those who document some of the infrastructure of the former USSR.[5]

Another aspect of urban exploration is the practice of exploring active or in use buildings which includes gaining access to secured or "member-only" areas, mechanical rooms, roofs, elevator rooms, abandoned floors and other normally unseen parts of working buildings. The term "infiltration" is often associated with the exploration of active structures. People entering restricted areas may be committing trespass and civil prosecution may result.

Catacombs such as those found in Paris,[6] Rome, Odessa and Naples have been investigated by urban explorers. The Mines of Paris, comprising much of the underground tunnels that are not open to public tourism like the catacombs, have been considered the "Holy Grail" by some due to their extensive nature and history. Explorers of these are known as cataphiles.

Entry into storm drains, or "draining", is another common form of urban exploration. Groups devoted to the task have arisen, such as the Cave Clan in Australia. Draining has a specialized set of guidelines, the foremost of which is "When it rains, no drains!" The dangers of becoming entrapped, washed away, or killed increase dramatically during a heavy rainfall.

A small subset of explorers enter sanitary sewers. Sometimes they are the only connection to caves or other subterranean features. Sewers are among the most dangerous locations to explore owing to risk of poisoning by buildups of toxic gas (commonly methane and hydrogen sulfide). There have been numerous fatalities around the world[citation needed] where people are overcome by toxic gas from sewers.

Exploring active and abandoned subway and underground railway tunnels, bores and stations is often considered to be trespassing and can result in civil prosecution. As a result, this type of exploration is rarely publicized. One important exception to this is the abandoned subway of Rochester, New York, the only American city to have an abandoned, formerly used, subway system. (The Cincinnati subway is also abandoned, but was never completed.) 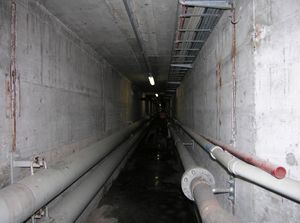 Utility tunnel in the center of Zurich, Switzerland

Universities, and other large institutions such as hospitals, often distribute hazardous superheated steam for heating or cooling buildings from a central heating plant. These pipes are generally run through utility tunnels, which are often intended to be accessible solely for the purposes of maintenance. Nevertheless, many of these steam tunnels, especially those on college campuses, often also have a tradition of exploration by students. This practice was once called "vadding" at the Massachusetts Institute of Technology, though students there now refer to it as roof and tunnel hacking.

Some steam tunnels have dirt floors, poor lighting and temperatures upwards of 45 °C (113 °F). Others have concrete floors, bright light, and more moderate temperatures. Most steam tunnels have large intake fans to bring in fresh air and push the hot air out the back, and these fans may start without warning. Most active steam tunnels do not contain airborne asbestos, but proper breathing protection may be required for other respiratory hazards. Experienced explorers are very cautious inside active utility tunnels, since pipes can spew boiling hot water or steam from leaky valves or pressure relief blowoffs. Frequently there are puddles of muddy water on the floor, making slips and falls a special concern near hot pipes.

Steam tunnels have generally been secured more heavily in recent years, due to their frequent use for carrying communications network backbone cables, increased safety and liability concerns, and perceived risk of their use in terrorist activities.

The rise in the popularity of urban exploration can be attributed to its increased media attention. Recent television shows, such as Urban Explorers on the Discovery Channel, MTV's Fear, and the Ghost Hunting exploits of The Atlantic Paranormal Society have packaged the hobby for a popular audience. The fictional film After... (2006), a hallucinatory thriller set in Moscow's underground subways, features urban explorers caught up in extreme situations. Talks and exhibits on urban exploration have appeared at the fifth and sixth Hackers on Planet Earth Conference, complementing numerous newspaper articles and interviews.

Another source of popular information is Cities of the Underworld, a documentary series which ran for three seasons on the History Channel, starting in 2007. This series roamed around the world, showing little-known underground structures in remote locales, as well as right under the feet of densely packed city-dwellers.

With the rise in the relative popularity of the hobby due to this increased focus, there has been increasing discussion on whether the extra attention has been beneficial to urban exploration as a whole. The unspoken rule of urban exploring is "take nothing but photographs, leave nothing but footprints", but because of the rising popularity, many individuals who may have other intentions are creating a concern among many property owners.

Several writers on urbex have discussed the personal meaning of such acts of "infiltration" — or "invasions". Simon Cornwell, in his discussions of the Cane Hill Cult (in Croydon, South London), has emphasized the element of danger in recording the experiences — physically, emotionally and photographically.[citation needed] 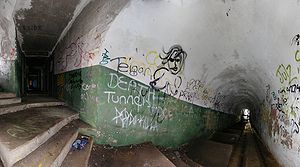 Hill 60 bunker. On the right is a corridor leading to the bunker complex and on the left is the mushroom tunnel.

Urban exploration is a hobby that comes with a number of inherent dangers. For example, storm drains are not designed with human access as their primary use. They can be subject to flash flooding and bad air. There have been a number of deaths in storm water drains, but these are usually during floods, and the victims are normally not urban explorers.[7]

Many old abandoned structures feature hazards such as unstable structures, unsafe floors, broken glass, the presence of unknown chemicals and other harmful substances (most notably asbestos), stray voltage, and entrapment hazards. Other risks include freely roaming guard dogs and hostile squatters. Some abandoned locations may be heavily guarded with motion detectors and active security patrols. Others are more easily accessible and carry less risk of discovery.[8]

Asbestos is a long-term health risk for urban explorers, along with breathing in contaminants from dried bird feces, which can cause a condition known as pigeon-breeder's lung, a form of hypersensitivity pneumonitis. Urban explorers may use dust masks and respirators to alleviate this danger. Some sites are occasionally used by substance abusers for either recreation or waste disposal, and there may be used or infected syringe needles en route, such as those commonly used with heroin.

The growing popularity of the activity has resulted not just in increased attention from explorers, but also from vandals and law enforcement. The illicit aspects of urban exploring, which may include trespassing and breaking and entering,[9] have brought along with them critical articles in mainstream newspapers.[10]

In Australia, the website of the Sydney Cave Clan was shut down by lawyers for the Roads and Traffic Authority of New South Wales, after they raised concerns that the portal could "risk human safety and threaten the security of its infrastructure".[10] Another website belonging to the Bangor Explorers Guild was criticized by the Maine State Police for potentially encouraging behavior that "could get someone hurt or killed."[10] Likewise, the Toronto Transit Commission has also used the Internet to crimp subway tunnel explorations, going as far as to send investigators to various explorers' homes.[10]

Jeff Chapman, who authored Infiltration, stated that genuine urban explorers "never vandalize, steal or damage anything". The thrill comes from that of "discovery and a few nice pictures".[10] Some explorers will also request permission for entry in advance.[11]

Many urban explorers adhere to the philosophy of cave explorers and outdoors hikers: "Take nothing but pictures. Leave nothing but footprints."[12] Some are photographers who specialize in documenting urban ruins and scenes of industrial decay. Professional photographers working in this field include Seph Lawless, Julia Solis, Andrew L. Moore, and Brandon P. Davis,[13] Other well-known photographers, such as Jan Saudek, use the interiors of abandoned buildings as backdrops for their figurative and portrait works.

Urban exploration is featured in a number of works, in a variety of media, such as: