From Infogalactic: the planetary knowledge core
(Redirected from Valencian language)
Jump to: navigation, search
This article is about the language variety. For other uses, see Valencian (disambiguation).

Valencian belongs to the Western group of Catalan dialects.[2] Under the Valencian Statute of Autonomy, the Valencian Academy of the Language (Acadèmia Valenciana de la Llengua, AVL) has been established as its regulator. The AVL considers Catalan and Valencian to be simply two names for the same language.[5]

Some of the most important works of Valencian literature experienced a golden age during the Late Middle Ages and the Renaissance. Important works include Joanot Martorell's chivalric romance Tirant lo Blanch, and Ausiàs March's poetry. The first book produced with movable type in the Iberian Peninsula was printed in the Valencian variety.[6][7]

The official status of Valencian is regulated by the Spanish Constitution and the Valencian Statute of Autonomy, together with the Law of Use and Education of Valencian.

Article 6 of the Valencian Statute of Autonomy sets the legal status of Valencian, providing that:[8]

The Law of Use and Education of Valencian develops this frame work, providing for implementation of a bilingual educational system, and regulating the use of Valencian in the public administration and judiciary system, where citizens can freely use it when acting before both.

Valencian is not one of the recognized languages of the European Union (24 official and 26 minority languages).[citation needed]

Valencian is not spoken all over the Valencian Community. Roughly a quarter of its territory, equivalent to 10% of the population (its inland part and areas in the extreme south as well), is traditionally Castilian-speaking only, whereas Valencian is spoken to varying degrees elsewhere.

Additionally, it is also spoken by a reduced number of people in Carche, a rural area in the Region of Murcia adjoining the Valencian Community; nevertheless Valencian does not have any official recognition in this area. Although the Valencian language was an important part of the history of this zone, nowadays only about 600 people are able to speak Valencian in the area of Carche.[10] 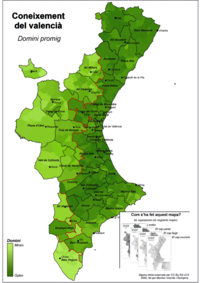 Knowledge of Valencian according to the 2001 census. Note that the light green areas inland and in the southernmost part are not historically Valencian speaking (large).

In 2010 the Generalitat Valenciana published a study, Knowledge and Social use of Valencian,[11] which included a survey sampling more than 6,600 people in the provinces of Castellón, Valencia, and Alicante. The survey simply collects the answers of respondents and did not include any testing or verification. The results were:

Valencian was the language "always, generally, or most commonly used":

The survey shows that, although Valencian is still the common language in many areas in the Valencian Community, where slightly more than half of the Valencian population are able to speak it, most Valencians do not usually speak in Valencian in their social relations. The statistics hide the fact that in the areas where the language is still strong, most people use Valencian in preference to Castilian in all everyday situations.

Moreover, according to a survey in 2008, there is a downward trend in everyday Valencian users. The lowest numbers are in the major cities of Valencia and Alicante, where the percentage of everyday speakers is in single figures. All in all, in the 1993–2006 period, the number of speakers fell by 10 per cent.[12] One of the factors cited is the increase in the numbers of immigrants from other countries, who tend to favour using Spanish over local languages; accordingly, the number of residents who claim no understanding of Valencian sharply increased. One curiosity in the heartlands mentioned above, is that most of the children of immigrants go to public school and are therefore taught in Valencian and are far more comfortable speaking this with their friends. However, some children of Valencian speakers go to private schools run by the church where the curriculum is in Castilian and consequently this becomes their preferred language.

Note that this is a list of features of the main forms of Valencian as a group of dialectal varieties that differ from those of other Catalan dialects, particularly from the Central variety of the language. For more general information on the features of Valencian, see Catalan language. Note also that there is a great deal of variety within the Valencian Community, and by no means do the features below apply to every local version.

Different spelling of words with the same etymology

Some other features, such as the use of molt de or the lack of hom or geminate l, are often given as examples of differences between Valencian varieties and other forms of the language. However, these are actually differences between colloquial and literary language and, again, may not apply to specific sub-dialects. Northern and southern variants of Valencian share more features with western Catalan (Lower Ebro river area for instance) than with central Valencian.[citation needed] Thus, some of the features listed previously do not apply to them.

The Academy of Valencian Studies (Acadèmia Valenciana de la Llengua, AVL), established by law in 1998 by the Valencian autonomous government and constituted in 2001, is in charge of dictating the official rules governing the use of Valencian.[20] Currently, the majority of people who write in Valencian use this standard.[21]

Standard Valencian is based on the standard of the Institute of Catalan Studies (Institut d'Estudis Catalans, IEC), used in Catalonia, with a few adaptations.[22] This standard roughly follows the Rules of Castellón (Normes de Castellón) from 1932,[23] a set of othographic guidelines regarded as a compromise between the essence and style of Pompeu Fabra's guidelines, but also allowing the use of Valencian idiosyncrasies. 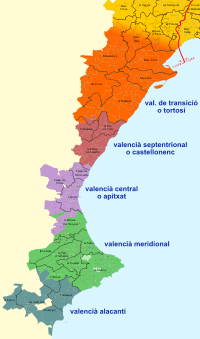 Misteri d'Elx (c. 1350). Liturgical drama. Listed as Masterpiece of the Oral and Intangible Heritage of Humanity by UNESCO.

Joanot Martorell (Gandia, 1413–1468). Knight and the author of the novel Tirant lo Blanch.

Obres e trobes en lahors de la Verge Maria (1474) The first book printed in Spain. It is the compendium of a religious poetry contest held that year in the town of Valencia.[7] 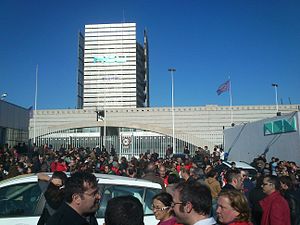 Until its dissolution on November 2013, the public-service Ràdio Televisió Valenciana (RTVV) was the main broadcaster of radio and television in Valencian language. The Generalitat Valenciana constituted it in 1984 in order to guarantee the freedom of information of the Valencian people in their own language.[24]

Prior to its dissolution, the administration of RTVV under the People's Party (PP) had been controversial due to accusations of ideological manipulation and lack of plurality. The news broadcast was accused of giving marginal coverage of the Valencia Metro derailment in 2006 and the indictment of President de la Generalitat Francisco Camps in the Gürtel scandal in 2009.[25] Supervisors appointed by the PP were accused of sexual harassment.[26]

In face of an increasing debt due to excessive expenditure by the PP, RTVV announced in 2012 a plan to shed 70% of its labour. The plan was nullified on 5 November 2013 by the National Court after trade unions appealed against it. On that same day, the President de la Generalitat Alberto Fabra (also from PP) announced RTVV would be closed, claiming that reinstating the employees was untenable.[27] On 27 November, the legislative assembly passed the dissolution of RTVV and employees organized to take control of the broadcast, starting a campaign against the PP. Nou TV's last broadcast ended abruptly when Spanish police pulled the plug at 12:19 on 29 November 2013.[28]

Having lost all revenues from advertisements and facing high costs from the termination of hundreds of contracts, critics question whether the closure of RTVV has improved the financial situation of the Generalitat, and point out to plans to benefit private-owned media.[29] Currently, the availability of media in the Valencian language is extremely limited. All the other autonomous communities in Spain, including the monolingual ones, have public-service broadcasters, with the Valencian Community being the only exception despite being the fourth most populated.

Linguists, including Valencian scholars, deal with Catalan and Valencian as the same language. The official regulating body of the language of the Valencian Community, the Valencian Academy of Language (Acadèmia Valenciana de la Llengua, AVL) declares the linguistic unity between Valencian and Catalan varieties.[30]

[T]he historical patrimonial language of the Valencian people, from a philological standpoint, is the same shared by the autonomous communinites of Catalonia and Balearic islands, and Principality of Andorra. Additionally, it is the patrimonial historical language of other territories of the ancient Crown of Aragon [...] The different varieties of these territories constitute a language, that is, a "linguistic system" [...] From this group of varieties, Valencian has the same hierarchy and dignity as any other dialectal modality of that linguistic system [...]

Valencian is classified as a Western dialect, along with the North-Western varieties spoken in Western Catalonia (Province of Lleida and most of the Province of Tarragona).[32][33] The various forms of Catalan and Valencian are mutually intelligible (ranging from 90% to 95%)[34]

The AVL, created by the Valencian parliament, is in charge of dictating the official rules governing the use of Valencian, and its standard is based on the Rules of Castellón (Normes de Castelló). Currently, everyone who writes in Valencian uses this standard, except the Royal Academy of Valencian Culture (Acadèmia de Cultura Valenciana, RACV), which uses for Valencian an independent standard.

Despite the position of the official organizations, an opinion poll carried out between 2001 and 2004[35] showed that the majority of the Valencian people consider Valencian different from Catalan. This position is promoted by people who do not use Valencian regularly.[36] Furthermore, the data indicates that younger generations educated in Valencian are much less likely to hold these views. A minority of Valencian scholars active in fields other than linguistics defends the position of the Royal Academy of Valencian Culture (Acadèmia de Cultura Valenciana, RACV), which uses for Valencian a standard independent from Catalan.[37]

This clash of opinions has sparked much controversy. For example, during the drafting of the European Constitution in 2004, the Spanish government supplied the European Union with translations of the text into Basque, Galician, Catalan, and Valencian, but the latter two were identical.[38]