From Infogalactic: the planetary knowledge core
Jump to: navigation, search
This article is about the municipality in India. For its namesake district, see Valsad district.

Valsad is a municipality in the Valsad district of the Indian state of Gujarat. Britishers called it Bulsar. This city has a collectorate, a district court, and a police headquarters with a historic prison.

Historically, Valsad was a small town covered with forest, with teak production as a major regional industry.It was a part of regional kingdom before colonial era. It was made a district during the Bombay Presidency era, and was governed under Bombay State during the colonial era, following independence (prior to the creation of the state of Gujarat).Today, Valsad is a town inhabited by Gujarati people. Gujarati is the primary language in and around the town.

The main religion followed in the region is Hinduism. Other minority religions include Jainism, Islam, Christianity, Zoroastrian, and Sikhism.

A tourist destination, the best time to visit Bulsar is in June-July, post-monsoon, when the roads in and around town are at their best.

Queen lead singer Freddie Mercury had family origins in Valsad, and his original family name (Bulsara) is derived from the former name of the city. Former Bollywood actresses Nirupa Roy and Bindu are also from Valsad. 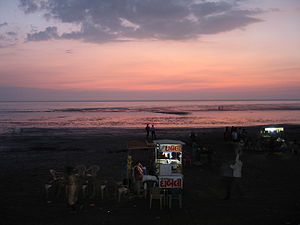 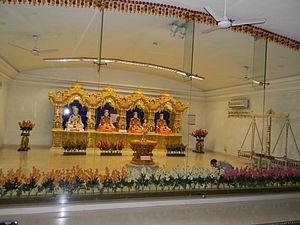 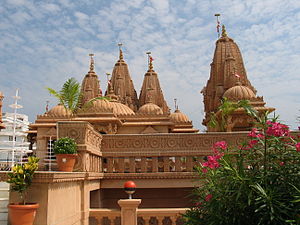 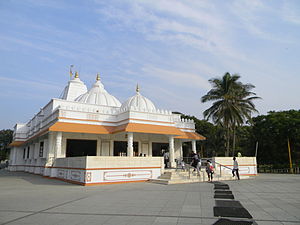 Valsad is located at Lua error in Module:Coordinates at line 668: callParserFunction: function "#coordinates" was not found..[2] It has an average elevation of 13 metres (42 feet).

The city center is about 4 km inland from the Arabian sea.[3]

Tithal Beach is a tourist attraction in the coastal region of valsad, overlooking the Arabian sea. It has many tourist attractions including some grand temples such as Shri Sai Baba and Shri Swami Narayan. The Indian government has funded in the development of the area, due to its popularity with local and foreign tourists alike. There are plenty of stalls and shops selling various wares, such as Bajiya, Dabeli, Bhel Chat Coconut water and a variety of souvenirs. You will also find places to eat both indoors and outdoors with plenty of choice from a full meal to traditionally prepared snacks. There is also a play area for children, public toilets and hotels. The road from Bulsar town to Tithal branches into two around a kilometer after crossing the Wanki river. The road to the left goes to the Sai Baba temple located along the coast of Sea to the gulf of Cambay and the road to the right goes to Tithal beach and further continues along the seashore up to Swaminarayan Temple located 1.6 km ahead along the sea coast. The temple is built in stone with exquisite hand carvings. Adjacent to the temple, there is a food outlet serving a variety of vegetarian snacks. The Shri Sai Baba Temple is adjacent to the shore of the Tithal Beach and the daily prayers are attended by many devotees from all over the world. The Shantidham Temple is also a popular religious destination being close to the sea shore, providing a good view of the Sea to the gulf of cambay.

The Alphonso mango (known locally as Haafus), for which the city and environs were once famous, is still important to the local economy. Villages in the Valsad district have numerous mango orchards, the only source of income for many villagers. The Haafus mango is very much well known for its sweet taste among mango lovers all over the world. The Haafus mango is exported to various countries of the world such as the US, the UK, Australia, Canada and also to cities throughout India. The city also has a Mango Market containing more than 300 Mango Shops which stay fully crowded at the time of Mango Season which is Indian summer — specifically April to June. Atul is a major chemical company that employs a majority of people from the town of Valsad.

Valsad has a population count of about 1,45,592 according to latest census. Valsad district is home to some popular names such as Vapi (the Chemical Hub of Gujarat), Gundlav GIDC, Killa Pardi, Umbergaon & Bhilad-Sarigam (The Industrial Estates). The union territories of Daman and Dadra & Nagar Haveli, which are important tourist destinations, are located near Valsad. This city's longitude and latitude are 72.98 and 20.54 respectively.

Morarji Desai, the former Prime Minister of India and famous Marathi playwright Ram Ganesh Gadkari were from Valsad[citation needed], as was as the Indian independence activist Bhulabhai Desai[citation needed] The ancestors of British rocker Freddie Mercury (born Farrokh Bulsara) were from Valsad, as well as those of Field Marshal Sam Manekshaw. Multiple famous actors were also born in Valsad, such as Nirupa Roy and Bindu.

The first X-Factor Reality show in India gained a huge following, in both audience and participants. Of these participants, one set was from the city of Valsad - The Sajda Sisters. Three ladies of the Pandit family, they are highly renowned faces in musical groups in Valsad and all over Gujarat. Performing almost year-round in places around the globe, these family members are making their contributions in music and singing. Belonging to a regular family the trio went on to top three in the finale of X-Factor, the biggest music reality show.

Valsad is the setting for Kumayl Hasan Rizvi's novel Fairytale.

The city has two technical colleges, Government Polytechnic, which was established in 1965, and Government Engineering College, established in 2004. It has a Commerce college named SHAH N. H. Commerce college & B.K.M. Science college. it is also having B.C.A., B.sc Computer Science, B.Sc microbiology, PGDMLT, and B.B.A. named Dolat-Usha Institute of Applied Sciences and Dhiru-Sarla Institute of Management and Commerce.(Self-Finance) www.dolatusha.org. The city also has a prime Medical college, GMERS Medical college with a 800 bedded Civil Hospital.

Though the size of Valsad city is very small, it has a variety of educational facilities. There are many schools providing excellent English education, as well as a host of Gujarati Medium Schools.

Affiliated with the State Board

Affiliated with the CBSE

Affiliated with the ICSE

The city has a rail terminus for the Mumbai-Ahmedabad line and Mumbai-Delhi line of the Western Railway. Connected by the National Highway no. 8 (NH 8), Valsad is about 150 km north of Mumbai and about 100 km south of the city of Surat.

Valsad is a major railway station on the Mumbai-Vadodara mainline of Western Railways (WR) and is well connected by rail to all major cities in India. The present railway station building was established in 1925. Most trains on the route including the August Kranti Rajdhani Express have a scheduled halt at Valsad. Adjacent to the railway station is the Valsad Electric Loco Shed which houses over 100 electric locomotives. It is the only loco shed on WR which houses the AC/DC locomotives like WCAM-1 and WCAM-2, WCAM-2P and one of the only two in India (the other being Kalyan on Central Railways) to house AC/DC dual powered electric locomotives. Recently many WAG-5/5As have been homed at Valsad who are pure AC locomotives. Valsad has three platforms no 1,2,3 and there are almost 4-5 freight sidings. 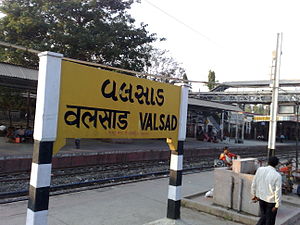 Cities and towns in Valsad district