The Varna culture belongs to the late Chalcolithic of northeastern Bulgaria. It is conventionally dated between 4400-4100 BC. It is contemporary and closely related with Gumelnița in southern Rumania, often considered as local variants.

It is characterized by polychrome pottery and rich cemeteries, the most famous of which are Varna Necropolis, the eponymous site, and the Durankulak complex, which comprises the largest prehistoric cemetery in southeastern Europe, with an adjoining coeval Neolithic settlement (published) and an unpublished and incompletely excavated Chalcolithic settlement.

294 graves have been found in the necropolis, many containing sophisticated examples of copper and gold metallurgy, pottery (about 600 pieces, including gold-painted ones), high-quality flint and obsidian blades, beads, and shells. The site was accidentally discovered in October 1972 by excavator operator Raycho Marinov. Research excavation was under the direction of Mihail Lazarov and Ivan Ivanov. About 30% of the estimated necropolis area is still not excavated.

The findings showed that the Varna culture had trade relations with distant lands, possibly including the lower Volga region and the Cyclades, perhaps exporting metal goods and salt from the Provadiya rock salt mine. The copper ore used in the artifacts originated from a Sredna Gora mine near Stara Zagora, and Mediterranean spondylus shells found in the graves may have served as primitive currency. 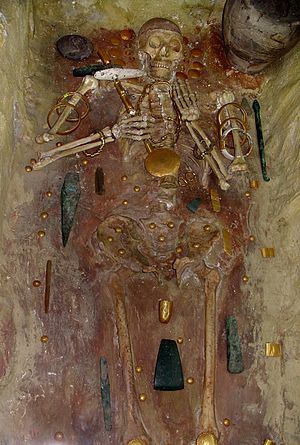 A burial at Varna, with some of the world's oldest gold jewellery.

Burials at Varna have some of the world's oldest gold jewelry. There are crouched and extended inhumations. Some graves do not contain a skeleton, but grave gifts (cenotaphs). Interestingly, the symbolic (empty) graves are the richest in gold artifacts. 3000 gold artifacts were found, with a weight of approximately 6 kilograms. Grave 43 contained more gold than has been found in the entire rest of the world for that epoch. Three symbolic graves contained masks of unfired clay.

The culture had sophisticated religious beliefs about afterlife and developed hierarchical status differences: it constitutes the oldest known burial evidence of an elite male. The end of the fifth millennium BC is the time that Marija Gimbutas, founder of the Kurgan hypothesis claims the transition to male dominance began in Europe. The high status male was buried with remarkable amounts of gold, held a war axe or mace and wore a gold penis sheath. The bull-shaped gold platelets perhaps also venerated virility, instinctive force, and warfare. Gimbutas holds that the artifacts were made largely by local craftspeople.

The discontinuity of the Varna, Karanovo, Vinča and Lengyel cultures in their main territories and the large scale population shifts to the north and northwest are indirect evidence of a catastrophe of such proportions that cannot be explained by possible climatic change, desertification, or epidemics. Direct evidence of the incursion of horse-riding warriors is found, not only in single burials of males under barrows, but in the emergence of a whole complex of Indo-European cultural traits. The original term for: 'Castes' in India was: 'Varna', meaning: 'Color', cognate to French: 'Vernis', and Spanish: 'Barniz' (both= Varnish).