Vasubandhu (Sanskrit; traditional Chinese: 世親; ; pinyin: Shìqīn; Wylie: dbyig gnyen) (fl. 4th to 5th century C.E.) was a very influential Buddhist monk and scholar from Gandhara. Vasubandhu was a philosopher who wrote on the Abhidharma from the perspectives of the Sarvastivada and Sautrāntika schools. Along with his half-brother Asanga, he was also one of the main founders of the Yogacara school after his conversion to Mahayana Buddhism.

Vasubandhu's Commentary on the Treasury of the Abhidharma (Abhidharmakośabhāṣya) is widely used in Tibetan and East Asian Buddhism as the major source for non-Mahayana Abhidharma philosophy. His philosophical verse works set forth the standard for the Indian Yogacara metaphysics of "appearance only" (vijñapti-mātra), which has been described as a form of "epistemological idealism", phenomenology[1] and close to Kant's Transcendental Idealism.[2] Apart from this he wrote several commentaries, works on logic, argumentation and devotional poetry.

Vasubandhu is one of the most influential thinkers in the Indian Buddhist philosophical tradition. In Jōdo Shinshū, he is considered the Second Patriarch and in Chan Buddhism, he is the 21st Patriarch.

Born a brahmin[3] in Peshawar, Vasubandhu was the half brother of Asanga, another key personage in the founding of the Yogacara philosophy. Vasubandhu's name means "the Kinsman of Abundance."[4] He and Asanga are members of the "Six Ornaments"[5] or six great commentators on the Buddha’s teachings. He was contemporaneous with Chandragupta I, father of Samudragupta. This information temporally places this Vasubandhu in the 4th century CE.[6] The earliest biography of Vasubandhu was translated into Chinese by Paramärtha (499-569). Vasubandhu initially studied with the Buddhist Sarvastivada (also called Vaibhāṣika, who upheld the Mahavibhasa) school which was dominant in Gandhara, and then later moved to Kashmir to study with the heads of the orthodox Sarvastivada branch there.[7] After returning home he lectured on Abhidharma and composed the Abhidharmakośakārikā (Verses on the Treasury of the Abhidharma), a verse distillation of Sarvastivada Abhidharma teachings, which was an analysis of all factors of experience into its constituent dharmas (phenomenal events). However Vasubandhu had also begun to question Sarvastivada orthodoxy for some time, and had studied with the Sautantrika teacher Manoratha. Due to this, he then went on to publish an auto-commentary to his own verses, criticizing the Sarvastivada system from a Sautrāntika viewpoint (also called Dārṣtāntika).[2]

He is later said to have converted to Mahayana beliefs under the influence of his brother Asanga, whereupon he composed a number of voluminous treatises, especially on Yogacara doctrines and Mahayana sutras. Most influential in the East Asian Buddhist tradition have been the Vimśatikāvijñaptimātratāsiddhi, the "Twenty Verses on Representation Only", with its commentary (Viṃśatikāvṛtti), the Triṃśikā-vijñaptimātratā, the "Thirty Verses on Representation-only" and the "Three Natures Exposition" (Trisvabhāvanirdeśa). Vasubandhu also wrote a texts on Buddhist Hermeneutics, the Proper Mode of Exposition (Vyākhyāyukti). Vasubandhu thus became a major Mahayana master, scholar and debater, famously defeating the Samkhya philosophers in debate in front of the Gupta king Chandragupta II at Ayodhya, who is said to have rewarded him with 300,000 pieces of gold.[8] Vasubandhu used the money he made from royal patronage and debating victories to built Buddhist monasteries and hospitals.

He was prolific, writing a large number of other works, including:

Erich Frauwallner, a mid-20th-century Buddhologist, sought to distinguish two Vasubandhus, one the Yogācārin and the other a Sautrāntika, but this view has largely fallen from favour in part on the basis of the anonymous Abhidharma-dīpa, a critique of the Abhidharmakośa which clearly identifies Vasubandhu as the sole author of both groups of writings.[9] According to Dan Lusthaus, "Since the progression and development of his thought ... is so strikingly evident in these works, and the similarity of vocabulary and style of argument so apparent across the texts, the theory of Two Vasubandhus has little merit."[10] Scholarly consensus on this question has generally moved away from Frauwallner's "two-authors" position.[11][12] 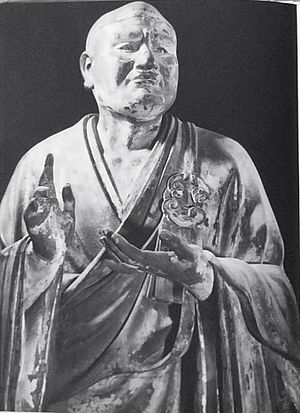 Vasubandhu's Verses on the Treasury of the Abhidharma contains a description of all 75 dharmas (phenomenal events), and then outlines the entire Sarvastivada doctrine including "meditation practices, cosmology, theories of perception, causal theories, the causes and elimination of moral problems, the theory of rebirth, and the qualities of a Buddha."[13] The Treasury and its commentary also expound all kinds of arguments relating to the Sarvastivada Abhidharma and critique those arguments from a Sautantrika perspective in the commentary. Major arguments include an extensive critique of the Self (Atman and Pudgala) and a critique of the Sarvastivada theory of "the existence of the dharmas of the three time periods [past, present and future]". In the Treasury, Vasubadhu also argued against a Creator God (Ishvara) and against the Sarvastivada theory of avijñaptirūpa ("unperceived physicality" or "invisible physicality").

Critique of the Self

Vasubandhu's critique of the Self is a defense of Buddhist Anatman doctrine, and also a critique of the Buddhist Personalist School and Hindu view of the soul. It is intended to show the unreality of the self or person as over and above the five skandhas (heaps, aggregates which make up an individual). Vasubandhu begins by outlining the soteriological motive for his argument, writing that any view which sees the self as having independent reality (e.g. the Hindu view) is not conductive to Nirvana.

Vasubandhu then critiques the idea of the Self from epistemic grounds (Pramana). Vasubandhu states that what is real can only be known from perception (Pratyakṣa) or inference (Anumāṇa). Perception allows one to observe directly the objects of the six sense spheres. Inference allows one to infer the existence of sense organs. However, there is no such inference for a solid real Self apart from the stream of constantly changing sense perceptions and mental activity of the sense spheres.[2]

Vasubandhu also argues that because the Self is not causally efficient, it is mere convention (prajñapti) and a “conceptual construction” (parikalpita). This argument is mainly against the Buddhist Pudgalavada school who held a view of a 'person' that was dependent on the five aggregates, yet was also distinct, in order to account for the continuity of personality. Vasubandhu sees this as illogical, for him, the Self is made up of constantly changing sensory organs, sense impressions, ideas and mental processes and any imagined unity of self-hood is a false projection.

Vasubandhu also uses this analysis of the stream of consciousness to attack non-Buddhist Hindu views of the Atman. Vasubandhu shows that the Hindu view of the Self as 'controller' is refuted by an analysis of the flux and disorder of mental events and the inability of the supposed Self to control our minds and thoughts in any way we would like. If the Self is truly an eternal un-caused agent, it should be unaffected by mere physical and mental causes, and it also seems difficult to explain how such a force existing independently outside of the mind could causally interact with it.[2] Vasubandhu also answers several common objections to the Buddhist not-self view such as how karma works without a Self and what exactly undergoes rebirth. Vasubandhu points to the causal continuum of aggregates/processes which undergoes various changes leading to future karmic events and rebirth.

During Vasubandhu's era Philosophy of time was an important issue in Buddhist philosophy. The Sarvāstivādin tradition which Vasubandhu studied held the view of the existence of dharmas (phenomenal events) in all three times (past, present, future). This was said to be their defining theoretical position, hence their name Sarvāstivāda is Sanskrit for "theory of all exists". In contrast to this eternalist view, the Sautrāntika school, a rival offshoot, held the doctrine of "extreme momentariness", a form of presentism (only the present moment exists).

In the Abhidharmakośakārikā, Vasubandhu puts forth the Sarvastivadin theory, and then in his commentary (bhasya) he critiques this theory and argues for the 'momentariness' of the Sautantrika school. He also later wrote the Karma-siddhi-prakaraṇa (Exposition Establishing Karma) which also expounded the momentariness view (kṣanika-vāda). Vasubandhu's view here is that each dharma comes into existence only for a moment in which it discharges its causal efficacy and then self destructs, the stream of experience is then a causal series of momentary dharmas. The issue of continuity and transference of karma is explained in the latter text by an exposition of the "container consciousness" (ālayavijñāna) which stores karmic seeds (Bīja) and survives rebirth.

According to Dan Lusthaus, Vasubandhu's major ideas are:[14]

Vasubandhu's main Yogacara works (Viṃśatikā and Triṃśikā) put forth the theory of "vijñaptimātra" which has been rendered variously as 'representation-only', 'consciousness-only' and 'appearance-only'. While some scholars such as Lusthaus see Vasubandhu as expounding a phenomenology of experience, others (Sean Butler) see him as expounding some form of Idealism similar to Kant or George Berkeley.[15]

The Twenty verses begins by stating:

In Mahayana philosophy...[reality is] viewed as being consciousness-only...Mind (citta), thought (manas), consciousness (chit), and perception (pratyaksa) are synonyms. The word "mind" (citta) includes mental states and mental activities in its meaning. The word "only" is intended to deny the existence of any external objects of consciousness. We recognize, of course, that "mental representations seem to be correlated with external (non-mental) objects; but this may be no different from situations in which people with vision disorders 'see' hairs, moons, and other things that are 'not there.'"[2]

One of Vasubandhu's main arguments in the Twenty verses is the Dream argument, which he uses to show that it is possible for mental representations to appear to be restricted by space and time. He uses the example of mass hallucinations (in Buddhist hell) to defend against those who would doubt that mental appearances can be shared. To counter the argument that mere mental events have no causal efficacy, he uses the example of a wet dream. Vasubandhu then turns to a mereological critique of physical theories, such as Buddhist atomism and Hindu Monism, showing that his appearance only view is much more parsimonious and rational.[2]

The Thirty verses also outlines the Yogacara theory of the Eight Consciousnesses and how each one can be overcome on the stages of enlightenment, turning consciousness (vijnana) into unmediated cognition (jnana) by cleansing the stream of consciousness from ‘contaminations' and ‘defilements.’ The Treatise on Buddha Nature was extremely influential in East Asian Buddhism by propounding the concept of tathagatagarbha (Buddha Nature).

According to Vasubandhu, the absolute, reality itself (dharmatā) is non-dual, and the dichotomy of perception into perceiver and perceived is actually a conceptual fabrication. For Vasubandhu, to say that something is non-dual is that it is both conceptually non-dual and perceptually non-dual.[2] To say that "I" exist is to conceptually divide the causal flux of the world into self and other, a false construct. Just the same, to say that an observed object is separate from the observer is also to impute a false conception into the world as it really is - perception only. Vasubandhu uses the analogy of a magician who uses a magic spell (dependent nature, conceptual construction) to make a piece of wood (the absolute, non-duality) look like an elephant (fabricated nature, duality). The basic problem for living beings who suffer is that they are fooled by the illusion into thinking that it is real, that self and duality exists, true wisdom is seeing through this illusion.[2]

Vasubandhu contributed to Buddhist logic and is held to have been the origin of formal logic in the Indian logico-epistemological tradition. Vasubandhu was particularly interested in formal logic to fortify his contributions to the traditions of dialectical contestability and debate. Anacker (2005: p. 31) holds that:

A Method for Argumentation (Vāda-vidhi) is the only work on logic by Vasabandhu which has to any extent survived. It is the earliest of the treatises known to have been written by him on the subject. This is all the more interesting because Vāda-vidhi marks the dawn of Indian formal logic. The title, "Method for Argumentation", indicates that Vasabandhu's concern with logic was primarily motivated by the wish to mould formally flawless arguments, and is thus a result of his interest in philosophical debate.[16]

This text also paved the way for the later developments of Dignaga and Dharmakirti in the field of logic.