Veraval is a Municipality and the headquarters of Gir Somnath district in the Indian state of Gujarat. It is 6 km from Somnath. 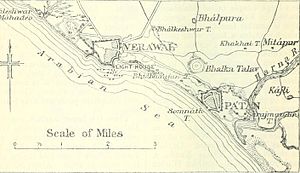 Veraval was founded in 13th or 14th century by Rao Veravalji Vadher, a Rajput. Veraval was once a fortified port town of the royal family of Junagadh. It was a part of the Kingdom of Junagadh till 1953 when Junagadh was merged with India. The city still bears some remnants of the old Nawabi heritage, the beautiful Nawabi summer palace being among them. There are ruins of the old Nawabi fort and Nawabi Gates in and around the place. The old walls of the port are now ruined, but the impressive Junagadh gate and the Patan gate are still seen, but are in a very bad state.

The Nawabi Palace with gothic features which is one of the main attractions. It is popularly known as Somnath College (the palace was converted into a college after it was abandoned by the Nawab). At present it is the building of a Sanskrit university. The town is often known as the gateway to the magnificent temple of Somnath and the pilgrimage centres of Prabhas Patan and Bhalkha. Veraval is also the nearest town to the Gir National Park (42 km away).

Before the rise of Surat, Veraval was the major seaport for pilgrims to Mecca. Its importance now is as a fishing port, one of the largest in India. Sea going dhows and wooden fishing boats are still being built by the Fishermen's without the use of any Hightech Machines. Traditional skills are passed down from father to son.[citation needed] About 25 km from the veraval a historical place is located at Savani village.

Veraval is located at Lua error in Module:Coordinates at line 668: callParserFunction: function "#coordinates" was not found..[2] It has an average elevation of 0 metres (0 feet).

Subhash road,M.G.Road,Bus station, Somnath road are some of the famous roads in Veraval.

Veraval has a hot semi-arid climate (Köppen climate classification BSh) with warm to hot temperatures throughout the year. Almost all precipitation falls during the summer monsoon season from June to September.

Veraval has a predominant Gujarati population. Amongst Gujaratis, the Kharwa, Ahir and the Kolis casts form a sizable part of the local population. In addition there are also significant populations of Turks, Rajwadi bhoi's, Hadi, Lohanas, Maleks, Memons, Patnis and Raykas. There is also a sizable population of Malayalees and Sindhis. Gujarati and Hindi are the most common languages in the town.

Fisheries have always been the main industries in the town and are dominanted by the Kharwas (fisherfolk). The fishing is done mostly on traditional boats and trawlers. Veraval also has a large boat making industry. Veraval is home to a large number of fish processing factories in G.I.D.C [expand acronym] which export prime quality seafood to USA, Japan, SE Asian, Gulf and EU Countries. The seafood-industry which was started through government initiative now is in its prime and many importers are attracted towards Veraval from around the globe. Regional research centers of CIFT and CMFRI situated at Veraval have done Yeoman service in development of fisheries sector in Gujarat.

Among all nationalised banks , Indian Bank , in front of Bhalka Tirth Temple, is the most favorable and popular bank doing its business. Recently , in sept 2015, Mr Amar Abhishek, an engineering graduate , has taken charge of Indian Bank, Veraval Branch.

Veraval also enjoyes a long coastline, lined with beaches. Beaches extend uninterrupted almost throughout the Veraval coast. Only a small portion of the beach has been commercialised and majority of the beach is still virgin. This Beaches are known for Beautiful Sunsets. 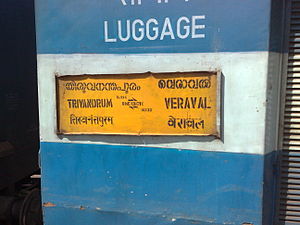 Veraval is a fairly busy railway station for Western Railways and is served by more than 13 pairs of regional and long-distance trains.

Daily (or multiple daily) trains connect it to major cities in Gujarat such as Ahmedabad, Bharuch, Jamnagar, Junagadh, Porbandar, Rajkot, Surat and Vadodara.

Daily connections are also available to many other towns in Gujarat such as Keshod, Jetalsar, Gondal, Wankaner, Surendranagar, Viramgam, Nadiad, Anand, Valsad, Vapi, Dahod and Godhra.

The nearest airports are Diu And Rajkot. Daily Flights connect Rajkot and Diu to Mumbai.