Carl Gustaf Verner von Heidenstam (6 July 1859 – 20 May 1940) was a Swedish poet, novelist and laureate of the Nobel Prize in Literature in 1916.[1] He was a member of the Swedish Academy from 1912.[2] His poems and prose work are filled with a great joy of life, sometimes imbued with a love of Swedish history and scenery, particularly its physical aspects.

He was born in Olshammar, Örebro County on 6 July 1859 to a noble family. He studied paintings in the Academy of Stockholm, but soon left because of ill health. He then traveled extensively in Europe, Africa and the orient.[3] He was at once greeted as a poet of promise on the publication of his first collection of poems,[4] Vallfart och vandringsår (Pilgrimage: the Wander Years, 1888). It is a collection of poems inspired by his experiences in the orient and marks an abandonment of naturalism that was dominant then in Swedish literature.

His love for beauty is showed also by the long narrative poem Hans Alienus (1892). Dikter ("Poems", 1895) and Karolinerna (The Charles Men, 2 vols., 1897–1898), a series of historical portraits of King Charles XII of Sweden and his cavaliers, shows a strong nationalistic passion.[5][6] English translations of short stories from Karolinerna can be found in the American-Scandinavian Review (New York), May 1914, November 1915, and July 1916.[4] The two volumes of Folkunga Trädet (The Tree of the Folkungs, 1905–07) are the inspired, epic story of a clan of Swede chieftains in the Middle Ages.

In 1910 a controversy was waged in Swedish newspapers between a number of Swedish literary men on the topic of the proletarian “degradation” of literature, the protagonists of the two opposing camps being August Strindberg and Heidenstam. Professors Lidforss and Böök also took part. Heidenstam's chief contribution was the pamphlet, directed chiefly against Strindberg, "Proletärfilosofiens upplösning och fall" ("The Decline and Fall of the Proletarian Philosophy").[7]

Heidenstam's poetical collection Nya Dikter, published in 1915, deals with philosophical themes, mainly concerning the elevation of man to a better humanity from solitude. 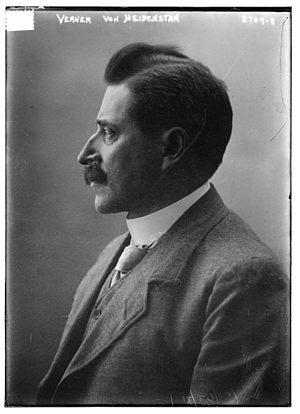