Verney Junction was an isolated station at a four-way railway junction in Buckinghamshire, open from 1868 to 1968; a junction existed through the site without a station from 1851.

The first line to open on the site was the Buckinghamshire Railway, which opened a line from Bletchley to Banbury in 1850; a line branching west to Oxford followed in 1851. This formed an east-west link from Oxford to Bletchley and Cambridge passing through Verney Junction and this, known as the Varsity line, became the busiest line through the site, leaving the line to Banbury as a relatively quiet branch. The last line to reach the station was the Aylesbury and Buckingham Railway (later owned by London Underground) towards Aylesbury and London, at which point a station was opened on the site. Soon after the Buckinghamshire Railway became absorbed into the London and North Western Railway.

The lines south to Aylesbury and north to Banbury closed to passengers in 1936 and 1964, but the station remained open until the Oxford-Cambridge line closed to passengers in 1968. The track was singled and then mothballed, but a disused track has remained through the station site. The line between Oxford and Bletchley is to be reopened by 2019, but because of its isolated location Verney Junction will not be reopened.

While never very busy, Verney Junction was an local interchange point for a century from which excursions as far as Ramsgate could be booked. Situated 50 miles (80 km) from Baker Street, the station is one of London's disused Underground stations and, although it never carried heavy traffic, the Aylesbury line was important in the expansion of the Metropolitan Railway into what became Metro-land. 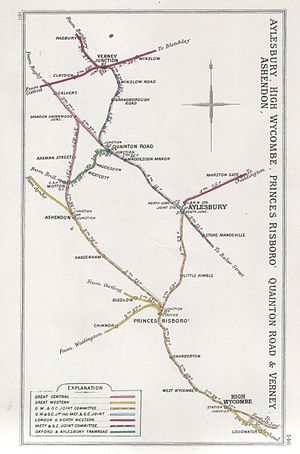 Verney Junction opened in 1868 as northern terminus of the Aylesbury and Buckingham Railway's (A&BR) single track from Aylesbury. The station was at a junction with the Buckinghamshire Railway's Bletchley to Oxford line, which was leased and operated by the LNWR before it acquired the route altogether in 1878. The station was built 1.75 miles (2.8 km) east of Steeple Claydon, and constructed to a rudimentary design at the cost of the A&BR, whose progress the LNWR viewed with disfavour.[1]

Plans to extend the railway north to Buckingham never materialised and Verney Junction remained remote with a few cottages for tenants of Claydon House estate. Claydon's occupant, Sir Harry Verney, was on the board of the A&BR which was chaired by the Duke of Buckingham, and he invested heavily in the scheme.[1] There being no settlement from which the station could take its name, it was named in honour of Sir Harry, who was later to have another nearby station – Calvert – named after him;[2][3] he had been born Harry Calvert, and took the surname Verney in order to inherit his late cousin's estates in 1827.[4][5]

The A&BR initially began advertising services to and from Banbury, Oxford and Bletchley but the LNWR attempted to isolate the A&BR by encouraging passengers to take its longer route to Aylesbury via Bletchley and Cheddington. The A&BR turned to the Great Western Railway (GWR), with whom it managed Aylesbury, to agree to services over the GWR's Wycombe Railway; the Wycombe line was converted to standard gauge on 23 October 1868 and A&BR services were reinstated.[6]

The GWR worked the A&BR for more than 20 years, turning down the chance to acquire it in 1874, although for the first six years the route was operated by the A&BR's own staff, except for footplate crews who were GWR employees.[7] Traffic was initially "almost non-existent" due to Verney Junction's rural locality,[8] but the Metropolitan Railway under the influence of Sir Edward Watkin nevertheless saw an opportunity for growth and absorbed the A&BR on 1 July 1891.[9] The A&BR would be the line that the London Extension of Watkin's Manchester, Sheffield and Lincolnshire Railway (MS&LR) would meet at Quainton Road.[10] In anticipation of the connection, the A&BR was doubled by 1897 and the Metropolitan extended its line from Chalfont Road to Aylesbury in 1892.[9] 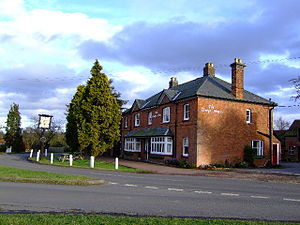 Verney Arms public house which opened in the 1890s and was known as "Station Hotel".

The Metropolitan opened another intermediate station on the A&BR at Waddesdon in 1897, adding to the three existing stations at Grandborough Road, Quainton Road and Winslow Road which had opened in 1868. A new Pullman service was introduced in 1910 as part of a drive to attract first-class paying passengers from the Great Central; two Pullman coaches named "Mayflower" and "Galatea" were used on alternate weeks between Verney Junction, Chesham and London.[13]

The Metropolitan was vested in the London Passenger Transport Board (LPTB) on 1 July 1933 and freight and passenger workings to Verney Junction continued in trains repainted with the London Transport lettering.[14] However, little over three years later, the LPTB decided to discontinue their services beyond Aylesbury and in consequence two Metropolitan outposts were closed — the Brill Tramway ended on 30 November 1935 and passenger services ceased between Quainton Road and Verney Junction on 6 July 1936 when the line was singled.[15] Freight services continued until 8 September 1947 when the line closed. The track to Winslow Road was used for stock storage until 1961.[16][17] 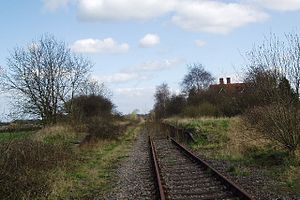 Although the two World Wars brought an increase in freight traffic from Verney Junction to London, with considerable volumes of freight passing through the station's transfer sidings, the post-war period saw a decline in the station's fortunes. The closure of the Aylesbury-Verney section by the LPTB in 1936, severing the connection to Buckingham, was followed by the removal of one of the line's tracks on 28 January 1940. In the same year, freight traffic through Verney Junction was substantially diminished by the construction on 14 September 1940 of a connecting spur between the LNWR and GCR lines at Calvert which enabled freight from the Oxford-Bletchley route to work south over the Great Central Main Line without having to pass over the Verney Junction-Quainton Road section.[12]

By the end of 1940, Verney Junction was effectively left "severed from its purpose",[18] having little usefulness other than as a rural interchange for local services. It played a useful part in the transfer of goods between the interconnecting lines, but passenger traffic declined in the face of the availability of more direct routes to and from Banbury and Oxford. Goods services were withdrawn in 1964 and later that year the line to Buckingham was closed. The station closed completely when all passenger services were withdrawn in 1968.

After closure, the track on the northern section of the A&BR between Verney Junction and Winslow Road was retained until 1961, including the former Metropolitan sidings which were subsequently used for storing veteran railway vehicles.[19][20]

The permanent way from Quainton Road to its connection with the Varsity Line has been closed and lifted. A single-track freight line from Bletchley to Bicester was retained and then abandoned in place in 1993;[21] the track remains rusted beyond use and in overgrown state, although modern signage still warns travellers to watch for approaching trains. Of the station itself, the stationmaster's house remains as a private residence and the station ticket office has become a private garage. The platform edges have also survived in a dilapidated state. The stationmaster's house's garden occupies the former Metropolitan trackbed.[22]

It is planned to re-open the line between Bicester Town and Bletchley in about 2019 as part of the East West Rail Link project but Verney Junction station is to remain closed as it would serve no significant settlement.