The Verrazano–Narrows Bridge (sometimes called simply the Verrazano Bridge) is a double-decked suspension bridge in the U.S. state of New York that connects the New York City boroughs of Staten Island and Brooklyn. It spans the Narrows, a body of water connecting the relatively protected upper bay with the larger, wide open lower bay.

The bridge is named for the Florentine explorer Giovanni da Verrazzano, whose name is misspelled on the bridge, as well as for the Narrows. In 1524, while in the service of Francis I of France, Verrazzano became the first European to enter New York Harbor and the Hudson River.[3] It has a central span of 4,260 feet (1,298 m) and was the longest suspension bridge in the world at the time of its completion in 1964, surpassing the Golden Gate Bridge by 60 feet, until it was in turn surpassed by 366 feet by the Humber Bridge in the United Kingdom in 1981. It has the eleventh longest main span in the world, while retaining its place as the longest bridge span in the Americas. Its massive towers can be seen throughout a good part of the New York metropolitan area, including from spots in all five boroughs of New York City and in New Jersey.

The bridge establishes a critical link in the local and regional highway system, and also marks the gateway to New York Harbor. All cruise ships and container ships arriving at the Port of New York and New Jersey must pass underneath the bridge and therefore must be built to accommodate the clearance under the bridge.[3] Since 1976, the Staten Island end of the bridge has been the starting point of the New York City Marathon.[4] 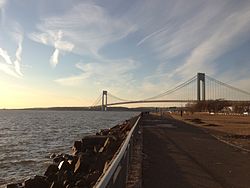 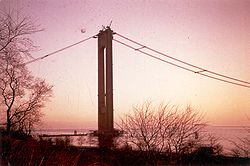 The bridge was the last great public works project in New York City overseen by Robert Moses, the New York State Parks Commissioner and head of the Triborough Bridge and Tunnel Authority. He had long desired the span as a means of completing the expressway system he had championed during his tenure. It was also the last project designed by Chief Engineer Othmar Ammann, who had designed most of the other major crossings into and within New York City, including the George Washington Bridge, the Bayonne Bridge, the Bronx Whitestone Bridge, the Triborough Bridge, and the Throgs Neck Bridge. The plans to build the bridge caused considerable controversy in the Brooklyn neighborhood of Bay Ridge, because many families had settled in homes in the area where the bridge now stands and were forced to relocate.

Fort Lafayette, an island coastal fortification in New York Harbor, built next to Fort Hamilton at the southern tip of what is now Bay Ridge, was destroyed as part of the bridge's construction in 1960; the Brooklyn-side bridge pillars now occupy the fort's former foundation.

New York City Mayor Robert F. Wagner cut the ribbon at the opening ceremony, which was attended by over 5,000 people. He was the first person to be driven over the bridge.[10] The lower deck opened on June 28, 1969.[11] The bridge was the longest suspension bridge in the world (previously held by the Golden Gate Bridge) from 1964 until 1981, when it was surpassed by the Humber Bridge in England.

In 2009, all 262 of the mercury vapor fixtures in the bridge's necklace lighting were replaced with energy efficient light-emitting diodes, years before the rest of New York City started to get LED streetlights.[12]

In 2014, the city began a major reconstruction project on the bridge. This includes replacing ramps, removing the divider on the upper deck and replacing it with a seventh lane.[13]

The Verrazano Bridge Memorial project was started by children and grandchildren of the civil engineers, architects, site engineers, technicians and New York City municipal employees who worked with Othmar H. Ammann and his staff during the various phases of design and construction, from 1958–64.

Researchers taking part in this collaborative project will conduct in-depth interviews with surviving participants involved in the conception and construction of the Verrazano Bridge to compile an "oral history" of the architectural landmark. On November 29, 2016, a commemorative plaque, in tribute to all the people associated with the construction of the bridge, will be revealed.[14]

The bridge is owned by the City of New York and operated by MTA Bridges and Tunnels, an affiliate agency of the Metropolitan Transportation Authority. Interstate 278 passes over the bridge, connecting the Staten Island Expressway with the Gowanus Expressway and the Belt Parkway. The Verrazano, along with the other three major Staten Island bridges, created a new way for commuters and travelers to reach Brooklyn, Long Island, and Manhattan by car from New Jersey. The bridge has fostered more traffic than the Outerbridge Crossing and the Goethals Bridge, both of which connect Staten Island with New Jersey. 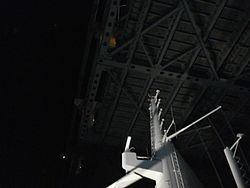 According to the U.S. Department of Transportation:

The bridge is affected by weather more than any other bridge in the city because of its size and isolated location close to the open ocean; it is occasionally closed, either partially or entirely, during strong wind and snow storms. Additionally, the bridge's two towers are the tallest structures in New York City outside of Manhattan, and are taller than the tallest non-Manhattan building, the 658-foot (201 m) One Court Square in Queens; its towers are also taller than the 604-foot (184 m) towers of the next tallest New York bridge, the George Washington Bridge. Because of the bridge's height, cruise ships and container ships that dock in New York City must be built to accommodate the clearance under the bridge. For example, the RMS Queen Mary 2 was designed with a flatter funnel to pass under the bridge, and has 13 feet (3.96 m) of clearance under the bridge during high tide.[3][17] 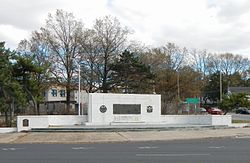 The naming of the bridge for Verrazzano was controversial. It was first proposed in 1951 by the Italian Historical Society of America, when the bridge was in the planning stage. After Robert Moses turned down the initial proposal, the society undertook a public relations campaign to re-establish the reputation of the largely forgotten Verrazzano and to promote the idea of naming the bridge for him. The campaign was largely the effort of Society director John N. LaCorte, who in 1954 successfully lobbied New York Governor W. Averell Harriman to proclaim April 17 (the anniversary of Verrazzano's arrival in the harbor) as Verrazzano Day. Subsequent efforts by LaCorte resulted in similar proclamations by governors of states along the East Coast. After these successes, LaCorte reapproached the Triborough Bridge and Tunnel Authority, but was turned down a second time. The manager of the authority, backed by Moses, said the name was too long and that he had never heard of Verrazzano.[18]

The society later succeeded in lobbying to get a bill introduced in the New York State Assembly that would name the bridge for the explorer. After the introduction of the bill, the Staten Island Chamber of Commerce joined the society in promoting the name. The bill was signed into law in 1960 by Governor Nelson Rockefeller.[19] Although the controversy seemed settled, the naming issue rose again in the last year of construction after the assassination of President John F. Kennedy. A petition to name the bridge for Kennedy received thousands of signatures. In response, LaCorte contacted United States Attorney General Robert Kennedy, the president's brother, who told LaCorte that he would make sure the bridge would not be named for his brother. (Idlewild Airport, New York's major international airport, was renamed after Kennedy instead.)[18]

Even so, the official name was widely ignored by local news outlets at the time of the dedication. Some radio announcers and newspapers omitted any reference to Verrazzano, referring to the bridge as the Narrows Bridge, or the Brooklyn-Staten Island Bridge. The society continued its lobbying efforts to promote the name in the following years until the name became firmly established. 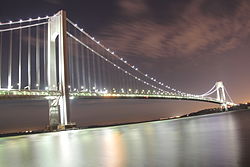 From 1964 to 1986, the toll was collected in both directions, until Staten Island residents concerned about pollution from idling vehicles called for one way tolls.[21] Accordingly, in 2010 eight of the unused Brooklyn-bound toll booths were removed in the first phase of a project to improve traffic flow at the toll plaza; the remaining three Brooklyn-bound toll booths were to be subsequently removed during the second phase of the construction project.[22] On February 2, 2012, the last of those eastbound tollbooths was removed.[23][24]

An urban legend has it that tolls were to be abolished once the bridge's construction bonds were paid off. In November 2014, The New York Times described the efforts[25] of the Staten Island Advance to dispel this mistaken belief.[26] 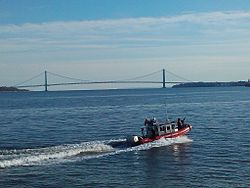 In 2008, about 190,000 vehicles used the bridge per day on average.[2] In 2011, Transportation for America rated the bridge as New York's most dangerous, because of the combination of deterioration and the 170,000 people who cross it per day.[27] The MTA responded that the bridge, which was the state's newest and longest, was structurally sound, and that the bridge had passed its most recent inspection. The MTA attributed Transportation for America's results as a "misinterpretation of inspection records".[28]

As the bridge was not built with a pedestrian walkway, non-motorized transportation is limited to using the bridge during special events such as the New York City Marathon and Five Boro Bike Tour.[29] In 1993 the New York City Department of City Planning called for a footpath across the bridge as part of their "Greenway Plan for New York City".[30] In 1997 the DCP released a feasibility study stating that two footpaths running between the suspender ropes along the upper level, separated for pedestrian and cyclist use, would cost a minimum of $26.5 million. The MTA at the time expressed concern about the "safety and liability inherent in any strategy that introduces pedestrian and bicycle access" to the bridge.[31] Recently, residents living on both ends of the bridge have lobbied for pedestrian access. In October 2003, Mayor Michael Bloomberg promised to look into establishing the long-awaited pedestrian and bicycle access.[32] The Harbor Ring Committee was formed in 2011 to advocate for the completion of the Harbor Ring route – a 50 mile path around New York Harbor, including a footpath across the Verrazano. In spring 2013 they began an on-line petition that generated more than 2,500 signatures, as well as an organizational sign-on letter with the support of 16 regional and local advocacy and planning organizations. On October 2, 2013 the MTA announced as part of its 2015–2034 Capital Needs Assessment that it would include a feasibility study for installing a pathway on the Verrazano.[33]

Signs at both ends of the bridge forbid photography and video taping; however, it is not certain if the signs are intended to stop people from stopping on the bridge or ban photography and videography even from moving cars. Due to numerous suicide attempts, a sign that says "Life Is Worth Living" along with a suicide hotline has been installed on the Staten Island approach. 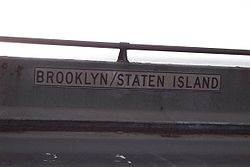