James Victor "Vic" Chesnutt (November 12, 1964 – December 25, 2009) was an American singer-songwriter from Athens, Georgia. His first album, Little, was released in 1990,[5] but his breakthrough to commercial success didn't come until 1996 with the release of Sweet Relief II: Gravity of the Situation, a tribute album of alternative artists covering his songs.[6]

Chesnutt released 17 albums during his career, including two produced by Michael Stipe, and a 1996 release on Capitol Records, About to Choke. His musical style has been described by Bryan Carroll of allmusic.com as a "skewed, refracted version of Americana that is haunting, funny, poignant, and occasionally mystical, usually all at once".[7]

Injuries from a 1983 car accident left him partially paralyzed; he used a wheelchair and had limited use of his hands.

An adoptee, Chesnutt was raised in Zebulon, Georgia, where he first started writing songs at the age of five. When he was 13, Chesnutt declared that he was an atheist, a position that he maintained for the rest of his life.[8]

At 18, a car accident left him partially paralyzed; in a December 1, 2009 interview with Terry Gross on her NPR show Fresh Air, he said he was "a quadriplegic from [his] neck down", and although he had feeling and some movement in his body, he could not walk "functionally" and that, although he realized shortly afterward that he could still play guitar, he could only play simple chords.[8] After his recovery he left Zebulon and moved to Nashville, Tennessee; the poetry he read there (by Stevie Smith, Walt Whitman, Wallace Stevens, W. H. Auden, Stephen Crane, and Emily Dickinson) served to inspire and influence him.[9]

Around 1985, Chesnutt moved to Athens and joined the band, La-Di-Das, with future member of the Dashboard Saviors Todd McBride.[9][10] After leaving that group, he began performing solo on a regular basis at the 40 Watt Club; it was there that he was spotted by Michael Stipe of R.E.M.. Stipe went on to produce Chesnutt's first two albums, Little (1990) and West of Rome (1991).[9]

In 1993, Chesnutt was the subject of filmmaker Peter Sillen's independently produced documentary, Speed Racer: Welcome to the World of Vic Chesnutt, which was shown on PBS. Chesnutt also had a small role as "Terence" in the 1996 Billy Bob Thornton movie Sling Blade, which he later described self-mockingly as a poor performance.[10]

In 1996, Chesnutt was exposed to a wider audience with the release of the tribute album Sweet Relief II: Gravity of the Situation, the proceeds from which went to the Sweet Relief Fund. The album consisted of Chesnutt covers by famous musicians including Cracker, Garbage, The Smashing Pumpkins (with Red Red Meat), Madonna, R.E.M., Soul Asylum, and Live.

Vic played the part of Terence in the 1996 movie, "Sling Blade," which was written and directed by Billy Bob Thornton.

For the 2007 edition of the Vienna International Film Festival (Viennale), New York filmmaker Jem Cohen was commissioned to close the festival, which he did with his program entitled, "Evening’s Civil Twilight In Empires Of Tin." An impressionistic narrative was constructed through live readings from the texts of Joseph Roth and a live musical score performed by Vic Chesnutt, members from Thee Silver Mt Zion Memorial Orchestra, Guy Piciotto (Fugazi), and The Quavers. The music includes improvisations, wonderfully blown-out interpretations of Johann Strauss I’s “Radetzky March”, and bracing renditions of a number of Vic Chesnutt songs. The result is a sort of agit-prop hallucination, a string of film vignettes bound by the poetry of Roth’s writing and by the sounds and songs of the live musicians. A DVD of the program was released in 2009. 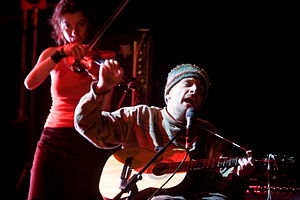 Vic collaborated with Bob Mould to record a version of Gram Parsons' song, "Hickory Wind," which appeared on the 1993 compilation, Conmemoritivo: A Tribute to Gram Parsons.

He recorded with many other groups and artists. He made two albums with fellow Athens group Widespread Panic, under the name of brute. Chesnutt wrote "Aunt Avis" and co-wrote "Blight", "Protein-Drink/Sewing-Machine", which are often performed live by Widespread Panic.[11][12] "Aunt Avis" appeared on WSP's album Bombs & Butterflies, and Chesnutt made a guest appearance as well.[13] The 1997 video for "Aunt Avis" was directed by Billy Bob Thornton and featured Chesnutt.[13]

After getting to know engineer Scott Stuckey during the recording of West of Rome,[14] Stuckey and Chesnutt became close friends and would go on to collaborate on various projects including producing two more albums together,[15][16] co-writing "Weed to the Rescue" for the Hempilation album,[17] as well as working on numerous videos including "Ladle" for Capitol Records. At the time of his death, Chesnutt and Stuckey were working on a documentary about Chesnutt's music. The film, tentatively titled "Degenerate", was scheduled to be released in 2012.[18]

Chesnutt's 1998 album The Salesman and Bernadette was recorded with alt-country group Lambchop as the backing band. The album Merriment was a collaborative effort between Chesnutt and Kelly and Nikki Keneipp, with Chesnutt writing and singing the songs, and the Keneipps playing the music.

Vic was featured singing on the title track of Elf Power's 2004 release, Walking With the Beggar Boys.

In the winter of 2006, he recorded North Star Deserter at the Hotel2Tango in Montreal. It was released on September 11, 2007 by Constellation Records. The record included contributions from Constellation artists Thee Silver Mt. Zion Memorial Orchestra & Tra-La-La Band, members of Godspeed You! Black Emperor, as well as Fugazi's Guy Picciotto. The album was produced by documentary filmmaker Jem Cohen.[19]

In 2008, Athens, Georgia based Elephant 6 collective recording artists Elf Power collaborated with Chesnutt on the album Dark Developments, released as Vic Chesnutt, Elf Power, and the Amorphous Strums. The "amorphous strums" refers to Curtiss Pernice and Sam Mixon, who also played on the album.[20]

In 2009, he sang on the track "Grim Augury" from the album Dark Night of the Soul by Danger Mouse of Gnarls Barkley, Sparklehorse, and director David Lynch. Mark Linkous had previously attempted to collaborate with Chesnutt on previous Sparklehorse albums such as Good Morning Spider however Chesnutt was unable to feature in person on the album. Instead, a recorded voice message he left Linkous apologising for his inability to show was used on the song "Sunshine".

Chesnutt's first four albums were released on the independent Texas Hotel label. He then recorded About to Choke (1996) for Capitol Records. The Salesman and Bernadette (1998) was on PolyGram; Merriment (2000) was on the Backburner Records label; spinART was the label for the self-performed and recorded Left to His Own Devices (2001). Chesnutt then found a home at the New West Records label, which released two of his albums. In 2004, New West also re-released the early Texas Hotel recordings, including expanded liner notes and extra tracks. in 2010: About to Choke was re-released on 180 gram vinyl on the Four Men with Beards label and is being distributed by City Hall Records.

Vic sang another, much older, classic song, "Home on the Range," based on the poem, "The Western Home," written in 1872 by Dr. Brewster M. Higley, on another CD featuring various artists entitled, "Rudy's Rockin' Kiddie Caravan," produced by Turner Network Television. Proceeds from the sale of the CD went to support the National Center for Family Literacy.

Chesnutt was also a supporter of medical marijuana,[23] which he said helped with his medical problems. He contributed the track, "Weed to the Rescue," to the 1998 Hempilation II charity album, with proceeds going to NORML, an American organization dedicated to marijuana legalization.

Chesnutt wrote and provided vocals on the song, "Aunt Avis" on Widespread Panic's 2001 album, "Bombs & Butterflies" (a solo demo of Chesnutt performing the song was included as a bonus track on the 2004 re-release of his 1993 album, "Drunk").

Vic frequently performed Daniel Johnston's song, "Like a Monkey in a Zoo," during live performances. Chesnutt recorded a version of the song that was released on the 2004 compilation CD, The Late Great Daniel Johnston: Discovered Covered.

He also appeared as a guest musician on Cowboy Junkies' 2007 album Trinity Revisited, a 20th anniversary remake of the Junkies' classic album The Trinity Session. In 2011 Cowboy Junkies released Demons, an album of eleven Chesnutt covers.

On December 25, 2009, at the age of 45, Chesnutt died from an overdose of muscle relaxants that had left him in a coma in an Athens hospital.[6] In his final interview, which aired on National Public Radio 24 days before his death, Chesnutt said that he had "attempted suicide three or four times [before]. It didn't take."[8]

According to him in the same interview, being "uninsurable" due to his quadriplegia, he was $50,000 in debt for his medical bills, and had been putting off a surgery for a year ("And, I mean, I could die only because I cannot afford to go in there again. I don't want to die, especially just because of I don't have enough money to go in the hospital.").[8]

Tina Chesnutt became the sole executor of his estate following his suicide.

Kristen Hersh wrote a book entitled, Don't Suck, Don't Die: Giving Up Vic Chesnutt, which was published by University of Texas Press and released on October 1, 2015.