Virachand Gandhi (Gujarati: વીરચંદ ગાંધી; Hindi: वीरचंद गाँधी) (25 August 1864 – 7 August 1901)[1] was a Jain scholar who represented Jainism at the first World Parliament of Religions in 1893.[2] A barrister by profession, he worked to defend the rights of Jains, and wrote and lectured extensively on Jainism, other religions, and philosophy.

Gandhi was born in Mahuva, Gujarat, India on 1864.[3] His father, Raghavji Tejpalji Gandhi, was a businessman.[2][4] A polyglot who reputedly spoke fourteen languages, Gandhi was educated as a lawyer.[2][3][5] In 1885, at the age of 21, he became the first honorary secretary of the Jain Association of India.[5]

During his term, he fought against a tax being levied by the ruler of Princely State of Palitana on pilgrims visiting Mount Shatrunjaya, Palitana.[3] During the course of this fight Gandhi met Lord Reay, the British colonial governor of Bombay, and Colonel John Watson of the Kathiawar Agency. With the help of these two individuals, he ultimately negotiated an annual fixed payment of Rs. 15000, rather than an individual tax on each pilgrim.[4]

Gandhi also fought to close a pig slaughterhouse that had been started in 1891 close to Mount Shikharji, a holy place of Jain pilgrimage. Gandhi spent six months in Calcutta learning Bengali and preparing his case against the slaughterhouse. He was eventually successful in getting the slaughterhouse closed.[3]

Trip to the World Parliament of Religions 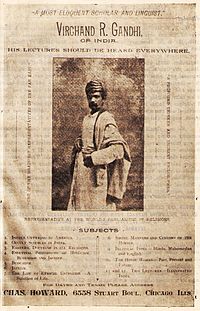 Poster calling Gandhi 'a most eloquent scholar and linguist'

Gandhi represented Jainism at the first World Parliament of Religions, held in Chicago in 1893.[3] His statue still stands at the Jain temple in Chicago.

Jain monk Acharya Vijayanandsuri, also known as Acharya Atmaram, had initially been invited to represent Jainism at the Parliament, but as Jain monks do not travel overseas, he could not attend. Atmaram recommended Gandhi to go in his stead and serve as the emissary for the religion. Atmaram and his disciple Vallabhsuri trained Gandhi for six months. Gandhi received a positive response at the Parliament[3][4] and was asked to deliver more lectures. He ultimately stayed two years in the US and one year in the UK[3] He went outside India to promote Jain values on two other occasions,[3] and is known for giving about 535 lectures on Jainism and having attracted followers from outside India to Jainism.[3] He was awarded various medals for his lectures.[3]

Strangers in This Land by E. Allen Richardson mentions this Parliament and Gandhi's subsequent interview with The New York Times.

He was a contemporary to Swami Vivekanand, who deeply admired him. He faced criticism over his sea voyage, which was at the time considered unholy. Vivekanand, impressed with Gandhi's adherence to vegetarianism in the face of the cold Chicago climate, came to his defence: in an 1894 letter to Haridas Viharidas Desai, Diwan of Junagadh, he wrote "Now here is Virchand Gandhi, the Jain whom you knew well in Bombay. This man never takes anything but mere vegetables even in this terribly cold climate and tooth and nail tries to defend his countrymen and the religion. The people of this country like him very well. But what are they doing who sent him over? They are trying to outcast him.”

The American newspaper, the Buffalo Courier, wrote regarding Gandhi, "of all Eastern scholars, it was this youth whose lectures on Jain Faith and Conduct was listened to with the greatest interest and attention". Later, in Kasadova, he delivered a lecture on 'Some Mistakes Corrected' on 8 August 1894, which prompted the citizens of the city to award him a gold medal.[6]

At the Parliament Gandhi said:

You know, my brothers and sisters, that we are not an independent nation, we are subjects of Her Gracious Majesty Queen Victoria, 'defender of the faith'. But if we are a nation in all that name implies, with our own government and our own rulers, with our laws and institutions controlled by us, free and independent, I affirm that we should seek to establish and forever maintain peaceful relations with all the nations of the world." "It is an astonishing fact that foreigners have been constantly attacking India and in the face of all this aggression the soul of India has stood vital and watchful. Her conduct and religion are safe and the whole world looks at India with a steady gaze." He added "Cultural distinctions, agriculture, art, artistic skill, literature, good conduct, means of knowledge, science, hospitality, feminism, love, and respect – all these are found in India in quite a different form. If that culture was purchasable, England would have purchased it, adopted it. But it has not happened, it cannot happen.

Gandhi had studied Buddhism, Vedanta Philosophy, Christianity, and western philosophy. He praised Mogul Emperor Akbar for his equal treatment of all religions.

Gandhi propagated the relevance of Jain tenets and Mahavira's message of nonviolence. He delivered about 535 speeches on Jainism, other religions, and social and cultural lives in India, all of which received wide publication. He was invited two more times, first in 1897, and then in 1899 to the West.[2] 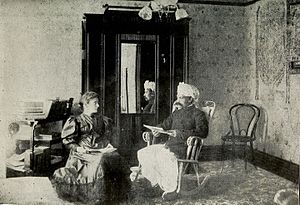 Virchand Gandhi teaching Jainism to lady in US, 1893

Gandhi founded Gandhi Philosophical Society and the Society for the Education of Women in India (SEWI). He participated in Pune session of Indian National Congress in 1895 as a representative of Bombay state,[2][3] and lectured on Indian politics and industry in Large Hall of William Science building on 19 December 1898. He also participated at the International Conference of Commerce in 1899 and represented Asia.[3] He settled tax disputes of Palitana and Shikharji piggery case.[2]

Gandhi died at the age of thirty-seven[3] of haemorrhaging of the lungs on 7 August 1901 at Mahuwar, near Mumbai, India.[1][2] He was remembered on 1993 Parliament of World religions.[3]