The Vishnu Purana (Viṣṇu Purāṇa) is a religious Hindu text and one of the eighteen Mahapuranas. It is considered one of the most important Puranas and has been given the name Puranaratna (gem of Puranas). Vishnu Purana includes many stories well known in Vedic tradition, including the various avatars of God Vishnu and the life of his complete incarnation, Krishna. Presented as a dialogue between Parashara and his disciple Maitreya and divided into six parts, the major topics discussed include creation, stories of battles fought between asuras and devas, the Avatars (divine descents) of Vishnu and genealogy and stories of legendary kings. Vishnu Purana ascribes its authorship to Veda Vyasa. The Padma Purana categorizes Vishnu Purana as a Sattva Purana (Purana which represents goodness and purity).[1]

In Vishnu Purana, worship of Vishnu has been given a lot of importance. Vishnu Purana puts forward that the worship of Vishnu could enable man to obtain the consummation of all earthly or materialistic desires and leads man to attain moksha or liberation from cycle of births and deaths in the material world.

Similar to Bhagavata Purana, Vishnu Purana declares Vishnu or Narayana as Para Brahman Supreme God who creates unlimited universes and enters each one of them as Lord of Universe.[2] God Narayana engages in creation of 14 worlds within the universe as Brahma when he deliberately accepts rajas guna. God Narayana himself sustains, maintains and preserves the universe as Vishnu when he accepts sattva guna and annihilates the universe at the end of maha-kalpa as Shiva or Rudra when he accepts tamas guna.[3][4][5] According to this reference, the holy Trimurti is non-different from God Narayana or Vishnu. 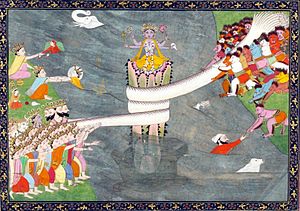 The extant text comprises six aṃśas (parts) and 126 adhyāyas (chapters). The first part has 22 chapters, the second part consists 16 chapters, the third part comprises 18 chapters and the fourth part has 24 chapters. The fifth and the sixth parts are the longest and the shortest part of the text, comprising 34 and 8 chapters respectively.[6]

The text starts with detailed stories of creation and introduces the concept of four yugas. The tale of Rudra, an elaborate story of the Samudra Manthana, or the churning of the ocean, the Story of Dhruva, an ardent devotee of Vishnu, and stories of ancient kings Vena and Prithu are also discussed in the first section. Tales of Prithu's descendants, the Prachetas, the famous story of Hiranyakashipu and Prahlada, some topological details of the known world with mentions of lands, tribes, mountains and rivers, concepts of the universe, and the stories of the many births of Jadabharata are the major topics discussed in the next book. The third section discusses the stories of Manvantara (cycles of creation and destruction), the sages Vyasa and Yajnavalkya, Surya (the sun god), Yama (the god of the dead), devotees Shatadhanu and Shaivya, the four classes (varnas) and the four stages of life (ashramas) and details of many rituals. The fourth section gives a detailed account of all the famous Kings from the solar and lunar dynasties of ancient India, and also lists the names of kings who 'would appear' in the age of Kali (demon). The second list contains the name of historical kings of Magadha, including kings from the Shishunaga, Nanda and Maurya dynasties. The next section details the different events in the life of Lord Sri Krishna, starting from His birth, through His childhood, until the moment He left the earth and the prominent destruction of the Yadava clan. The sixth and last section mainly discusses the impending age of Kali, the concepts of universal destruction that would eventually follow, and the importance of the Puranas in general.

“The kings of Kali Yug will be addicted to corruption and will seize the property of their subjects. Then property and wealth alone will confer rank; falsehood will be the only means of success. Corruption will be the universal means of subsistence. In the end, unable to support their avaricious kings, the people of the Kali Yug will take refuge in the chasms between mountains.”

The Vishnudharmottara Purana, a separate text dedicated to the arts, is a Supplement or Appendix to the Vishnu Purana.

Vishnu Purana is attributed to Parashara, as the first narrator.[7][8] Vishnu Purana in its current version contains a genealogy of the rulers of the Gupta Empire, and therefore its final version could not have been written before 320 CE.[9]

The composition dates of Vishnu Purana mentioned by the various scholars include: