In phonetics, voice-onset time (VOT) is a feature of the production of stop consonants. It is defined as the length of time that passes between the release of a stop consonant and the onset of voicing, the vibration of the vocal folds, or, according to other authors, periodicity. Some authors allow negative values to mark voicing that begins during the period of articulatory closure for the consonant and continues in the release, for those unaspirated voiced stops in which there is no voicing present at the instant of articulatory closure. 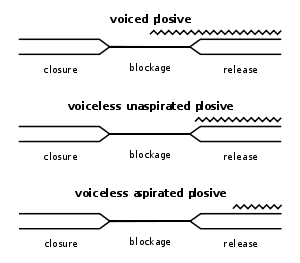 A graphical representation of the VOT of voiced, tenuis, and aspirated stops

The concept of Voice-Onset Time can be traced back as far as in the 19th century, when Adjarian (1899: 119)[1] studied the Armenian stops, and characterized them by the "relation qui existe entre deux moments : celui où la consonne éclate par l'effet de l'expulsion de l'air hors de la bouche, ou explosion, et celui où le larynx entre en vibration" (relation that exists between two moments: the one when the consonant bursts when the air is released out of the mouth, or explosion, and the one when larynx starts vibrating). However, the concept will become "popular" only in the 1960s, in a context described by Lin & Wang (2011: 514):[2] "At that time, there was an ongoing debate about which phonetic attribute would allow voiced and voiceless stops to be effectively distinguished. For instance, voicing, aspiration, and articulatory force were some of the attributes being studied regularly. In English, "voicing" can successfully separate /b, d, ɡ/ from /p, t, k/ when stops are at word-medial positions, but this is not always true for word-initial stops. Strictly speaking, word-initial voiced stops /b, d, ɡ/ are only partially voiced, and sometimes are even voiceless." The concept of VOT will finally acquire its name in the famous study of Lisker & Abramson (1964).[3]

A number of problems arose in defining VOT in some languages, and there is a call for reconsidering whether this speech synthesis parameter should be used to replace articulatory or aerodynamic model parameters which do not have these problems, and which have a stronger explanatory significance.[4] As in the discussion below, any explication of VOT variations will invariably lead back to such aerodynamic and articulatory concepts, and there is no reason presented why VOT adds to an analysis, other than that, as an acoustic parameter, it may sometimes be easier to measure than an aerodynamic parameter (pressure or airflow) or an articulatory parameter (closure interval or the duration, extent and timing of a vocal fold abductory gesture). 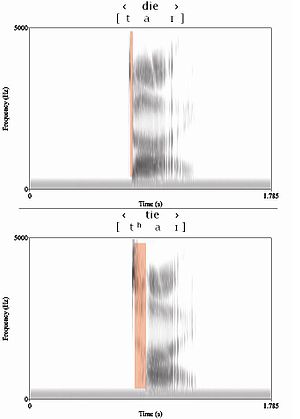 Voice-Onset Timing spectrograms for English "die" and "tie". The voiceless gap between release and voicing is highlighted in red. Here the phoneme /t/ has a VOT of 95 ms., and /d/ has one of 25 ms.

Three major phonation types of stops can be analyzed in terms of their voice-onset time.

Because neither aspiration nor voicing is absolute, with intermediate degrees of both, the relative terms fortis and lenis are often used to describe a binary opposition between a series of consonants with higher (more positive) VOT, defined as fortis, and a second series with lower (more negative) VOT, defined as lenis. Of course, being relative, what fortis and lenis mean in one language will not in general correspond to what they mean in another.

Voicing contrast applies to all types of consonants, but aspiration is generally only a feature of stops and affricates.

Aspiration may be transcribed ⟨◌ʰ⟩, long (strong) aspiration ⟨◌ʰʰ⟩. Voicing is most commonly indicated by the choice of consonant letter. For one way of transcribing pre-voicing and other timing variants, see extensions to the IPA#Diacritics. Other systems include that of Laver (1994),[5] who distinguishes fully devoiced ⟨b̥a⟩ and ⟨ab̥⟩ from initial partial devoicing of the onset of a syllable by ⟨˳ba⟩ and from final partial devoicing of the coda of a syllable by ⟨ab˳⟩.