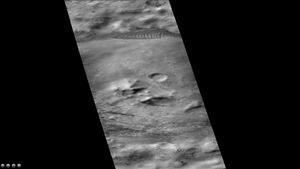 Von Kármán Crater, as seen by CTX camera (on Mars Reconnaissance Orbiter). Dark parts near the top are dunes. 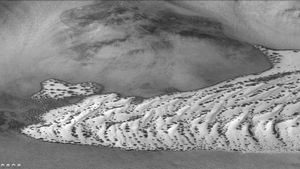 Defrosting dunes in Von Kármán Crater, as seen by CTX camera (on Mars Reconnaissance Orbiter). Dark places are where frost has left dark dunes. Picture taken in the springtime on Mars.

Von Kármán Crater is an impact crater in the Argyre quadrangle of Mars, located at 64.6°S latitude and 58.5°W longitude. It is 90.0  km in diameter and was named after Theodore von Kármán, and the name was approved in 1973.[1][2] The crater contains a large field of dunes. Usually, the dunes are very dark because they contain the dark volcanic rock basalt. However, in the winter they are become covered with frost. The pictures below show the frost disappearing.

Dark spots appear on dunes in the higher latitudes of Mars.

Sometimes geysers form near the spots. They have two main features (dark dune spots and spider channels) that appear at the beginning of the Martian spring on dune fields covered with carbon dioxide (CO2 or 'dry ice'), mainly at the ridges and slopes of the dunes; by the beginning of winter, they disappear. Dark spots' shape is generally round, on the slopes it is usually elongated.[3][4]

In these spots mineral grains may be covered with a thin film of water that may affect chemical weathering of minerals and may help possible Martian organisms to survive. Studies have shown that thin films of water could exist at times on the Martian surface at certain times and in certain locations. In places, thin layers of liquid water could be present for 38 sols (Martian days) in the warmer periods of the day.[5][6] With the stronger sunshine of spring in certain regions, carbon dioxide gas jets shoot dark dust in the air. This dark dust will increase the absorption of light and cause the temperature to rise to where water can exist for short periods.[7]