Vratislaus (or Wratislaus) II (Czech: Vratislav II.) (d. 14 January 1092), the son of Bretislaus I and Judith of Schweinfurt, was the first King of Bohemia as of 15 June 1085. The royal title was merely a lifetime grant from Holy Roman Emperor Henry IV, however, and was not hereditary. Before being raised to the royal dignity, he had ruled Bohemia as duke since 1061.

On his father's death in 1055, Vratislaus became duke of Olomouc. He fell out with his brother Spytihněv II and was exiled to Hungary. Vratislaus regained his Moravian ducal throne with Hungarian assistance and eventually reconciled with his brother and succeeded him as duke of Bohemia.

Vratislaus was an ally of the Emperor Henry IV. He supported Henry in both the Investiture Controversy against the popes and the rebellions in Saxony that dominated his long reign. Pope Gregory VII, having already gained the support of Bolesław II of Poland, was keen on roping in the duke of Bohemia to surround the emperor with adversaries fighting for the church. The pope confirmed Vratislaus in the privilege of wearing the mitre and tunic which his predecessors had. The pope also expressed gratitude for the regular payment of tribute to the Holy See.

Vratislaus was often at odds with his brother Jaromír, the bishop of Prague, and he wore his religious vestments around the bishop to irritate him. Jaromír, for his part, ignored the creation of a new Moravian diocese by Vratislaus in 1063. Jaromir even went so far as to take by arms the relics removed from Prague to Moravia. Despite the pope's support for Vratislaus' new see, the Bohemian duke was unswayed in his loyalty to the emperor.

The Saxons revolted under Duke Magnus of Saxony and Otto of Nordheim, Duke of Bavaria, in 1070 and Boleslaus of Poland attacked Bohemia in 1071. In August 1073, Henry responded with an invasion of Poland, but a new Saxon revolt drew him back in 1075. Vratislaus joined him, and they defeated the rebels on 9 June at the First Battle of Langensalza. The Bohemian troops showed conspicuous bravery. Henry then took Jaromír to Germany to be his chancellor under the name of Gebhard and Vratislaus was greatly relieved.

Vratislaus also took part in the wars against the anti-kings who opposed Henry's rule and were elected by a faction of the nobility to replace him. At the Battle of Flarchheim, only through the aid of Vratislaus' contingent was the imperial army capable of overcoming the rebels of the papally-approved claimant Rudolf of Rheinfelden, Duke of Swabia. Vratislaus even succeeded in seizing Rudolf's golden sword. The golden sword was then carried in front of Vratislaus on state occasions.

Relations with the papacy

Vratislaus raised an army to serve in Henry's Italian campaign of 1081. In 1083, Vratislaus and his Bohemians were with Henry when they entered Rome itself.

Despite his serving an excommunicated emperor, Vratislaus maintained good relations with the papacy. Nonetheless, Gregory refused to grant Vratislaus permission to use the Slavonic liturgy. Never, however, did Vratislaus link his fate with that of Henry's antipope, Clement III. 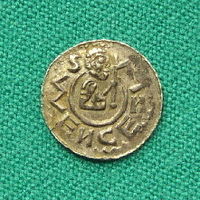 Vratislaus coveted the largely Slavic marches of Meissen and Lusatia, but, in spite of Henry's promises and Bohemian successes against the rebellious margraves, he never received them. He held Lower Lusatia between 1075 and 1086, but in 1088, with the insurrection of Egbert II of Meissen, Henry granted the region to Henry of Ostmark. Vratislaus was thereafter cool to Henry's military adventures. He never wavered in his loyalty, but he abstained from giving the emperor martial aid.

It was a Přemyslid tradition that Moravia would be entrusted to the younger brothers of the ruling prince. In Vratislaus' case, his two younger brothers Conrad and Otto inherited Brno and Olomouc and the youngest, Jaromír, entered the church. However, enmity grew between the brothers. It was then that Vratislaus founded the diocese of Olmütz (diocese of Olomouc), under the Archbishopric of Mainz, to counter Otto's authority within his province. Both pope and emperor took a hand in mediating the conflict, which was partially fixed with Henry's appointment of Jaromír as chancellor in 1077. In April 1085, a reichstag convened in Mainz suppressed the Moravian see, but Vratislaus later re-founded see. Jaromír protested in Rome to Pope Urban II, but died in 1090 before a pope ruled on the matter.

Sadly for Vratislaus, his last years were occupied by dynastic quarrelling. When his brother Otto died in 1086, he gave Olomouc to his son Boleslaus, which was seen to be an act against the interests of Conrad. Vratislaus raised an army against Conrad and sent it out under his other son Bretislaus. This son turned on him. Vratislaus, in keeping with Bohemian custom, designated an heir: Conrad. Thus reconciled, the two attacked Bretislaus, who fled to Hungary.

Vratislaus died of a hunting wound on 14 January 1092 after a reign of thirty years. He was buried in St. Peter and Paul′s Church, Vyšehrad.[1]

By (re)creation of the Bishopric of Olomouc (1063) and creation of the Vyšehrad Chapter (1070 - richly endowed, independent from the Prague bishop, subjected directly to the Holy See) and also by his obstinacy in conflict with the Prague bishop Jaromír, Vratislaus ultimately little depressed importance of bishop of Prague in domestic Bohemian politics, enabling thus more unified rule over the country for all following dukes and kings. Vratislaus's policy towards the Holy Roman Empire set an example to follow for the next (12th) century, leading ultimately to permanent elevation of Bohemia to kingdom in the beginning of 13th century. His marriage policy not only shows the rising position of Premyslids among European dynasties (Vratislaus's father Bretislaus had to abduct his wife Judith of Schweinfurt in 1019), but also set direction for his followers (as to dynastic bonds to pursue towards Poland and Hungary).

Vratislaus was married three times. His first wife Maria died during premature childbirth. He married the second time in 1057 to Adelaide, daughter of Andrew I of Hungary, who died in 1061. They had four children:

In 1062, Vratislaus married a third time to Swatawa of Poland, a daughter of Casimir I of Poland. They had five children: