From Infogalactic: the planetary knowledge core
(Redirected from Vuillard)
Jump to: navigation, search

Jean-Édouard Vuillard, the son of a retired captain, spent his youth at Cuiseaux (Saône-et-Loire); in 1878 his family moved to Paris in modest circumstances. After his father's death in 1884, Vuillard received a scholarship to continue his education. In the Lycée Condorcet Vuillard met Ker Xavier Roussel (also a future painter and Vuillard's future brother in law), Maurice Denis, musician Pierre Hermant, writer Pierre Véber, and Lugné-Poe.

In 1885, Vuillard left the Lycée Condorcet. On the advice of his closest friend, Roussel, he refused a military career and joined Roussel at the studio of painter Diogène Maillart. There, Roussel and Vuillard received the rudiments of artistic training. In 1887, after three unsuccessful attempts, Vuillard passed the entrance examination for the École des Beaux-Arts.[1] Vuillard kept a private journal from 1888–1905 and later from 1907–40.[citation needed]

Les Nabis and after 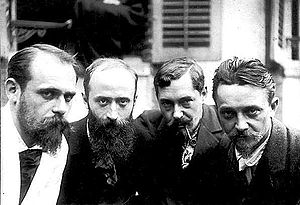 By 1890, the year in which Vuillard met Pierre Bonnard and Paul Sérusier, he had joined the Nabis, a group of art students inspired by the synthetism of Gauguin.[2] He contributed to their exhibitions at the Gallery of Le Barc de Boutteville, and later shared a studio with fellow Nabis Bonnard and Maurice Denis. In the early 1890s, he worked for the Théâtre de l'Œuvre of Lugné-Poe designing settings and programs.

In 1898 Vuillard visited Venice and Florence. The following year he made a trip to London. Later he went to Milan, Venice and Spain. Vuillard also traveled in Brittany and Normandy.

Vuillard first exhibited at the Salon des Indépendants of 1901 and at the Salon d'Automne in 1903. In the 1890s Vuillard met the brothers Alexandre and Thadée Natanson, the founders of La Revue Blanche, a cultural review. Vuillardʹs graphics appeared in the journal, together with Pierre Bonnard, Henri de Toulouse-Lautrec, Félix Vallotton and others.[3] In 1892, on the advice of the Natanson brothers, Vuillard painted his first decorations ("apartment frescoes") for the house of Mme Desmarais. Subsequently he fulfilled many other commissions of this kind: in 1894 for Alexandre Natanson, in 1898 for Claude Anet, in 1908 for Bernstein, and in 1913 for Bernheim and for the Théâtre des Champs-Élysées. The last commissions he received date to 1937 (Palais de Chaillot in Paris, with Bonnard) and 1939 (Palais des Nations in Geneva, with Denis, Roussel and Chastel).

In his paintings and decorative pieces, Vuillard depicted mostly interiors, streets, and gardens. Marked by a gentle humor, they are executed in the delicate range of soft, blurred colors characteristic of his art. Living with his mother, a dressmaker, until the age of sixty, Vuillard was very familiar with interior and domestic spaces. Much of his art reflected this influence, largely decorative and often depicting very intricate patterns.

In 1912, Vuillard painted Théodore Duret in his Study, a commissioned portrait that signaled a new phase in Vuillard's work, which was dominated by portraiture from 1920 onwards.[4]

Vuillard served as a juror with Florence Meyer Blumenthal in awarding the Prix Blumenthal, a grant given between 1919–1954 to young French painters, sculptors, decorators, engravers, writers, and musicians.[5] 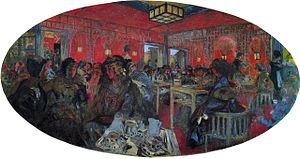 In 2013 the BBC television program Fake or Fortune? investigated a painting owned by British scriptwriter Keith Tutt, which both Tutt and the previous owners, Mr & Mrs Warren, believed to be a Vuillard. The vertical oval painting, which depicts a café scene, was thought to be one a group of three paintings commissioned from Vuillard in 1918 to decorate a new Parisian café, "Le Grand Teddy", named after American president Teddy Roosevelt. The main painting of the commission, a large horizontal oval work depicting a busy café interior (currently privately owned and kept in secure storage in Geneva, Switzerland) was at the time the only one of the three known to still exist and to have been fully confirmed as a genuine Vuillard. With assistance from art experts, the program undertook an exhaustive investigation and analysis of the Tutt painting, as well as carrying out extensive research to establish the painting's provenance. After submitting all the evidence to a committee at the secretive and highly conservative Wildenstein Institute in Paris, Tutt and the Fake or Fortune? team learned that the committee had unanimously agreed it was genuine.