From Infogalactic: the planetary knowledge core
Jump to: navigation, search
For the district, see Würzburg (district). For the radar system, see Würzburg radar. 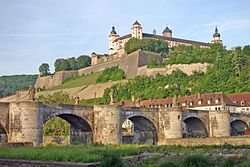 Fortress Marienberg with Old Main Bridge in the front 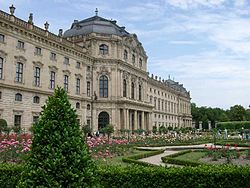 listen); Main-Franconian: Wörtzburch) is a city in the region of Franconia, Northern Bavaria, Germany. Located on the Main River, it is the capital of the Regierungsbezirk of Lower Franconia. The regional dialect is Franconian.

Würzburg lies about equi-distant from Frankfurt am Main and from Nuremberg (each about 120 kilometers or 75 miles away). Although the city of Würzburg is not part of the Landkreis Würzburg, (i.e. the county or district of Würzburg), it is the seat of the district's administration. The city had a population of 124,698 as of 31 December  2013[update]. 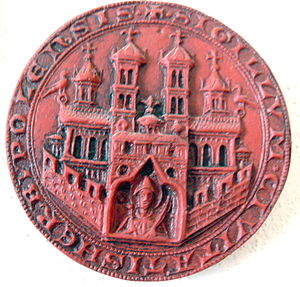 Impression of the city seal of 1319 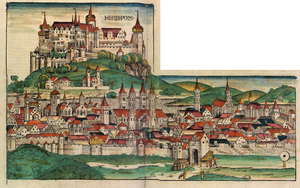 A Bronze Age (Urnfield culture) refuge castle stood on the site of the present Fortress Marienberg. The former Celtic territory was settled by the Alamanni in the 4th or 5th century, and by the Franks in the 6th to 7th. Würzburg was the seat of a Merovingian duke from about 650. It was Christianized in 686 by Irish missionaries Kilian, Kolonat and Totnan. The city is mentioned in a donation by Duke Hedan II to bishop Willibrord, dated 1 May 704, in castellum Virteburch. The Ravenna Cosmography lists the city as Uburzis at about the same time.[2] The name is presumably of Celtic origin, but based on a folk etymological connection to the German word Würze "herb, spice", the name was Latinized as Herbipolis in the medieval period.[3]

Beginning in 1237, the city seal depicted the cathedral and a portrait of Saint Kilian, with the inscription SIGILLVM CIVITATIS HERBIPOLENSIS. It shows a banner on a tilted lance, formerly in a blue field, with the banner quarterly argent and gules (1532), later or and gules (1550). This coat of arms replaced the older seal of the city, showing Saint Kilian, from 1570.[4]

The first diocese was founded by Saint Boniface in 742 when he appointed the first bishop of Würzburg, Saint Burkhard. The bishops eventually created a duchy with its center in the city, which extended in the 12th century to Eastern Franconia. The city was the seat of several Imperial Diets, including the one of 1180, in which Henry the Lion was banned from the Empire and his duchy was handed over to Otto of Wittelsbach. Massacres of Jews took place in 1147 and 1298.

The first church on the site of the present Würzburg Cathedral was built as early as 788, and consecrated that same year by Charlemagne; the current building was constructed from 1040 to 1225 in Romanesque style. The University of Würzburg was founded in 1402 and re-founded in 1582. The citizens of the city revolted several times against the prince-bishop, until decisively defeated in 1400.

The Würzburg witch trials, which occurred between 1626 and 1631, are one of the largest peace-time mass trials. In Würzburg, under Bishop Philip Adolf an estimated number between 600 and 900 alleged witches were burnt.[5] In 1631, Swedish King Gustaf Adolf invaded the town and destroyed the castle.

In 1720, the foundations of the Würzburg Residence were laid. The city passed to the Electorate of Bavaria in 1803, but two years later, in the course of the Napoleonic Wars, it became the seat of the Electorate of Würzburg, the later Grand Duchy of Würzburg. In 1814, the town became part of the Kingdom of Bavaria and a new bishopric was created seven years later, as the former one had been secularized in 1803 (see also Reichsdeputationshauptschluss).

On the eve of the Nazis' rise to power, 2,000 Jews lived in Würzburg; it was a community of tradesmen and professionals. Würzburg was a rabbinic center and home to many Jewish communal organisations and the Jewish Teachers Seminary. In November 1941, the first Jews from Würzburg were sent to the Nazi concentration camps in Eastern Europe. The final transport departed in June 1943. Few survived.[6]

On 16 March 1945, about 90% of the city full of civilians (and military hospitals) was destroyed in 17 minutes by 225 British Lancaster bombers during a World War II air raid. All of the city's churches, cathedrals, and other monuments were heavily damaged or destroyed. The city center, which mostly dated from medieval times, was totally destroyed in a firestorm in which 5,000 people perished.

Over the next 20 years, the buildings of historical importance were painstakingly and accurately reconstructed. The citizens who rebuilt the city immediately after the end of the war were mostly women – Trümmerfrauen ("rubble women") – because the men were either dead or still prisoners of war. On a relative scale, Würzburg was destroyed to a larger extent than was Dresden in a firebombing the previous month.

On 3 April 1945, Würzburg was occupied by the U.S. 12th Armored Division and US 42nd Infantry Division in a series of frontal assaults masked by smokescreens. The battle continued until the final Wehrmacht resistance was defeated on 5 April 1945.[7][8]

Würzburg is located on both sides of the river Main in the region of Lower Franconia in Bavaria, Germany. The main body of the town is on the eastern (right) bank of the river. The town is completely enclosed by the Landkreis Würzburg, but is not a part of it.

Würzburg covers an area of 87.6 square-kilometres and lies at an altitude of around 177 metres. [9]

The centre of Würzburg is surrounded by hills. To the west lies the 266 metre Marienberg and the Nikolausberg (359 m) to the south of it. The Main flows through Würzburg from the south-east to the north-west.

Würzburg is divided into 13 Stadtbezirke which are additionally structured into 25 boroughs. In the following overview, the boroughs and their numbers are allocated to the 13 municipals.

Würzburg is mainly known as an administrative center. Its largest employers are the Julius-Maximilians-University and the municipality. The largest private employers are Brose Fahrzeugteile followed by Koenig & Bauer, a maker of printing machines. Würzburg is also the capital of the German wine region Franconia which is famous for its mineralic dry white wines especially from the Silvaner grape. Würzburger Hofbräu brewery also locally produces a well-known pilsner beer.

Würzburg is home of the oldest Pizzeria in Germany. Nick di Camillo opened his restaurant named Bier- und Speisewirtschaft Capri on 24 March 1952.[11] Mr Camillo received the honor of the Italian Order of Merit.

Following World War II, Würzburg was host to the U.S. Army's 1st and 3rd Infantry Divisions as well as an Army Hospital and various other U.S. military units that maintained a presence in Germany. The last troops were withdrawn from Würzburg in 2008, thus concluding more than 60 years of U.S. presence there.

Major festivals include the Africa Festival in May, the Mozart Festival in June/July and the Kiliani Volksfest in mid-July. 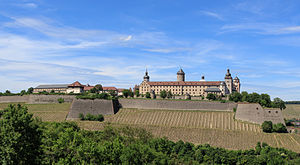 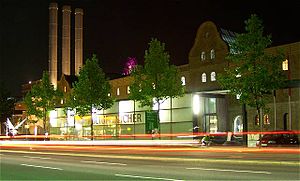 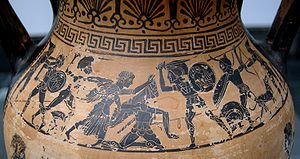 Black-figure Etruscan amphora in the Martin-von-Wagner-Museum.

Basketball player Dirk Nowitzki grew up in Würzburg. Nowitzki and numerous other German national team players started their careers at the local Baskets Würzburg club that plays in the Basketball Bundesliga as of 2016[update]. In the past, the club played at international competitions such as the Eurocup.

SV Würzburg 05 is a swimming and water polo club, active in the German Water Polo League.

Würzburg has several internationally recognized institutions in science and research: 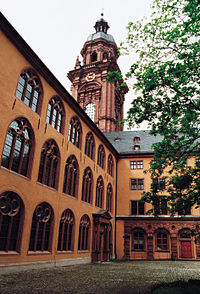 The University of Würzburg (official name Julius-Maximilians-Universität Würzburg) was founded in 1402 and is one of the oldest universities in Germany.

Today, the ten faculties are spread throughout the city. The university currently enrolls approximately 22,000 students, out of which more than 1,000 come from other countries.

With nearly 8,000 students it is the second largest university of applied science in Franconia.

The Conservatory of Würzburg is an institution with a long tradition as well as an impressive success story of more than 200 years. It was founded in 1797 as Collegium musicum academicum and is Germany’s oldest conservatory. Nowadays it is known as University of Music Würzburg. After the commutation from conservatory to university of music in the early 1970s, science and research were added to complement music education.

The "Fraunhofer ISC" in Würzburg is part of the Fraunhofer Society, Europe’s largest application-oriented research organization. It develops materials for tomorrow’s products, offering cooperation to small and medium-sized enterprises and to large-scale industrial companies.

Würzburg is home to the daily newspaper de (Main-Post (newspaper); Main-Post). Radio stations like de (Antenne Bayern) and state broadcaster Bayerischer Rundfunk have local studios. The latter also maintains a large broadcasting station at de (Frankenwarte) on the Nikolausberg. The private stations de (106,9 Radio Gong; Radio Gong) and de (102,4 Radio Charivari; Radio Charivari) are based in Würzburg. The TV branch of Bayerischer Rundfunk has its Studio Mainfranken in the town. de (TV touring) is a local private TV station.[13]

The city is located near the intersection of the Autobahns A 3 and A 7. Bundesstraße 8 passes through the town.

The city's main station is at the southern end of the Hanover-Würzburg high-speed rail line and offers frequent InterCityExpress and InterCity connections to cities such as Frankfurt, Cologne, Nuremberg, Munich, Hanover or Hamburg. It also is an important hub in the regional rail network. 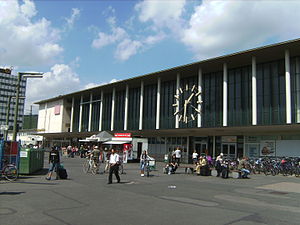 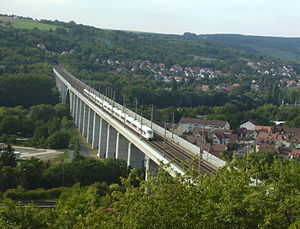 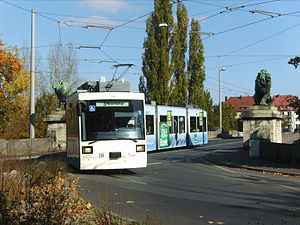 Würzburg tram crosses the river Main on the Löwenbrücke

Würzburg has a tram network of five lines with a length of 19.7 kilometres (12.2 miles).

The proposed Line 6 from Hauptbahnhof (Main Station) to Hubland university campus via Residenz is scheduled to be completed after 2018.

The Main river flows into the Rhine and is connected to the Danube via the Rhine-Main-Danube Canal. This makes it part of a trans-European waterway connecting the North Sea to the Black Sea.

Designated bicycle paths are located throughout the city and the Main-Radweg long-distance bicycle trail passes through the old town.

The local public utility is de (Würzburger Versorgungs- und Verkehrs-GmbH) supplying power, natural gas and water as well as public transportation and parking services. It also owns a majority stake in the port and runs local garbage collection/recycling. de (Heizkraftwerk Würzburg) is owned by the utility. 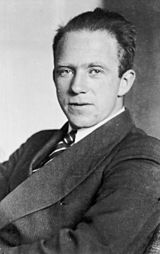 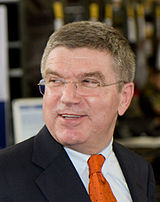 Würzburg is twinned with: